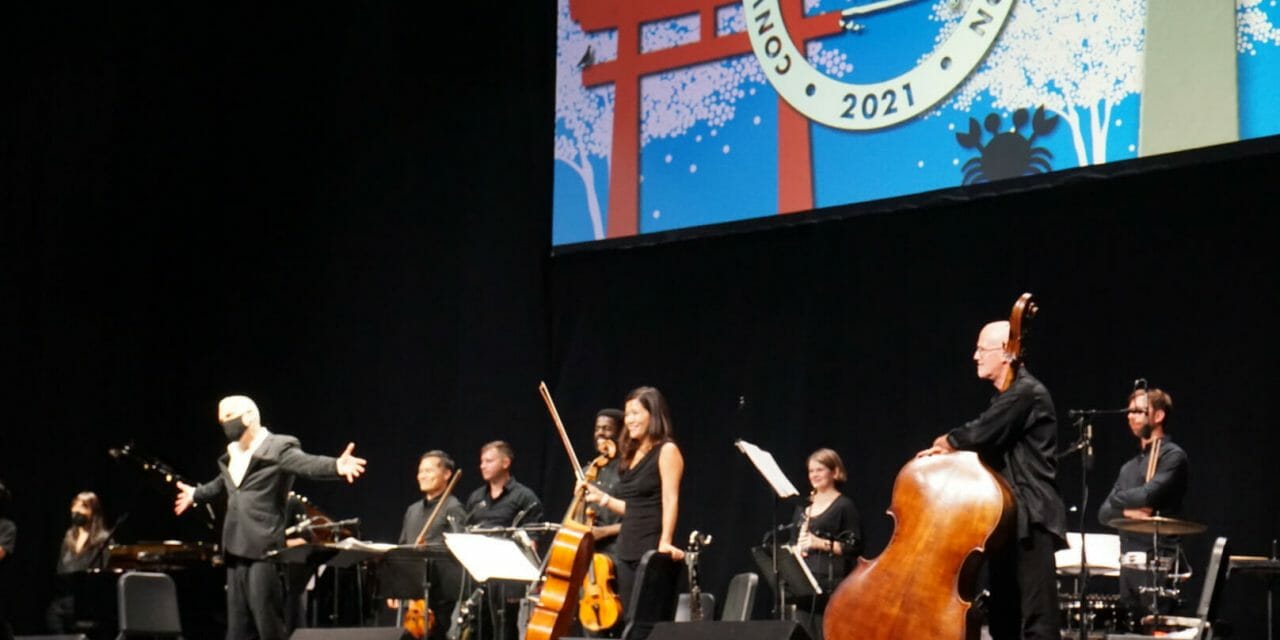 It was late in the day, and Otakon had already gone from a sleepy gathering to a buzzing hive of activity. Attendees, clad in their shared uniform of lanyard and surgical mask, rushed from one end of the convention center to the other, their paths feeling comfortably familiar to trace. Some followed the lure of the Dealer’s Room and Artist’s Alley, others checked their schedules while waiting for panels, and a few just lingered in the facility’s endless concourses. The overall event was lively from start to finish—but even so, I experienced a collective sense of “off-ness” that was increasingly impossible to ignore. Was it COVID? Was it caution, the masks interfering with communication, or maybe a wide-ranging sense of being socially out of practice?

Exactly what this “off-ness” was, and the forms it took, proved difficult to pinpoint, but the feeling was palpable throughout the Main Events hall, where a capacity crowd had been seated to await the start of OPENWORLD: a concert adapting exemplary video game themes to a chamber ensemble. The normal buzz and chatter of the pre-show audience seemed abnormally muted, to the point that a baby that was in the rear of the room could be heard giggling and calling out in adorable, random outbursts. As the lights dimmed and the band took the stage, the room let out a polite round of applause that grew louder as Eric Roth took the stage. The baby happily yelled “hi!” to welcome the composer.

The show began with an arrangement of Sonic the Hedgehog’s iconic Green Hill Zone theme. The piece was playful and upbeat, with syncopated drum beats and bass providing a more-than-capable replacement for the Yamaha YM2612 sound chip that drove the Sega Genesis’ distinct sound. The violins and piano, meanwhile, played the part of the chirpy main melody, adding a new dimension to the warbling synths that defined childhoods for gamers of a certain age. 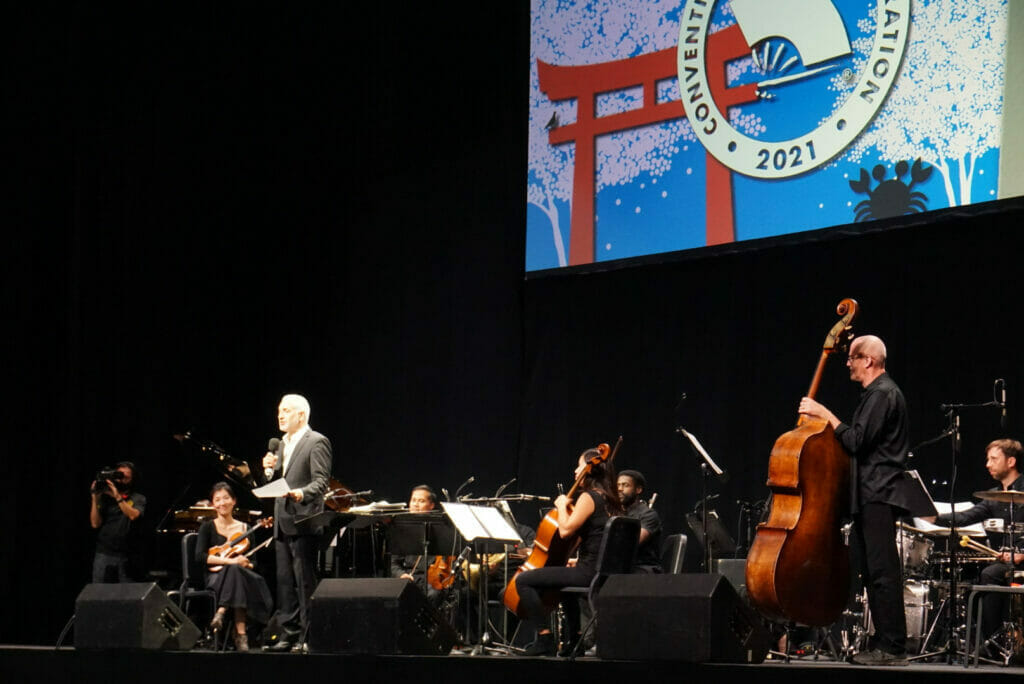 The audience applauded politely as the piece finished, and Roth turned to address the room for the first of many times. He radiated a palpable, almost infectious enthusiasm as he proclaimed “we’ll be performing music from the ’90s! From the noughties, and newer music as well!”

On cue, the flutist broke into a familiar melody: Sidon’s Theme from The Legend of Zelda: Breath of the Wild. The pianist joined moments later, eliminating any remaining doubts as to the piece’s identity. For this arrangement, the piano and flute handled the main melody, with a jingling tambourine accompanying them for rhythm. Plucked violins and bass provided a thrumming undercurrent through the early measures, before giving way to a refrain that swelled with bravado.

The piece immediately gave way to a new arrangement of Bonetrousle from Undertale. The piece felt rock-inspired, with bass and drums providing a sharp rhythm against the energetic strings. 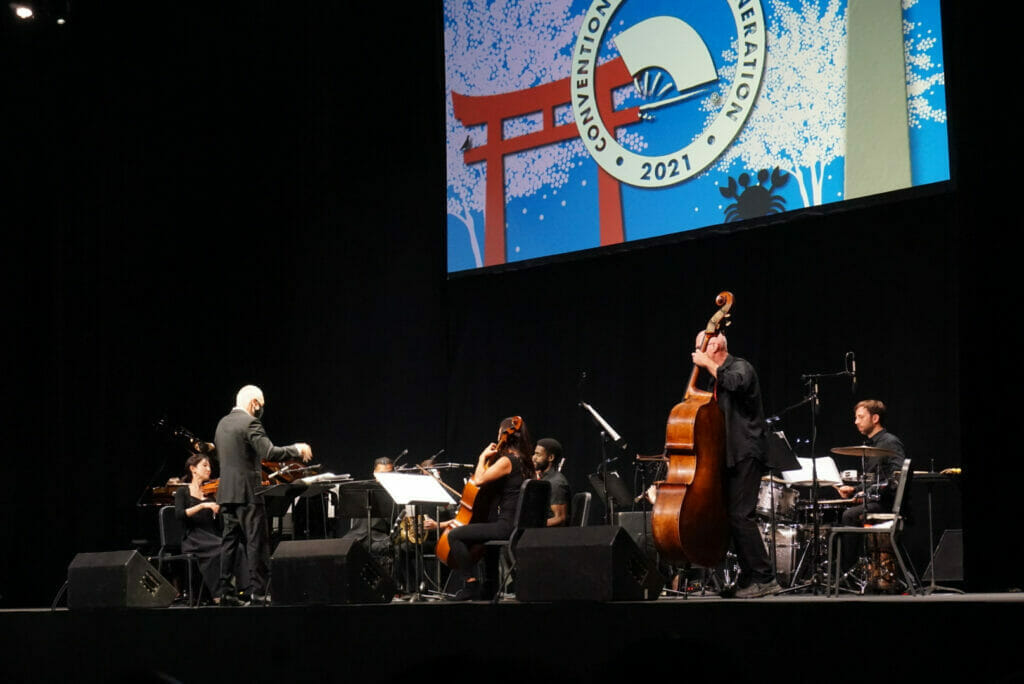 Eyes were bright as Roth paused to encourage the band to take a bow.  “I’d like to take a moment to just express my joy that we’re all here today,” he said. “For the first time in two years, we’re here, together, in celebration.”

The room erupted in open cheers of joy, and the crowd took on an entirely different personality as Roth introduced the next piece, which he introduced as reminding us of “the beauty that is the VGM journey.”

Roth turned back to the band, and a violin intro gave way to plucked strings clarinet:  the seminal notes from Donkey Kong Country 2’s Stickerbush Symphony. The lively arrangement quickly swelled as bass and cello joined the backline, while a chirping flute provided an assertive accent. French horn and piano provided a gorgeous melodic counterpoint, with each section building on the already delightful update to David Wise’s classic composition.

By now fully thawed, the crowd cheered eagerly for the musicians. The band didn’t skip a beat, jumping straight into a mournful rendition of Enclosure from Metal Gear Solid. The piece was pure delight, with percussive bass and swelling cello providing a much-appreciated richness to the melody. 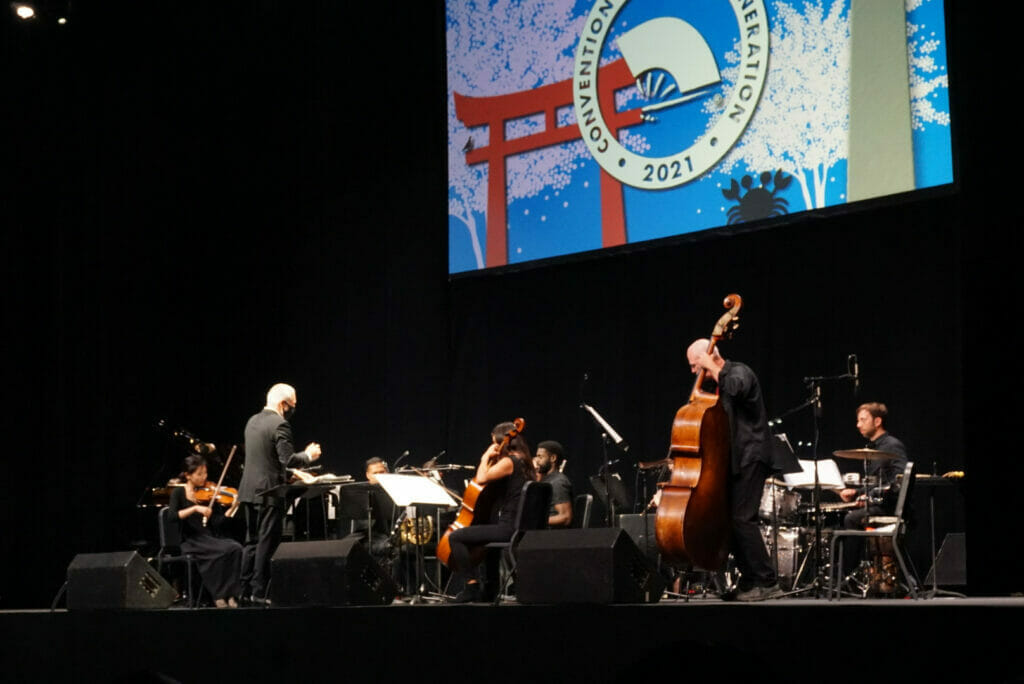 Roth then took a moment to honor the band once more, as he did periodically through the rest of the show.  “Please forgive me,” he said at one point, “but I’m going to keep acknowledging these wonderful musicians.”

The concert continued into Halo’s On A Pale Horse. The opening was deliciously frantic, with sharp strings and plucked cello providing an electric sense of urgency, while the excellent violin soloist provided a dark melodic undercurrent.

The mood shifted as the band launched into an arrangement of the unmistakably jovial  “Powerful Mario” from Super Mario 64. Roth’s conducting had been a joy to witness throughout the show, but he was especially fun for this one, dancing while directing the ensemble. His groove infected the musicians and audience both, and the lively piece ended with joyous applause.

Roth turned to the audience once more. “That one was for each of you,” he smiled. “Each of you—each of you is powerful!” It was impossible to not smile back, and judging by the expressions of our neighbors, we weren’t the only ones who felt that way.  “It’s powerful to be together,” he added, “and to share these experiences. Solidarity, my friends. Solidarity!”

The show continued into a trilogy of pieces, beginning with Aloy’s Theme from Horizon: Zero Dawn, which transitioned into a haunting rendition of Silent Hill’s Blood Tears. 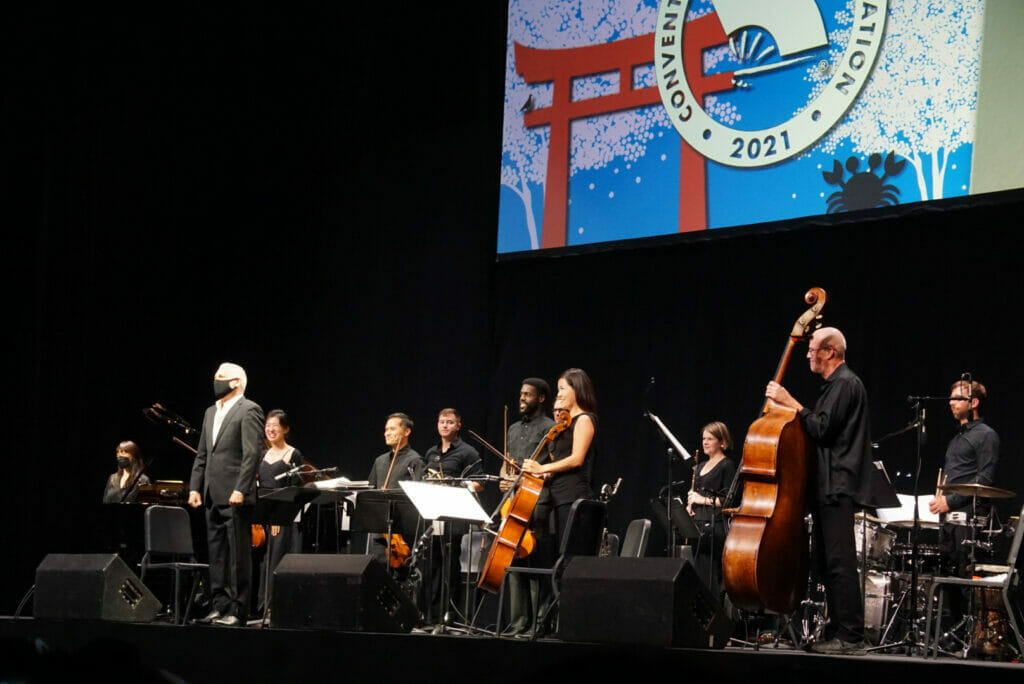 The melancholy of these pieces was quickly dispelled as the group jumped into a bombastic, playful rendition of Ducktales’ emblematic The Moon theme. The modulating synth that defined the chiptune classic was ably substituted by a dueling piano and flute exchange, as the violins provided the driving melody. A swaggering drumline tied the piece together throughout. For the refrain, horns and clarinet joined in harmony with the first chair violin. By the second loop, the entire band was in full swing, providing a sharp counterpoint to the lonely, otherworldly introduction. The piece was, for lack of a better word, fun. It was playful and bouncy, almost as if it were a statement of defiance against the introspective melancholy of the previous pieces.

Even Roth seemed to relish the moment of relief, turning to the cheering crowd to announce, “We did play The Moon theme! By Hiroshige Tonomura, from Ducktales. As my great uncle signed every letter: ‘Need I say more?'”

The performance continued, much to audience delight, with a somber rendition of It’s Raining Somewhere Else from Undertale and an almost jazzy take on the music from Teenage Mutant Ninja Turtles as heard on the Nintendo Entertainment System.

These were followed by A Sign of Hope from cult classic RPG Lost Odyssey. The arrangement, which was done by Shiro Hamaguchi, was equal parts sentimental and sad, with an undercurrent of hope that seemed to run through the piece. The pianist’s playing was delicate and beautiful, with each stroke of the key adding another layer to the story of loss and regret that mirrored that of Lost Odyssey protagonist Kaim.

From there, the performance shifted from somber to spooky, as the band struck up a rendition of Pokemon’s Lavender Town theme, which Roth had arranged for his seven-year-old son. Clarinets took the lead for the piece, providing a surprisingly effective change from the original’s infamous synth wails. Still, a duet of plucked violins and quiet drums lent a similar eeriness to the piece, while bass and cello gave it a dirge-like quality. It was unsettling and creepy in ways that were different from the tune that terrified children in 1998 while keeping its spirit alive and well. 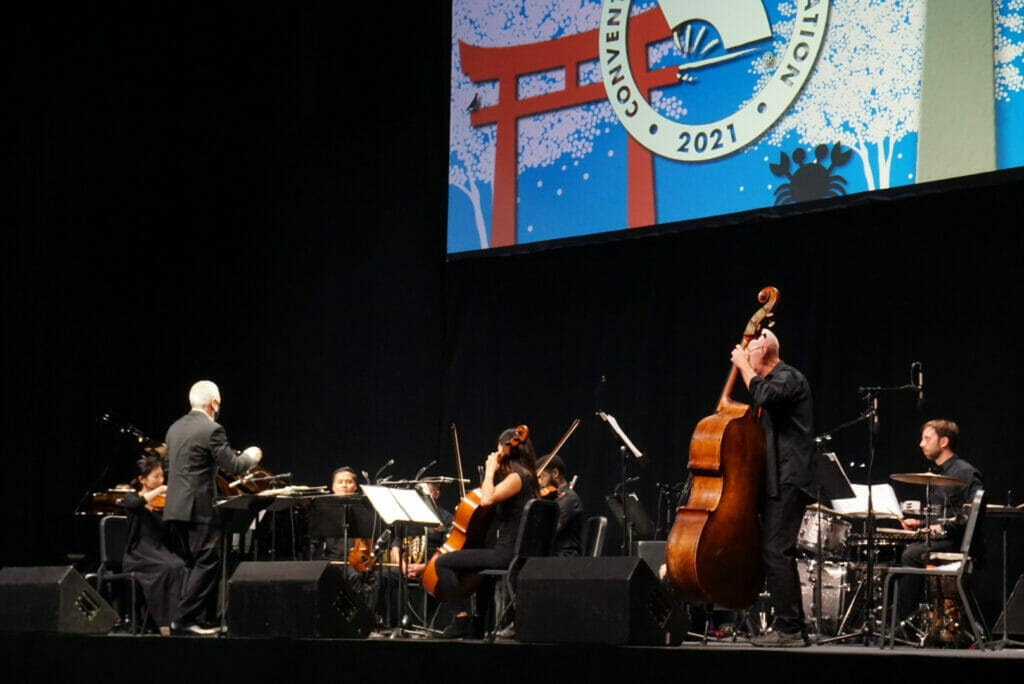 The pace accelerated in delightful contrast,  as the ensemble played a bright and jazzy version of Mario Kart 64’s Rainbow Road theme. This segued into a driving, piano-centric version of the main theme from Assassin’s Creed Rogue, followed by a breezy medley of tunes from perpetual fan-favorite, The Legend of Zelda: Ocarina of Time.

The show reached its zenith with a rendition of Undertale’s Undertale. The arrangement began with plucked violins and cellos, but they weren’t alone for long. One by one, Roth cued the other musicians in, creating a complex dialogue between sections as we bobbed along.   The piano proved to be the true driver of the piece, delivering an increasingly complicated melody to join the rest. When phases changed, so too did the lead instrument. Piano gave way to flute, and after a sorrowful solo, it was joined by the rest of the band for a musical conclusion that seemed as welcoming as it was haunting. The closing, a direct mirror of the beginning, got me ‘right here.’

By this point, time was running out, and the audience could sense it. We grew quiet as Roth addressed us one last time. “Thank you, so much, for coming to the concert tonight,” he began. “It is my honor and privilege to perform for you. Seriously! Thank you so much! To our great friends at Otakon for hosting us, thank you so much. We are so very grateful and happy to be here with such great friends. I came home from performing A New World: Intimate FF in Melbourne, Australia at the end of 2020. This has been my first public concert since then. Thank you for sharing it with me! So, I don’t know if I said it like 6 more times earlier in this program, but I appreciate you so much. Thank you.“

The audience erupted in cheers as he turned to cue the final piece. And for the place of honor? A penultimate medley of pieces from Halo, starting with the main theme. The arrangement was lively, moody, and fascinating, playing like a corridor that led us from one musical vista to another.  Not a seat was filled as the crowd erupted into a jubilant standing ovation. Roth and the musicians took another bow. “You’re here, you’re beautiful, you showed me all kinds of love!”

Fully alive now,  the audience took their seats once more, and Roth delivered on its demand for an encore: a playful, brassy rendition of Sonic the Hedgehog’s Marble Zone theme.  The audience rose to another ovation as Roth and the band exited the stage, as further cries of “Encore! Encore!” echoed through the chamber. We didn’t want it to be over.

The entire atmosphere had changed that evening, from a sense of subdued “off-ness”  to one of joy. It was a truly remarkable experience and one that will not be forgotten quickly. As the doors opened and the crowd began filtering back into the corridors, it was clear that Roth had delivered on his reputation for showing audiences a great time. Without discounting the skill of visibly jubilant musicians, his contagious energy infected us all, and through OPENWORLD we were able to experience a moment of collective happiness—the first for us since lockdown.

OPENWORLD is the brainchild of composer Eric Roth, whose work on “A New World: Intimate Music from Final Fantasy” has delighted fans worldwide since 2014. 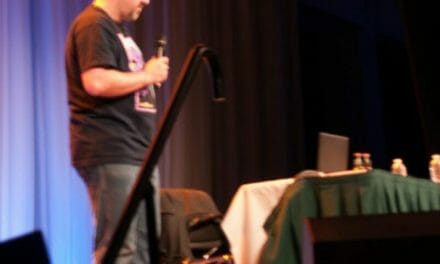 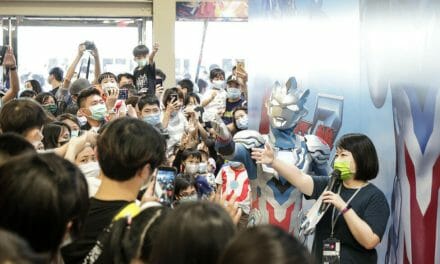