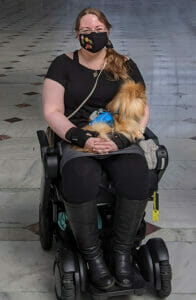 Lydia Rivers is an editor-at-large for Anime Herald. She’s intimate with the horizons forming where the bizarre meets the mundane, but she’s about as responsible a tour guide of that place as the Cheshire Cat. She really tries for you though. As a journalist, her interests include working with international writers, human interest/ethnographic features, and analyzing where a story takes us — and how it accomplishes the trip.

Lydia became interested in Japanese media as a teenager, when she watched Robotech (and later Pokémon) while getting ready for school. She wandered away from anime for a while to pursue her version of “adulting or something,” but soon the rapidly growing convenience of streaming obliterated any pretenses that she outgrew the fandom.

Lydia’s hobbies include teaching people about assistance animals, playing PC and tabletop games, and reading. She also enjoys defending her title “Monarch of Metaphors,” no matter how severely editors punish her.