Do You Love Your Mom and Her Two-Hit Multi-Target Attacks? Volume 3

The fates have decided that we return to the world of swords, sorcery, and multi-targeting moms. The third volume of Do You Love Your Mom and Her Two-Hit Multi-Target Attacks? hit North American retailers just as the anime adaptation hit the airwaves in Japan. Frankly, if you’ve been reading along to this point, then you’re likely unsurprised by the anime’s events. I did have to chuckle at the show’s choice of “Okaa-san Online” as its short title, but I digress.

Much like the previous volume, Do You Love Your Mom and Her Two-Hit Multi-Target Attacks?’ third entry opens with a progress report. This time around, though, the entry was written by Mamako, who offers her own perspective on the story thus far. As one would expect, she’s still   a well-meaning, if doting mother who only wants the best for her son, Masato. 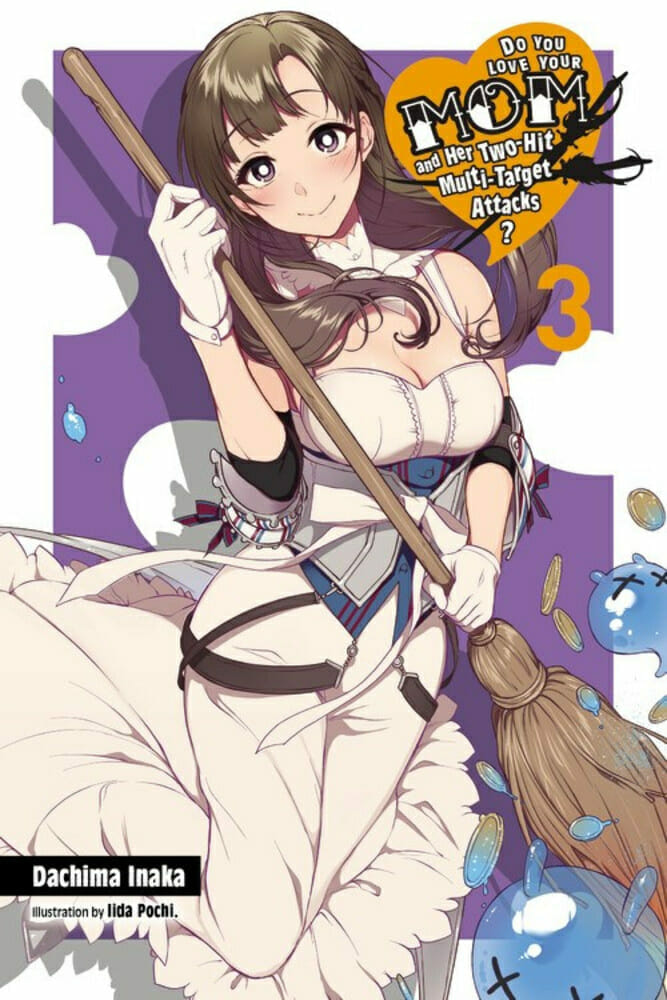 The adventure proper starts off much like it did in the second volume: with the crew engaged in battle. Thanks to Mamako’s ability to effortlessly lay waste to her opponents, though, the party must make do… especially the new member (and support mage) Medhi.

As luck would have it, a new Tower Dungeon is up for exploration near the coastal town of Thermos, which offers the prospect of granting its conqueror a single wish. When Masato and company make their way to the town, they discover that all the others adventurer children who’ve made the journey have missing, leaving the village mothers worried and concerned. To make things worse, Amante, a Fencer class player and one of the “Four Heavenly Kings” of the Libre Alliance began a rebellion against all mothers. Suffice to say, Masato, Mamako and party are sure to have their hands full.

Personally, I appreciate that the series is able to veer away from the rigid narrative flow that’s defined the first two installments.  Rather than deal with mothers who have issues, we get a portrait of a rebellious young woman who clearly has some beef with parents. The reason for her behaviour is unclear at this point, outside of a few vague lines of dialogue.. Personally, I’m looking forward to see who the other thee Heavenly Kings are, as this could be the seeds for an exciting extended arc..

Moreover, I do like how, in spite of Mamako being overpowered, Masato and his party members have begun to develop an enjoyable group dynamic that becomes especially apparent through the characters’ banter.  It feels just as much like a party in an MMO as it does a loose “family” group.

That said, the story still has its bedbugs. Though the cringey mother fanservice has been greatly dialed back from previous volumes, it’s still there below the surface. And, as with past installments, the overall fanservice aspects tend to be weak and uninspired.

In the afterword of this volume,  series author Dachima Inaka makes a brief statement about the story. In his own words, he states that  “[t]his series is not intended to turn mothers into a laughingstock.” He adds that intended for the story to be a parody of the isekai genre, with humor derived in part from exaggerated behaviors of the typical mom. Of course, the thing about good satire is that there’s usually a point to be made about the subject at hand. Throughout this series, though, the writing generally fails to diverge from its bread-and-butter that pokes fun at an over-doting mother who’s seen as invading the typical isekai main character’s grand adventure. It doesn’t do a thing to really comment on the greater topic in a meaningful way, nor does it do anything to further discourse on isekai as a whole.

Still, that’s not to say there’s nothing to enjoy. The next volume kicks off the Casino storyline, which hits stores next month. Perhaps, if we’re lucky, we’ll finally meet Porta’s mom and find out what is their deal with her mother by then…