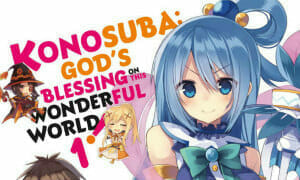 Well, well… this will be a first for me. I remember covering some manga-one shots back when I first started blogging, but I haven’t gotten the chance to cover any books recently. Of course, over the past few years, we have experienced a light novel explosion here in the United States . It’s thanks to companies like Yen Press and the like that we can now enjoy light novels that form the basis of many of the recent anime sensations. When my editor gave me the option to pick up the first volume of a light novel series, I picked Konosuba: God’s Blessing on This Wonderful World! (Konosuba, henceforth). I am a big fan of the franchise, and really enjoyed watching the anime when it aired in Winter 2016 and 2017 seasons.

Konosuba tells the story of Kazuma Satou, our MMC (Male Main Character™), a resident NEET guy who ends up dying at a young age, at an unexpected time. In the afterlife, he meets Aqua, a smug and selfish goddess who offers Kazuma two choices: Be reborn as a new person in his world, or be sent to a fantasy world. Kazuma, being the NEET otaku that he is, not only picks Option 2, but also somehow gets  Aqua to come with him, whether she wants to or not. Together, they set out on a truly funny adventure.

The first Volume covers the first four chapters of the light novel’s story, following Kazuma and Aqua’s adventures in a fantasy world. Yes, Konosuba is another entry in the overstuffed isekai (literally “Different World”) genre, where a main character finds themself in another world.

Granted, this isn’t a recent genre phenomenon. I’m looking at you, El Hazard, Escaflowne, Fushigi Yugi… or, God help you, Maze the Megaburst Space or Garzey’s Wing. Anyway, with the current light novel boom we are in, isekai tends to be the big subgenre that authors tend to flock to  Not only is the format accessible for new audiences, it also gives a generally higher chance of broader-reaching success (read: “getting an anime adaptation”).

But, as one would expect, popularity brings saturation.

Series author Natsume Akatsuki made this genre their own, by adding in quirkiness and twists to the character work. Granted, the story operates on the standard fantasy MMORPG tropes and rules, but the character work is something else entirely. Kazuma initially comes across as a standard isekai lead, but he really is quite conceited (and a bit full of himself). Despite his shortcomings, though, he does manage to be a hero in his own special way… likely due to his LUCK stat. Likewise, Aqua initially appears to be  an aloof goddess. This quickly falls apart when she is revealed as a crybaby who’s totally useless in the setting, despite earning a higher level class then Kazuma on the outset. Pretty much the entire major cast, from Megumin to Darkness, to  Wiz for example are given a similarly subversive angle. They take the generic fantasy class types, and morph them into something quite hilarious and twisted.

This playful, somewhat twisted bent can also be seen in the rest of the writing, especially with regards to plot and character interactions. The story is conveyed through a series of vignettes, which generally flow neatly from one to the next, and the dialogue is peppered with delightfully witty banter (something that I’m glad to see carried over to the anime). The humor serves the brilliant character interactions well, blending black humor with a slightly mischievous stream. I have to admit that this writer got more than a few chuckles from the title. KonoSuba! is one of the few examples in media that I know of, where the “Idiot Plot” device works as intended… mainly because Kazuma and his party are a gaggle of adorkable morons.

That in itself is part of the charm, though: watching these losers stumbling their way through quests, or dealing with an evil Dullahan general. It subverts expectations with reckless abandon, using these reader suppositions as another agent of its humor. Two examples come to mind:

If I could have one complaint, though, it would have to be in the overall writing style. Konosuba! has scads of clunky, descriptive bits that feel like they could be byproducts of the translation process.

Konosuba! Light Novel Volume 1 is a  quick and fun read. It’s always a treat to look at anime’s source material, and this, for the most part carries over a lot about what I enjoyed about this story; namely the ability to take a tired, overblown story type and breath new life into it through subversive comedy. I highly recommend this to fans of the anime series, and I look forward to picking up the rest of the series.