Review: Do You Love Your Mom and Her Two-Hit Multi-Target Attacks? Light Novel Volume 4 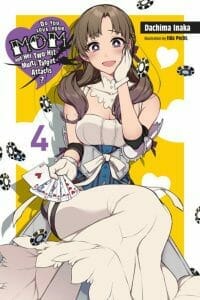 With the Do You Love Your Mom and Her Two-Hit Multi-Target Attacks? Anime wrapping up after the events of the third novel, this fourth volume offers the first real chance for fans who hopped on with the TV series to explore events that haven’t yet been adapted. To date, I have enjoyed the light novels, despite a few of the series’ more problematic issues with regards to fanservice, as well as its inability to fully get the concepts of parody and satire. Still, there’s a chance that this volume will take steps to improve on these shortcomings.

After the now-expected introduction, this new book opens with Masato. In bed, with his mother…..

You read that right.

By this point, the scene is treated as a running gag. Still, it made me roll my eyes considerably all the same. Granted, the appeal of the title is its momcon antics, but the ham-handed way this was handled was more off-putting than alluring.

Anyway, after the defeat of Amante in the previous volume, the party was granted a reward, and told by Shirase to go on to defeat the next member of the Heavenly Kings of the Libre Alliance. With their new orders in hand, Masato and the crew set off toward the aptly named Casino Town. It’s not long after they arrive that the next King, the necromancer Sorella, makes her appearance. Sorella’s basic gimmick is that she speaks in languid tones and smiles sinisterly. She also apparently has some ability to counter Mamako’s overpowered abilities, because plot contrivances are very much a thing.

Basically, this volume continues the now-standard principle of “second verse same as the first,” yet again. Mamako’s overpowered abilities essentially destroy any real narrative tension, which makes it blindingly obvious as to what will go down over the course of the book. The plot follows the same major beats as the last volume’s, albeit with a new boss and locale. And, much like a cheesy RPG, the entire experience feels like a late-game dungeon. While the decor may feel different at first, it takes little time to realize that the entire thing is just a palette-swapped reskin of a previous area  It’s all just surface gimmicks, which do nothing to further development beyond their initial flash of excitement, much like a lot of other “by the numbers” isekai stories.

Because the series refuses to do more than wallow in its own cringe, I will not be forcing myself through another volume. At first, I was intrigued by the premise, and the actual story showed some promise early on. Now, though, the entire experience just seems tiresome to read, and utterly pedestrian in its execution. It fails to understand how satire, much less parody works, and therefore ends up being just another rote isekai story. The fanservice between Mamako and her son has gone from quirky to creepy, and generally serves to distract from what little plot remains. The few positive parts have been crowded out by the bad, and I fear that any enjoyment one can derive from the story will soon be snuffed out.