The Art of Castle in the Sky 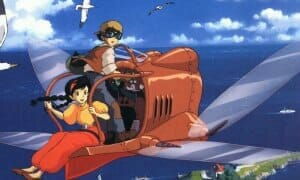 US Publisher: Viz Media
Was this provided by the publisher? Yes 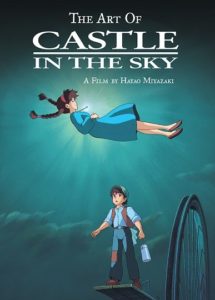 Technically, Laputa: The Castle in the Sky is where Studio Ghibli got its start. Nausicaa of the Valley of Wind predates the formation of Studio Ghibli by just over a year. As it was a success, Tokuma Publishing Co. Ltd. decided to form Ghibli with director Hayao Miyazaki. Miyazaki had also previously directed Lupin III: The Castle of Cagliostro, but at this point, both Nausicaa and Cagliostro are considered part of the Ghibli-Miyazaki canon.

Viz begins The Art of Castle in the Sky with Hayao Miyazaki’s original proposal for the film, referred to as “Pazu”. It’s interesting to see how much of the original vision survived the filmmaking process. His proposal is put opposite the iconic cover image of Pazu discovering Sheeta floating in the air. One line from Miyazaki’s proposal particularly stuck with me, though: “The story is set in an era when machines are still exciting and enjoyable.” I’ll hereby refrain from commenting on Black Mirror.

Osamu Kameyama gives us a the introduction. He details the timeline from March 1984 through the completion of the script. In his introduction, Kameyama provides a fascinating quote from Miyazaki “I’ve long thought I wanted to make an old-school adventure story, but the era we’re in now, it is no longer possible.” Miyazaki was referring to a world that had been fully mapped, with no more true mysteries.

After this, we get right to the art. It begins with a prologue not seen in the film, but rather from the novel serialization. It’s a cool addition. After that, we have everything, from early sketches to finished cels.

On page 36, we get a treatise on animating three different types of transmitted light in the same scene. It’s interesting, but a bit deep if you are just here for the cool imagery. On page 55, the book offers some background on how the crew created the smoke from Pazu’s hut. It’s kind of neat seeing the layering involved. The best part, though, might be page 76 when we learn how Dola came to be.

Page 92 features some background on how the team decided to illuminate etherium. Pages 108 through 111 will tell you everything you ever wanted to know about Flaptors. Page 131 explains how Motoro came to be, despite not being part of Miyazaki’s original vision. Page 143 shares the production method of the hurricane, and incidentally, is one of the most beautiful pages in the book. The final bit of detail on how the film was made comes on page 158, where we learn how the Holography effect was produced.

The book closes with the dub screenplay. Those of you who are truly dedicated could put on a local production of The Castle in the Sky. Or, if that is a bit much, then a local reading could be a lot of fun.

There are three full page background images worthy of note:

Page 170 has a full-page poster for the film. I am kind of tempted to cut it out and frame it, but I’d feel bad about sacrificing the cel images on page 169.

Pages 42-45 give us the design process for Pazu and Sheeta. Pazu’s bag has an amusing history. As for Sheeta, he did a lot of work there “Because in animation, what’s more important than whether a single drawing is good or not is how it moves.”

It’s easy to flip through the book and get lost in the imagery and the story, but it’s worth noting that the entire animation process take a staggering number of hours of work. Getting the imagery from so many cels really is an underrated joy.

At 194 pages, The Art of the Castle in the Sky is a bit shorter than some of the previous Viz releases, such as The Art of Spirited Away, The Art of Howl’s Moving Castle, or my personal favorite, The Art of Porco Rosso. Still, it doesn’t feel like anything has been left out. It was an absolutely wonderful trip down memory lane.