The Art of The Secret World of Arrietty 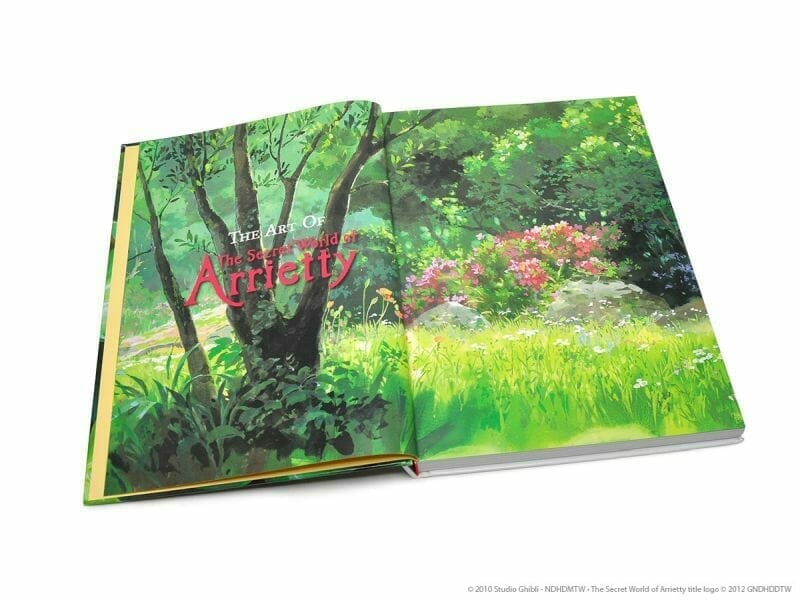 Author: Studio Ghibli
US Publisher: VIZ Media
Was this provided by the publisher? Yes

A page-by-page look through the The Art of the Secret World of Arrietty:

Page 1: Before we get to the table of contents or the introduction, we are greeted with a sketch of a girl sitting on her bed. She’s holding a pencil that almost reaches the ceiling, drawing on a sketchpad that’s a third as big as the bed itself. It’s a strikingly charming introduction to the people we will soon know as “the borrowers”. It’s a concept sketch of an early version of Arrietty Clock. (Editor’s note: Yes, their family name is Clock.)

Pages 2-7: Background sketches of the mansion and the garden.

Pages 8-9: Here, we finally reach the introduction and the backstory about the making of The Secret World of Arrietty. According to the book, Miyazaki had been interested in is turning Mary Norton’s The Borrowers into a film for more than forty years. He wrote the screenplay and choose Hiromasa Yonebayashi as the director (in his debut).

Interesting factoids about the film: there were 996 shots and 74,761 frames of key animation produced to make the film. (Editor’s Note: I highly recommend the entire Borrowers series. It’s an underrated masterpiece.)

Pages 10-34: The Pre-Production concept sketches. Director Hiromasa Yonebayashi shares the art and stories from that time. Two tales in particular stood out to me:

Regarding Miyazaki’s choice of him as director: “I was overseeing Studio Ghibli’s entrance exams for prospective animators at the time and was consumed by the responsibilities of the job. That’s when Miyazaki summoned me and told me I would be directing the next feature. I had never read Mary Norton’s book and believed a director required a particular philosophy and point of view, so I declined. Miyazaki said ‘That’s all in the book!’ and insisted that I read it. But I was so busy with the entrance exams that I couldn’t read it right away. Miyazaki and the producer Toshio Suzuki took turns asking me ‘did you read it’ ‘how far did you get’ so that’s when I finally picked up the book.” -Hiromasa Yonebayashi

I love how Miyazaki didn’t ask Yonebayashi if he wanted to direct the movie. He told him and wouldn’t take “no” for an answer. Making a movie is hard work, and not giving up or backing down is an important skill. Also, in another light this can be viewed as bullying, but perhaps that too is an important skill when you’re trying to get a film made.

In the second story, Yonebayashi shared his thoughts on his new job:

“As a key animator, I’d never been directly involved with the staff who work with colors. In the beginning, it was a thrill just to see the painted artwork.” -Hiromasa Yonebayashi

It’s amazing how compartmentalized the process is. We see the finished product, but the people making it only see what they are directly working on. As for the sketches, we get to see a variety of takes on what was then an unfinished product. Arrietty Clock went through a variety of different looks. I enjoyed page 21 in particular, where we get to see the concept images of the family living together. The sense of scale was something the staff struggled to present, and here we get some of their first takes on it.

Pages 35-43: Hayao Miyazaki provides his thoughts on the story, as well as his concept sketches for The Secret World of Arrietty. You can see his thought process, as he figures out how to portray our world from the perspective of people who are smaller than an apple.

Visions of the domestic life of our borrowers. Note that they had to build their own furniture, such as the chair we see in the lower image of page 38.

Pages 58-67: We see the opening sequence laid out, from the opening shot of the cityscape, to the roads Jessica drives out of the city to the isolated old mansion. In our first sense of perspective, we get Shawn’s view of the grand old tree on pages 64-65. We also see some of Shawn’s initial sketches and Director Yonebayashi’s thoughts on the development of the character throughout the process.

Pages 68-83: Art Director Yoji Takeshige discusses his role, as well as the work of Noboru Yoshida. Takeshige was in charge of the art direction for the human world, while Yoshida was in charge of the world under the floorboards. They wanted a dichotomy of styles. In the human world, we get fuller lines and broad strokes of color. As for the world under the floorboards:

“It was important to clearly render the texture of each and every object as the little people might see them, or else they might not stand out in the background.” -Yoji Takeshige

Here we see some photos of the outside world, sketches of Arrietty, and a series of looks as the vent that plays a major role in the film. This section closes with a sketch of the house under the floorboards.

Pages 84-87: Art Director Noboru Yoshida reflects on his work on Arrietty. He faced numerous challenges, such as conveying the sense of scale for the borrowers. Furthermore, there was a more technical problem he had to solve as well:

“Another challenge had to with the lighting the Clock house. Technically, the house should be completely dark, given that it’s in a brick-walled crawl space, but the Clocks require light to live. But just lighting the house abstractly seemed like a tough sell, so Yonebayashi came up with the system of the fake window and the glass bottle to collect and filter the light into the house. By coming up with this light source and directing light into the house with mirrors and aluminum foil, we were able to incorporate the effects of natural light into the designs.” -Noboru Yoshida

Here, we get a few pictures of Arrietty’s room.

Pages 88-207: The meat of the art book. There are hundreds of images from the film, as well as character sketches for all the major characters in the film. My favorites:

Page 132: There’s something charming about seeing stamps on the wall as art.

We get to see Shawn in various stages of production, but the key here is the quotes from Hiromasa Yonebayashi and Yoji Takeshige. Slow moving characters require a lot of frames of animation to move smoothly, and they have… thoughts on the subject. Takeshige uses the term “Backbreaking”.

Page 152: The entrance to the mansion in the setting sun. If I were to frame an image from the book, this would be it.

Pages 178-179: They weren’t kidding about going for sharp imagery. The bricks in the background are a nice touch.

Page 208: The theatrical poster. It’s also the image from the cover.

Pages 209-242: Here, we have the script. It’s nice to be able to read through it. I should note, though, that unlike some other Ghibli productions, this one is very difficult to bring to life on stage as the differences in scale between the characters is tough to recreate.

Pages 243-245: Finally, we close with the song lyrics. My guess is if your a fan of the film, you’ll already know most of them.

The Art of The Secret World of Arrietty has everything you could want from it. You get the backstory, the script, and concept sketches, and the scenery from the film. The production value of the Viz Media’s Ghibli art books is very high, and I highly recommend them if you want to learn more about the film, or just collect the art from it.