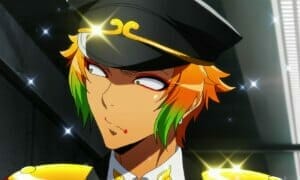 At Anime Boston, we had a chance to sit with Brandon McInnis for a one-on-one interview. In a quiet room off the main stretch, we were able to sit and talk, topic branching from acting and Les Miserables, to software design and Mel Blanc.

Through it all, McInnis was a warm, friendly individual, who showed true passion for his craft, and those closest to him.

Thanks to McInnis for sitting with us, and to Anime Boston for setting up the interview!

Anime Herald: How did you get into acting? I noticed from your profile that you’re a Dallas native, so…

Brandon McInnis: Yeah, so I did a lot of musical theatre in high school. Then I graduated, went to college, studied stuff completely unrelated to acting. (laughs) I majored in Japanese, with a minor in vocal performance. I was pre-med at the same time, it was pretty crazy. Long story short, I did not act for ten years. Like, I was just away from it all. And I lived in Japan for a while, working there, came back, and [ended up] working as a software engineer.

And my brother started studying musical theater at a nearby college. It has a good theater program. And they were doing a production of Les Mis[erables]. And it was an open audition, so anyone could come. My brother called me, and he said “Hey! You should audition for this!” I said “Jonathan, I’m, like, (sighs) I’m a programmer now. I don’t do acting.” And he said, “well that’s too be bad because I already signed you up for an audition slot after mine. And it would be awful if you made a terrible first impression on these people. Because it would ruin any chance of you ever doing it in the future!” “Oh my God, Jonathan, seriously?!”

Okay! So I did it, and got a lead in that, and then started doing more acting in Dallas. And, yeah! That’s how it started back up, ten years later!

Anime Herald: (laughs) I can definitely, as a software engineer, relate to that sentiment.

Brandon McInnis: Oh, are you an engineer as well?

Anime Herald: Out of curiosity, what firm did you come from?

Brandon McInnis: In Japan, I worked for a company called UEI. It was neat.

Anime Herald: Very cool. And through your career, you’ve had a number of high-profile roles, including Finral from Black Clover, Samon Goku from Nanbaka… How does it feel to feel to know that your voice is making an impact on people out in the greater world?

Brandon McInnis: It’s weird! It’s so weird! You know, because as actors, we go into the booth, and we sort of develop these characters, we understand them, we become them, right? And, so the relationship that we have with these characters is very personal!

It’s like our character, it’s part of us. And then, it’s really strange to come to cons, because you don’t understand the impact that it has on people until you come to conventions. We can watch it when it broadcasts on FunimationNow, or whatever. And we see some comments, like “oh, cool, there’s a couple of people watching! That’s great!” But, like, during opening ceremonies, it goes into the clip of Samon. You hear the response, and you’re like “Whoa! People actually know this guy!” It’s very strange, because we feel kind of removed from it until we encounter fans. It’s fun, though!

Anime Herald: You mentioned that your dubbing process involves building the character. What goes into your personal character building process?

Brandon McInnis: That depends on how big the character is, and what we’re doing. Doing voice-over is much different from, say, stage work. Because with stage work, you get the whole script, you analyze the whole thing, you work on it in rehearsal for three to four weeks if you’re lucky. And you it over and over and over again. But with voice-over, you go into the booth, and there are times where you, with the SimulDub process, sometimes you don’t even audition! Sometimes, the directors just know you, and they’re like “I need someone who can do this, and I have two days to get it out, I need someone.” You just get called in. You don’t even know the show! You show up and *they* sort of introduce you to the character of the world.

And it’s a very fast process! You have to just assimilate this character, and learn more about them as time goes on. That’s sort of how that works.

Anime Herald: Kind of have to hit the ground running.

Anime Herald: Out of curiosity, this is more of a random thing. I know that voice actors like to lay little bombs in the scripts.

Anime Herald: So what would be the craziest one you’ve run into?

Brandon McInnis: Oh my gosh! Well, okay. So I can talk about one. I was just put into Cardcaptor Sakura as this character Kaito, that’s a butler. And my boyfriend, J. Michael Tatum, is known for [Black Butler’s] Sebastian. And so, when I went in, Caitlin Glass said “Okay. Here’s what you’re gonna do. You can do an outtake, a bomb, we’ll leave it.” And there’s a line where he’s talking about tea or something, and Akiho or this other is like “Why are you so good at making tea?” And she had me leave a bomb for Michael, saying “well, it’s simply because I’m one hell of a butler!” (laughs) That’s probably my favorite!

Anime Herald: And in the world of voice acting, there’s what’s known as the “Mel Blanc test,” where, basically, an actor portrays one of their characters imitating another of their characters. What are your thoughts on that general line of thinking?

Brandon McInnis: Oh! That’s hard to do, but it’s a great test! It’s a great test of technical skill. You have people like Seth MacFarlane, who do amazing things with their voices! You know, he does that in Fmaily Guy! In shows that he works on. I’ve never actually tried to do that, but I think it’s an amazing skill! If you can do that, it’s pretty good.

Anime Herald: And they say a good actor takes something from everything they do. What would you say has been the biggest takeaway you’ve had from a character you’ve played?

Brandon McInnis: I think, so, Samon Goku in Nanabaka. When I went in for Aaron, the director, he brought me in and said “hey, let me hear your low voice” And I’m like “Okay.” And he worked with it! And what we ended up with, the voice for Samon, was something I had never done with my voice before. I’ve never done a voice (enters his Samon voice) that had this much grit in it, (returns to normal speaking tone) you know?

I think, because that character, Samon comes back multiple times, multiple episodes. You know, he shows up a lot! That really helped me develop part of my voice that I had never really tried to develop before, and it opened up this whole new world of options that I could use for other characters, because of that!

Anime Herald: And, speaking of roles, is there a role that you’d, say, donate a kidney to have? That absolute dream?

Brandon McInnis: Does it have to be anime?

Brandon McInnis: It doesn’t? Okay! So there’s a musical, The Hunchback of Notre Dame, is also a musical now. It’s recent. And I was in the show last year, and played Clopin, the Gypsy King. But I would love to play Quasimodo, because that’s a hard role to do, and it’d be fun.

Anime Herald: Where would you see yourself if you never fell into acting?

Brandon McInnis: I’d still be engineering, obviously. But if I wasn’t doing acting at all, it’d probably be music. Because I produced my own music eight or nine years ago, so I’d probably still be doing that, honestly.

Anime Herald: Especially in the past couple of years, we’ve seen a lot of changes in the way the industry’s changed and done things. What would you say has been the absolute biggest change that you’ve been able to observe through your career?

Brandon McInnis: I think the biggest change, well, it’s twofold. One is there are a lot more opportunities for local actors because of how on-call you have to be. So it’s been wonderful for Dallas-based actors to suddenly have a HUGE body of work that they can contribute to.

Like, I may go and record for a character in the first couple of episodes for a show. And he shows up for five minutes, maybe, or even like ten seconds in one of the first three episodes. And then in the last six episodes, he’s in half of every single one. You don’t know! So you really have to be immensely flexible as an actor.

Brandon McInnis: Ooh! Challenge in a character, definitely. As an actor, voice acting is still acting, and for a challenging voice that’s very technical. But as actors, we always try to strive for realism, to be as natural and realistic as possible for a given character. So even if you have a difficult voice, I would say even in those instances is to be true to the character without being too much in your head about the technical aspect. So I would rather have a challenging character!

Anime Herald: And on a more fun note, say you’re stranded on a desert island. What would be the three items to keep you going until the rescue boat arrives?

Brandon McInnis: (laughs) I’d probably have my boyfriend, and my French Bulldog… and oh, what would my last one be? And a piano! If I could have anything, I’d have a piano, too! (laughs) So I can write some music, you know?

Anime Herald: And is there anything you’d like to say to our readers?

Brandon McInnis: Thank you so much for having me, and being interested! Going to cons is wonderful! If you have a specific voice actor that you want to see at a convention, even if it’s not me… if it’s me then that’s wonderful! Thank you! But reach out to the con closest to you and request them, because that’s how we get to go meet fans. And thank you so much for reading!