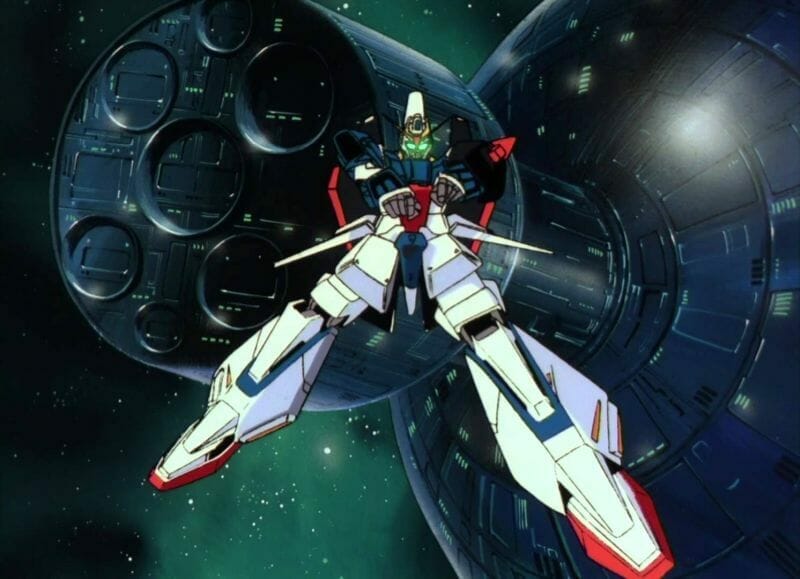 Some highlights from the Yoshiyuki Tomino Press Conference. 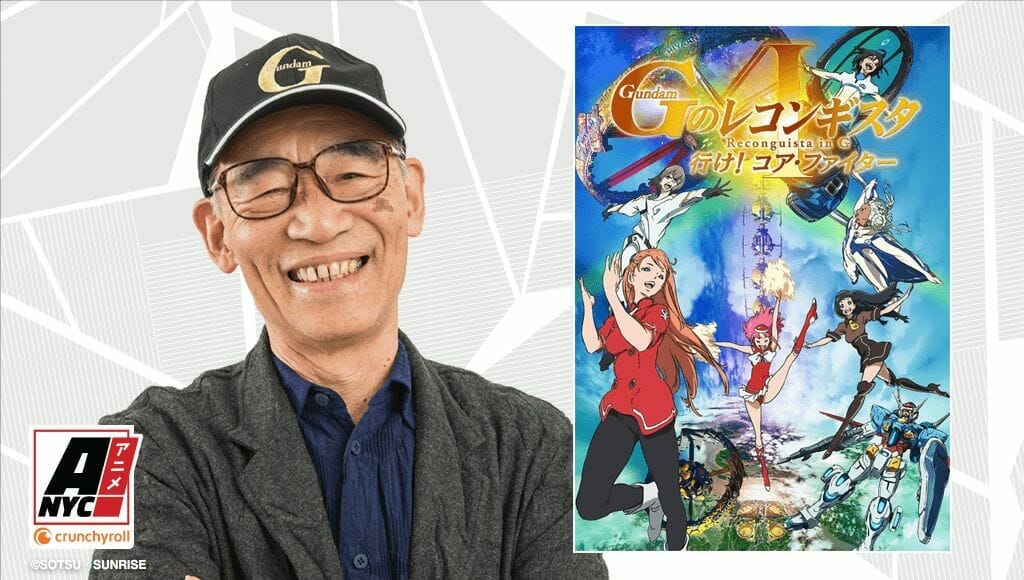 Yoshiyuki Tomino: Do I feel excited? No. Do you want to know what I actually feel? Twenty years too late.

If he had to pilot one Gundam:

Yoshiyuki Tomino: I would never want to pilot a Gundam.

On Gundam becoming popular in American and around the world twenty years ago:

Yoshiyuki Tomino: Nope. Not surprised at all.

I always thought Gundam would hit, whether in Japan or around the world. When it hit in America, I wanted to say to my critics “See, this is what I was talking about.”

On war being horrific, but providing new technology to benefit society:

Yoshiyuki Tomino: I think it’s almost the opposite. I feel like there’s more technology that was invented for useful things in times of peace that was then used in warfare. One example is dynamite. It was invented to make mining more efficient, and then was used on the battlefield.

Even in stories aimed for children I felt that I could not depict a happy ending, because that us not what happens in real life.

When the giant robot genre came into being in Japan it was purely an entertainment medium for kids, even though some of these projects involved war. I had five years in the field and I got tired of it. That resulted in Gundam. I didn’t want to keep making things for kids about war that were purely entertainment.

On the color palette for Gundam:

Yoshiyuki Tomino: The sponsor of the show was a toy company. We had to acquiesce to their demands, which was to use their three primary colors: red, white, and blue. If you think about, in any story set in space, you’d fundamentally only be using white.

The problem is in real life when you to space, everything is white. If you’re making a film, even in live action, how are you going to separate who is a foe and who is an ally when everyone is white? It’s bad cinematography. Look at Star Wars for example. All the ships are almost white, so the way you destinguish who is who is by the shape of the ships. We said “it’s animation, we can stray from realism a bit”, so that’s why we added more color.

On inspiring artists from different cultures:

Yoshiyuki Tomino: When I started the story what I envisioned was “We’ve finally reached the 21st century, why can’t we live in a world with no borders, no discrimination. We don’t think of ourselves as Americans or Japanese or Europeans. We’re all Terrans, we’re all Earth people.”

Yoshiyuki Tomino: I don’t know the nitty gritty details of how that happened. As Councilman Kallos mentioned in his speech, he is a Gundam fan, so maybe that had something to do with it. I had a chance to chat with him afterwords and I came to realize he’s probably seen more Gundam than I have. He also remembers a lot more of it than I do. *Laughs*

On the series moving beyond him:

Yoshiyuki Tomino: Even though I’m the birth parent of Gundam, as some point I’ll need to let go. I too am beholden to the sponsors and the production companies. There’s a certain extent of it that I don’t have any control over.

To clarify, it’s not like I’m angry about this. Whether it’s live action or animation, it’s a business. I’ve gotten to the age where I’ve realized “If they can make a buck off of this, what’s so wrong with that?”

On the message of characters who treat war like a game:

Yoshiyuki Tomino: It’s a bit difficult for me to answer that.

When I watch a movie it’s not that I don’t a battle scene, but I feel that a movie only made out of battle scenes is not worthy or significant.

There have to be people out there, real soldiers and commanders who treat war as a game. Then, to show that in film or animation is just a reflection of that reality. In order to portray such situation, I might have to depict all sides of war, all kinds of war. I should be able to do that also in an anime. That’s what I put into my creative process.

For Gundam as a property, not just as part of the giant robot genre, to be able to make someone feel something about war… I suppose there are cases where you have to depict it as a game. The fact that it is still popular 40 years later means I did it correctly.

Even in Japan, starting around twenty years ago, a lot of fans who say they only learned about war through Gundam.

On what he would change from any of his Gundam series:

Yoshiyuki Tomino: The most recent things I worked on were Char’s Counterattack and Turn A Gundam. In the last few years there have been things where I thought “Ah, maybe I could have done this better”, but what I also realized is that even though I have had times when I wanted to redo certain things about Turn A Gundam, it didn’t come out too bad, so I don’t think I would actually go back and do it over. Same thing with Char’s Counterattack.

In terms of Turn A, if possible at all, I might want to redo the design aspect. Maybe that was too much to ask for the time. Everything came out too crafty or artistic rather than Gundam-esque. I think that aspect I might want to redo, but as I said, I think it came out fine as it is.

On what makes Gundam a universe a place where he can tell stories he can’t tell elsewhere:

Yoshiyuki Tomino: I made Gundam for 30 years, and then I took a break for 10 years. Now I’ve come back to work on Reconguista in G. What made me able to come back is due to one thing and one thing only, the rock behind Gundam, Bandai. The other thing is that I feel like there is a limit to my abilities. Now that I’ve made so much Gundam for so long, I don’t think I have the capacity to create and explore a new universe.

There’s something I just thought of. I’ve worked on something that is such a huge scale. I feel like the sponsors might have a misconception that if they asked to work on something new, it would have such a huge budget that they’d never want to invest in it. *Laughs*

Truth be told I do only work within this large scale world view. If you think about it, you have different designers for the humanoid characters, for the large scale mecha, for the vehicles. They’re all separate staff. I’m thinking to myself “If I were to make a non-Gundam project that still has the same kind of themes and visuals, Sunrise may be the only company left I could work at. If I were to leave Sunrise and work on that kind of project, I’d have nowhere to go.” Unfortunately, I’m that kind of awkward individual.

Anime Herald: From the very beginning Gundam has focused on showing every facet of the war from both sides of the conflict. Why was that so important to you?

I am often quoted or people think I’m “a war-lover.” That’s not true, I don’t love war. It’s just that I was asked to make show about giant robots involving mobile suits. If you think about making a realistic story with real life conditions… you can’t just ask a private individual to make weapons like mobile suits, especially in such quantity that new mechas keep appearing every episode. The only organization that can produce mobile suits in such scale is a national government. How do you create a realistic story about that? You end up with war.

On the growth of social media and how easy it is for fans to reach out to creators:

Yoshiyuki Tomino: You merely speak of current trends. I’m aware of this phenomenon, but I don’t really take it into consideration. I try not to be conscious of fan reaction or market reaction. What I was paying attention to is that we were reaching the limits of the Gundam universe. For me the challenge was how do we transcend that and break through the wall the Gundam universe seems to have reached. That’s how I came to create Reconguista in G. I wanted to go back and make a story for children that involved giant robots.

On our ability to consume Gundam via our phones, either by streaming or playing games:

Yoshiyuki Tomino: All I can say about the present day condition is that I feel like I must be aware of on which level there are the means for viewers to access the programs. I’d be remiss if I didn’t. But, it also reminds me of how important it is to continue to produce good children’s content. I feel like I’m not in a position to give a personal opinion because I’ve benefited from such advances in the media.

On the other hand I feel like I have to say that with the increase in the number of means of communication that there is a responsibility for us to creators to create practical logical common-sense material to upload that’s socially responsible.

If I could add one more thing, when I say “common-sense” it could be taken to mean the opposite stance to populism.