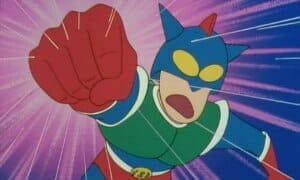 First question from Anime Herald (Seth): “When you were working on Shin Chan how much did you focus on the international audience?”

“Shin Chan is very popular in Europe and I was very aware of that and took that into account. I wasn’t very aware of how it was being distributed in North America. I had heard that it was being aired late at night and people were streaming it.” -Yuji Muto

Anime News Network: “What was your first impression of Shin Chan?”

MC Radio: “How hard was it to take over the series after two directors left the project?”

“Being that it was an established series, a lot of the aesthetics had already been decided. It was good to have that laid out for me. My job was examining what my predecessors hadn’t done yet and filling in those gaps.” -Yuji Muto

Anime Herald (Samantha): “You had previously worked on titles like Haunted Junction and City Hunter. What did your work on these titles brought when you took the director’s chair for Shin Chan?”

“I’m a big fan of comedy anime. When I first took on Shin Chan I felt that it very much fit me so I was able to jump right in and do what I wanted with Shin Chan. There wasn’t so much of a connection with my past works because they were so different thematically.” -Yuji Muto

Anime News Network: “Did your directorial approach fit with Shin Chan when you joined the show, or did you have to modify your style to fit the talent and structure?”

“I had worked with Hara-san on Shin Chan before taking over. I was very familiar with the stylistic choices that Hara-san would do directorially with Shin Chan. Whenever I would approach something I would think about it as ‘if it was Hara-san, this is what he would do’ and then think about it ‘ok, now what should I do’ and then pull it towards my personal stylistic choices.” -Yuji Muto

“There’s Hara-san’s strike zone (Action Bastard draws a strike zone). Then there’s my strike zone (a few inches off from Hara-san’s). I want to keep it inside Hara-san’s zone while also keeping it within my zone. If I go too far from Hara-san’s zone he’ll be upset with me, so (Action Bastard mimics a spot fully inside his zone, and on the edge of Hara-san’s zone). I want to keep it in the sweet spot. There’s things I wouldn’t do to cross that point, but there are areas where I had a lot of freedom to do it my way. This is true for other episode directors as well. They go through the same process. When the episode directors get together, they discuss how far they can go without Hara-san getting mad. That is what leads to the breadth of the work.” -Yuji Muto

MC Radio: “If Shin-Chan was your son, what would you tell him not to do?”

“The things that Shin Chan does are only forgivable as a child. An adult can’t just pull his ass out, but maybe you can if you’re a kid.” -Yuji Muto

“I have a daughter and I try to give her a lot of room to grow, but thankfully she’s not taking her ass out in front of people. I try to let her be as a child.” -Yuji Muto

“As a fundamental characteristic of Shin Chan, there’s a lot of things that he says that he doesn’t fully understand what he’s saying. That’s reflective of the fact that adults need to be more concerned about their influence on the kids, and not as much what the kids are saying. The way Shin Chan reacts to things are a mirror image of what the adults have been doing to him.” -Yuji Muto

Anime Herald (Seth): “You’ve discussed how Shin Chan is a younger version of yourself. Do you now empathize with his salaryman father?”

“My own father was also a salaryman. He was a hands off father and let me be very free, which is why I was able to enter this field of work (laughs). -Yuji Muto

Anime News Network: “What’s your favorite type of Shin Chan story to adapt? Are there any you dread adapting?”

“There’s a mini-series within Crayon Shin Chan called ‘The rabbit who gets punched’. That’s one where we have to be really careful with the lines that we push because if we go to far it can become way too scary and cause an uproar. Personally I’m not a big fan of horror, but when I started this mini-series people who are horror fans started coming up to me and asking me “Hey, you really like horror don’t you?” and I’m like ‘It’s kind of scary, I’m not really that into it.” (Makes a scared face) -Yuji Muto

“Even at the point when I’m storyboarding that mini-series I’ll do something scary and then go ‘ooh that was scary’ and then set it aside and not look at it again.” -Yuji Muto

MC Radio: “What are your thoughts about Shin Chan’s popularity in Spain?”

“That’s because Spanish people are so passionate about exposing their bottoms.” -Yuji Muto

“In all seriousness, I feel like the passion of the Spanish people allows them to sympathize and empathize with Shin Chan.” -Yuji Muto

“I was able to go to Spain last year in January and there was similar turn out to here and they were very nice to me. They treated me really well.”  -Yuji Muto

“Two days after I get back from Anime Boston I’ll head out to Madrid. I feel like it will be a similar situation to here.” -Yuji Muto

Anime Herald (Samantha): “Have you brought any aspects of your daughter into Shin Chan?”

“There’s been an instance where I used a conversation with my daughter on Shin-Chan. Later I was watching the show with her and that scene came on. She was like ‘Hey wait, what’s this? Isn’t that a conversation we just had?’ It was exactly that conversation, verbatim.” -Yuji Muto

“We also feature things that happen in my household in Crayon Shin-Chan. There was an episode where there was a box where you couldn’t see what was inside. The episode was about trying to open the box without it being found out that the box was opened. The only thing in the box was a piece of paper with ‘Sushi’ written on it. That actually happened in my house. Afterwards we went out and ate sushi. The backstory was exactly what you would expect.” -Yuji Muto

Anime News Network: “What was your favorite episode to direct?”

“I like Nagurare Usagi a lot. The theatrical releases for sure. In the theatrical release of ‘Crayon Shin-chan: The Legend Called: Dance! Amigo!’ it’s very horror-centric. There’s a lot of homage to SFX and horrific things that I witnessed in movies as a child.” -Yuji Muto

“I’m not really a big fan of horror, but it seems that I like to make horrific things sometimes though, so working on the horror episodes.” -Yuji Muto

MC Radio: The series has been dubbed into 29-30 languages. Have you been able to watch it in languages other than English in Japanese?”

“In Spain I was able to watch it in Spanish. The voice actors doing the overdubs came to meet me. I was elated to meet them.”

Special thanks to Yuji Muto for speaking with us. Thanks to Anime Boston for making this interview possible.