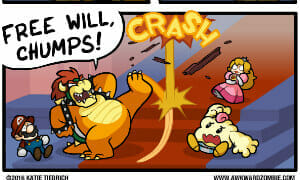 I’m not sure when video game fan-fiction began. Fans creating video games is actually rather old.

We get to meet various characters, but I don’t think Matt of Matt’s General Store inspired any steamy romance stories.

John Kemeny created software language BASIC while at Dartmouth in 1964. His goal was to bring the ability to create software to the masses. That led to this legendary tome, BASIC Computer Games, being published in 1973: 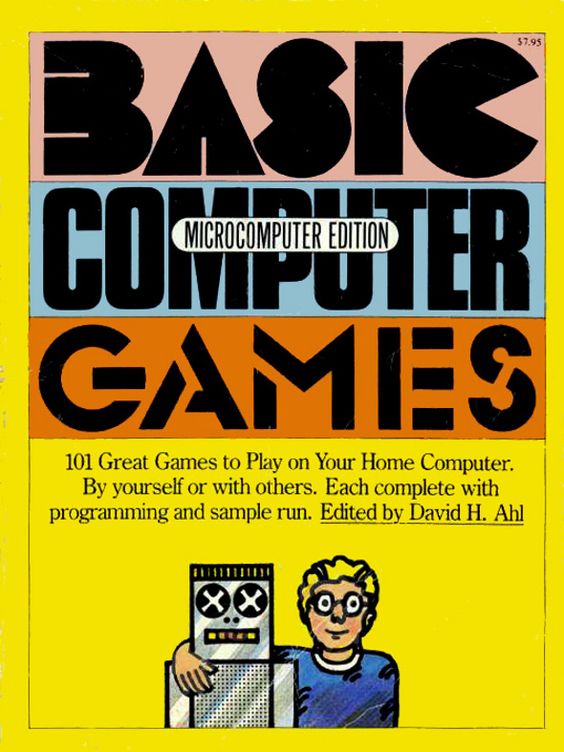 The PDF is available online if you wish to check it out. The history of video games is a little fuzzy, but it appears the first named character in a video game for whom fan-fiction was written is none other than Mr. Spock.

Alas, any fan fiction based on Spock is almost certainly inspired by the Star Trek TV show. The 1977 release of Atari’s Video Computer System brought video games to the masses. Pac-Man probably had stories written about him (especially after his wife showed up in 1982). History is clear on the character that brought fan fiction into the fore and made it mainstream, though: 1981’s Jump Man. 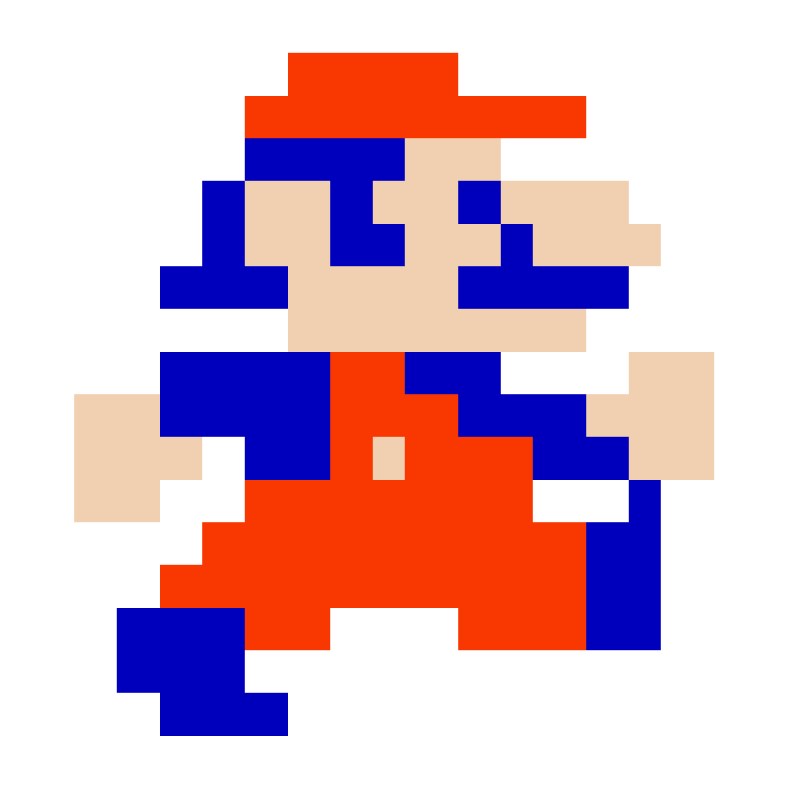 Yep. One of the most recognizable images in the world. You might know him by another name. Well, there is a funny story behind that. Nintendo of America had fallen behind in their rent payments. Their landlord, Mario Segale, eventually got fed up and came to them with a demand for the unpaid rent. Nintendo of America’s President Minoru Arakawa, who had obviously read The Hitchhiker’s Guide to the Galaxy, didn’t panic. Some of you might remember how Ford Prefect paid one of his more epic bar tabs. In a similar move, Jump Man became Mario and a star was born.

Fast forward to 2005. Captain N: The Game Master has been off the air for almost fifteen years. Furthermore, we haven’t been able to peek into the lives of our favorite Nintendo characters in over a decade. Finally, one woman has had enough. She is determined to peel back the veil and show the world what these icons are really like when the television is off. That woman is Katie Tiedrich. This is the story of Awkward Zombie.

Katie’s father drew comics for his daughter. He inspired her to create art and humor. She’d been drawing different comics for years, when she decided to focus on her favorite video game characters. If you’ve played through any of the Zelda games, you may have noticed that Link doesn’t talk very much. Katie had the freedom to fill in the blanks, and she took it.

Nintendo has confirmed this is now canon, and we’ll see some of the effects of this marriage in Breath of the Wild. A few years ago, Tietrich decided to release of collection of her first stories. She took to Kickstarter and asked for $8,500, which would cover the costs of printing and mailing the books. She got… more.

That’s over ten times what she asked for. She was stunned at the response. It was a massive success, dwarfed only by the amount of work she had to do to fulfill all of her obligations. She told me that she has material for five more books, and is thinking of doing a second Kickstarter sometime in 2017. I am sure the fans would appreciate that.

When we play video games, we often don’t think about the times where the games don’t really make sense. Katie, a mechanical engineer who now works making parts for a subsidiary of NASA, finds these moments incredibly goofy. When we see the stories laid out in comic form, the cognitive dissonance becomes apparent. This is one of my favorite panels of all time:

Who knew that Bowser was such a philosopher? He’s right, too. It was a fatalistic point of view, and self-contradictory to boot! You might note our hero Jump Man appears, but does not speak. Katie has lamented her inability to draw Mario. Personally, I think she captures the essence of the man and the mustache, but it is common for artists to have a grander vision in their head that they are unable to manifest on the canvas.

Bowser isn’t the only antagonist of the series to get a chance to share their thoughts. Here, we see a Goomba forced to live with the consequences of Mario’s actions: 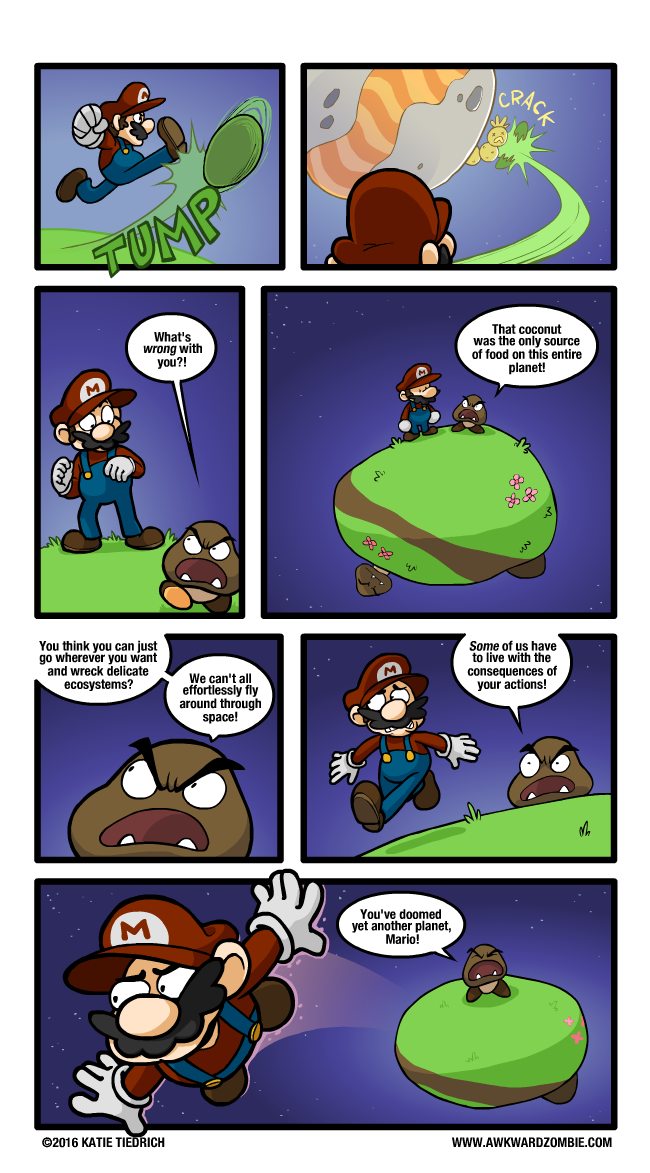 We so rarely think about the survivors who are forced to pick up the pieces after the hero has moved on. For the record, Pac Man has also appeared in her works. I’m not sure how much we learn about his personality: 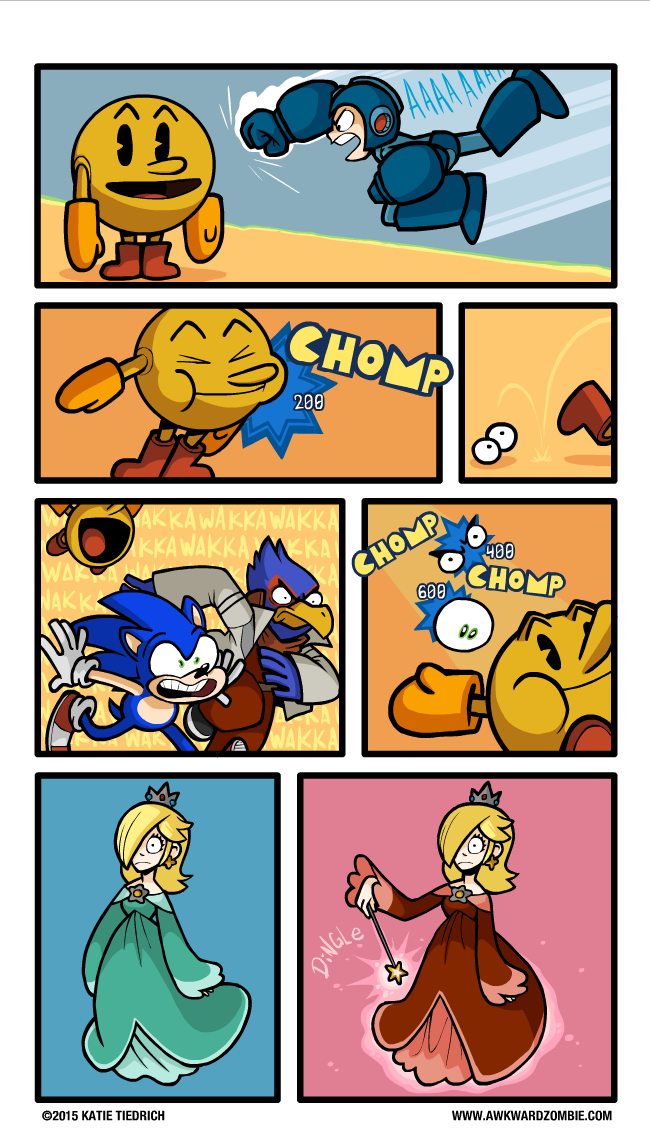 Rosalina decided to play it safe.

I asked Katie if she had anything she’d like to say to her audience. She went with an old classic: “Hello”. She added that loves drawing and that she’ll keep going until her hands fall off.

You can check out her current work at http://awkwardzombie.com/

P.S. She was raised in Hastings-on-Hudson, which means she’s a fellow Westchesterian.