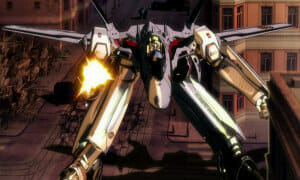 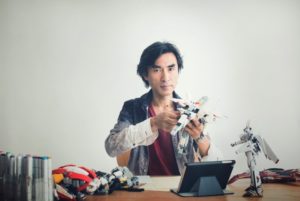 Imagine, if you will, that you are a young man fascinated with space. You dream of designing the machines that will carry humanity to the stars and beyond. You are majoring in engineering, and your official career plan is to be a space tech. Actually, let’s step a little further back in time…

You are in grade nine. A friend of yours made an appointment to visit one of your favorite animation studios. When you arrive, you expect to see a large, modern office. Instead, you are led into a very small room with a heavily cluttered desk. Amazingly, the desk is less crowded than the area below it, where four men are crammed into the tight space, sleeping.

Flash forward to university. You are a young man, struggling under the huge workload that is required to earn an engineering degree. Your father was an engineer and you feel you have those skills, but you have already found work designing toys for Takara-Tomy and ships for Satelight Inc.

Eric Jaffe noted that university students in the hard sciences (often referred to as STEM) are a bit like the penguins of South Africa’s Dyer Island. They need to leave the island to find food, but the waters off the island are infested with sharks. As a result, every few days there are slightly fewer penguins living on the island. Similarly, professors are used to their class size shrinking a bit as the semester wears on. Year after year, the attrition takes its toll.

Kawamori is haunted. Sometimes, he dreams of helping launch men into space. Sometimes, he wonders what the fourth guy to crawl under the desk was thinking. Or, maybe, that fourth guy was just too tired to think. Maybe he just wanted nothing more than a few moments’ respite from the crushing engineering homework he…

Kawamori awakes with a start.[1]  He knows now what he must do. He drops out of Keio University in his third year. He earns his first design credit as the mechanical designer on Ultraman in 1979, and his career is launched. 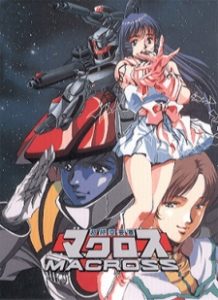 Three years later, Kawamori is at Studio Nue, where he works with Kazutaka Miyataki and Haruhiko Mikimoto to create The Super Dimensional Fortress Macross. They do not expect Macross to last 30+ years.

Side note: Kawamori and Mikimoto were friends who both attended Keio University. While at university, Mikimoto joined the recently formed Artland Inc. Despite this, he ended up graduating.

Second side note: Hiroshi Ōnogi, who worked as a writer on Macross, attended Keio University at the same time as both Kawamori and Mikimoto. All three have gone on to enjoy productive careers in the anime industry.

Kawamori had grown up a fan of Lupin III (the first series) and Space Battleship Yamato. He explained to me that the success of Macross is the biggest surprise of his career as, amazingly, both Macross and Lupin III have managed to stay ssrelevant decades later. He admitted that he doesn’t have much time to watch anime these days, but he tries to catch most of the Pixar films. He said he liked the first Cars movie and Toy Story 3.

One surprising thing Kawamori said was that, over all his years working in the industry, his role hasn’t changed. He has received writing, animation, and production credits. At heart, though, his role is that of a designer.

“Even directors get theirs hands dirty.” -Shoji Kawamori 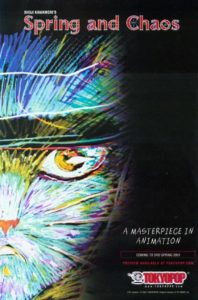 Kawamori noted that he can’t work without sleep, so he takes care to pace himself. I asked about his favorite project, to which he replied “Every project is my favorite project when I work on it.” When pressed, he just smiled and said “Spring and Chaos.” He explained that it was a project he had pure freedom to work on, with no limitations.

As we were out in California when I interviewed him, we had a chance to talk about American anime fans. Kawamori remarked that American fans enjoy anime much more freely. He confessed that he didn’t know what to expect from American fans, and was never sure as to what they were going to like. He was gratified they had found so much joy in his work.

During our interview, the only time I detected a hint of surprise on Kawamori’s face came about when I asked if he enjoyed working with Gundam models. He replied that he prefers to design his own models from scratch, and enjoyed making paper models.

As we were finishing up, Kawamori  remarked that he was quite lucky to work with so many talented people during his career. In addition to Miyataki and Mikimoto, he was glad to have worked with composer Miko Kanno on so many projects.

Speaking of projects (maybe my worst transition ever, but I’m running with it), Kawamori is working on a new one with Satelight Inc. Sadly, he wasn’t able to give out many details. We do know the project is about the definition of humanity in a world with advanced artificial intelligence. We don’t have a release date, but I was told to expect it before the end of 2018.

It was a pleasure talking with Kawamori and, on behalf of Anime Herald, I’d like to wish him and Satelight best of luck on the new anime.

[1] I may have taken a bit of poetic license here, but the story about the appointment, the small office, and the four guys sleeping under the desk are all straight from Kawamori. His university and career arcs are well recorded, as is his design work.