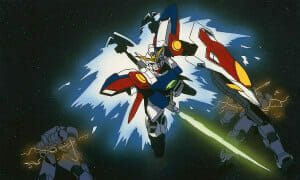 Sunrise Producer Hideyuki Tomioka famously got his start in the industry as a part-time driver/gofer. I had to ask about how he managed to rise from those humble beginnings to become a head producer:

“I first entered Sunrise 37 years ago. Sunrise had already given me the title of ‘production assistant’. My job was collecting things from creators. Sunrise had outsourced much of their animation to Taiwan. People hated working on robot anime. Sunrise brought in many animators from Taiwan. My family was managing an apartment complex where some of the animators stayed.” -Hideyuki Tomioka

“I was given a three-month gig at first. I was a cocky kid. I said I could produce better work than they were currently doing. They gave me a chance. I stayed later and later to get it right. Now it is 37 years later.” -Hideyuki Tomioka

When getting it right means getting it perfect, it can take a great deal of time indeed. More on this in a bit. His next question was about how involved he was in the various Gundam productions:

“I was equally involved in each one. Originally, Sunrise wouldn’t give me top or solo billing even though I was doing the work. For the OVAs and films, Bandai was producing the merch.” -Hideyuki Tomioka

I asked about his work on Steamboy:

“There were a group of films I was asked to work on, including Metropolis, Garm Wars: The Last Druid, and Steamboy. Steamboy had already been in production for four years with no footage. ¥500,000,000 [$4,656,284.70 USD] had already been spent on the production. Bandai reached out to Sunrise. I was the #1 producer at the time. The president came to me and said I could turn them down if I didn’t want to pick up the project, but I was confident.” -Hideyuki Tomioka

“I’m still disappointed it was wasn’t a bigger hit. It had such top notch animation. I was hoping to wrap it in three years. It ended up taking four. We spent 1.5 billion yen [$13,969,500 USD] on it.” -Hideyuki Tomioka  (Editor’s note: The animation really is brilliant. Watch the director’s cut if you have an opportunity)

“I was producing Inuyasha, plus one or two other series at the time. [Katsuhiro] Otomo-san is brilliant, but he can be stubborn. He’s tough to work with, but he does a great job.” -Hideyuki Tomioka

Back to the cost:

“ADR (automated dubbing replacement) and sound mixing made it expensive. We did that in the US.” -Hideyuki Tomioka

All told, Steamboy cost about 2.4 billion yen ($22,351,200 USD) to produce. As for Metropolis, it was a Madhouse project and it turned out to be a masterpiece. Garm Wars: The Last Druid was a bit trickier, as Mamoru Oshii apparently went away during the project. It also had to be finished with computer graphic animation. That can be a bit awkward. However, and I cannot stress this enough: Getting a project to the finish line is always a major accomplishment. Some will succeed. Some will disappoint. But you only have a chance if you get it out the door, which is the essence of a producer’s job.

The next question was about Gundam:

“We changed Gundam history. In the beginning, only the original director (Yoshiyuki Tomino) handled them. Gundam Wing and Mobile Fighter G Gundam were so different, [with] new Mobile Suits duking it out.”

There was a reason for that:

“Bandai gave us one instruction: ‘We want at least five new Mobile Suits. So long as they sell, we are happy.’” -Hideyuki Tomioka

“That’s all they requested. We picked our best director and best writer. Afterwards our president said ‘Good job. Now we can make more Gundam. (Tomioka smiled wryly) I helped create the longevity of the Gundam series.” -Hideyuki Tomioka

I need to put this in perspective. Check out the interview he and Katsuyuki Sumizawa gave at Otakon 2017. Key excepts:

“Sumizawa’s reaction to being asked to pen Gundam Wing was one of disbelief. “Mr. Tomioka, you said you didn’t want to do a Gundam series, so why are you doing one now?” he recalled. Sumizawa also noted how exhausted the G Gundam staff appeared around the offices. “They were all kind of somber and tired all the time. I was like, Gundam series are not meant to be made by humans.”

“Production was so challenging, Tomioka aired his concerns to Sunrise execs. “It was such hell,” said Tomioka, that he told the CEO, “‘Please, just fire me’…I really thought I was going to die.” However, Tomioka wasn’t going to get away from it that easily.”

“It’s a piece of cake to fire a director, but there’s no precedent for firing a producer, so you have to stick it out, man,” responded the CEO. It comes perhaps as no surprise that Tomioka’s happiest moment during production was the feeling of overwhelming relief once it was over.”

Read these quotes before you’re certain you want to pursue a career in anime. Let’s go back to the part about firing directors:

“I have nothing bad to say about [Masashi] Ikeda-san. However, he would keep trying to perfect his storyboards. We had to keep to a schedule, and he couldn’t always finish a project. Most directors want more work and will listen to what their producer have to say. Ikeda-san will will ignore you if he doesn’t like what you are saying. He’s just a genius. People are scared to work with him. He might become passionate about a project and not keep to a schedule.” -Hideyuki Tomioka

That explains why Tomioka felt he had to move Ikeda off of Gundam Wing. As for working with Katsuyuki Sumizawa:

“Before Gundam Wing we worked together on Ryu Knight. We became friends and he became my go-to writer. He was at his peak.” -Hideyuki Tomioka

“Sometimes he gets into fights with his coworkers because he is so stubborn. He’s a ‘Tokyo Kid’.” -Hideyuki Tomioka

As for his thoughts on the modern Gundam series:

“I haven’t haven’t seen all the new series. Last three I’ve worked on are the end all-be all for me. I feel like the new stuff repackages previous Gundam works.”

“I am no longer directly involved. I am the executive producer on Mobile Suit Gundam: The Origin. We have six one-hour episodes. I owe a lot to executive Yoshikazu Yasuhiko. He was the matchmaker for me and my wife. That was back when I was a production assistant on the movie Arion (Yosuhiko was the director and character designer on “Arion“). He’s stubborn. I told him that he was going to be working on the prologue and he blew up!” -Hideyuki Tomioka  (Editor’s note: Yasuhiko still took the job. He’s the executive director on Mobile Suit Gundam: The Origin)

More about the making of Gundam: The Origin here:

“Sumizawa: Well, Sunrise managing director Mr. (Hideyuki) Tomioka came to me and said “I’d like you to write the screenplay for “The ORIGIN”. Afterwards, Mr. Tomioka and I went to meet with Mr. (Yoshikazu) Yasuhiko at his house, and we had preliminary discussions about the structure and so forth, and that’s kind of where my involvement began. Then Mr. Yasuhiko and I just went on drinking together until dawn. (laughs)”

It never ceases to amaze me just how much of the important work in the anime industry gets done at the bar.

Special thanks to Hideyuki Tomioka for speaking with us. Extra special thanks to Mari Morimoto for going above and beyond with both translation and helping us make sure that we got the details correct. Thanks to Sunrise and Anime Boston for making the interview possible.