In the Name of the Moon: Anime Herald Talks to Stephanie Sheh 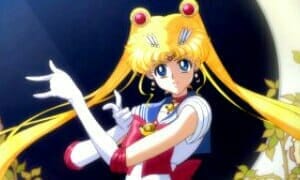 Shephanie Sheh was kind enough to talk to us at Anime Boston. Presented without context:

“You have to put your stuff up on the table.” -Stephanie Sheh

OK, that’s a great quote to leave up there, but I probably should explain how it came up.The first question presented to Ms. Sheh was whether she feels additional pressure to act a as role model after her role as Sailor Moon.

“I feel pressure to get all of my characters right, not just as a role model. However, after Sailor Moon, I’m more cognizant.” -Stephanie Sheh

“You have to put your stuff up on the table.” -Stephanie Sheh

Being a voice actor isn’t easy. More on this later.

Stephanie was the casting director for Batman Ninja. I was curious about her experiences there given the scale of the property:

“It’s a Warner Brothers-DC Comics property, so they want strong quality control. We had to get Warner Brothers’ approval for the casting. A lot of the actors had performed for them before. It was a tricky process. We had to double up for a few of the roles.” –Stephanie Sheh

She wanted to single out one role in particular:

“Tony Hale was great. He’s just such a sweet guy. So normal. And down to Earth. Then he becomes The Joker. The syncing was excellent.” -Stephanie Sheh

In regards to Sailor Moon, Stephanie was asked if she’s like Usagi:

“I’m not like Usagi, save for the love of food. Well, I do have some of the klutziness. I had a lot of twisted ankles growing up.” -Stephanie Sheh

The following question was a big one: Her thoughts on the industry:

“Back in the day you had a lot of time to prepare. Sometimes, you had two years before it came over to America. Piracy is such a huge deal. Now, the timing is much more compressed.” -Stephanie Sheh

“You’re restricted by the timing of the mouth flaps and the movements of the facial muscles. Sometimes, the director would ask for more excitement, which naturally speeds you up, but you have to match the timing on the screen.” -Stephanie Sheh

“Group recordings are a lot of fun. We can play off of each other and change how we say things in response to the context. Often, the writers are in the room, so we can make changes (or not, as the case may be).”

She was asked about her work on Fire Emblem:

“I’ve played a few roles in Fire Emblem. Usually I play sweet, innocent characters. That’s what made playing Tharja so special. Hat’s off to anyone trying to cosplay her, she’s so hot.” -Stephanie Sheh

Ms. Sheh was asked how she got her start in the industry:

“I was writing for the UCLA student newspaper, The Bruin. My editor asked me to write an article about the anime club. The thing is, all of the previous officers had graduated so I couldn’t reach them. I saw a flier saying they were meeting from 7 PM to 10 PM this evening. I thought to myself ‘that’s a really long club meeting’. Also, I had a midterm the next day. I decided to go to the club meeting. As it started, people introduced themselves. Then, the current leader of the club said “Hey, this is Stephanie from The Bruin. She’d like to talk to some club members later.’ Then they turned off the lights, and started showing anime. They showed the first episode of [Neon Genesis] Evangelion, which ended on a cliffhanger. Then they showed the second episode of [Vision of] Escaflowne, which ended on a cliffhanger. I needed to come back next week to know what happened.” -Stephanie Sheh

She added that she interviewed some people from the club and befriended the club secretary. That allowed Stephanie to borrow her anime and catch up what she had missed.

At this point the room broke down into a discussion of what it was like transporting large amounts of anime in the pre-DVD era. Heavy backpacks all around.

“Worst anime industry job? None, really. The worst was from a Craigslist ad for a video game. It was an adult game. It was at someone’s house. The recording booth was in a cupboard in the kitchen. They had wires going all the way to the bedroom where it was taping. As I was reading for the part, it felt like it was really long. What happened was that they had everyone read all of the possible parts.” -Stephanie Sheh

Thankfully, this story had a happy ending:

“Months later, I get a $40 check that I didn’t recognize. I looked into it and realized it was from the game. It was called “Big Booty something something”. I think Ron Jeremy played himself. They ended up using my voice for an Indian character (Stephanie made a confused face and shrugged).” -Stephanie Sheh

She was asked about her work on ERASED:

“The director didn’t give me any information my character wouldn’t have.” -Stephanie Sheh (Editor’s note: Good method for keeping suspense)

And her work on Your Name. (She was the casting director, as well as the English voice of Mitsuha Miyamizu):

“It was great to work on Your Name. I try to tell people to watch it with no information. It’s a bit of a tough sell.” -Stephanie Sheh

“I loved Your Name. because it brought back the idea of hope. We didn’t feel like we could the right actors or actresses. Mike (Michael Sinterniklaas) and I interviewed last.” -Stephanie Sheh

I asked about her thoughts on her career going forward:

“My first love is acting. I would love to do more on camera work. I’d also like to do more original animation. It was great working on [Legend of] Korra, Stretch Armstrong [& the Flex Fighters], We Bare Bears. I’d like to play a main character. I’m not a spring chicken. My metabolism has caught up with me.” -Stephanie Sheh

“They don’t buy me as a mom, or as a doctor or judge. Frances McDormand said, and I’m paraphrasing here, ‘I wasn’t [a type], so I invented my own.’ I’d like to create my own archetype.”

About the voice acting industry:

“It’s really, really tough. I still take classes, as do my peers. The more layers you have, the better. What’s driving you has to be more than just fame or money. You are a one person business. You are the marketing department, the finance department, etc.” Stephanie Sheh (Editor’s note: Great point.)

She wasn’t kidding about how tough it is:

Holy bejeezus I have 726 auditions to listen to this weekend. For all you actors who get frustrated you’re not booking more, know that competition is tough

If you didn’t already know how tight the voice acting community is, they’re on a boat. OK, fine (explicit).

“When I first started doing conventions, no one got paid. They only covered room and airfare. There was no per diem. Anime Expo (AX) didn’t consider Americans as guests of honor. Eventually, they realized that voice actors had an audience.” -Stephanie Sheh

“Autographs are a controversial subject. Now, people can charge $20-40 for a signature. Photos can cost even more. I’m torn. There’s a lot of pirating and anime fans have a lot of money. I’d rather my fans spend that money purchasing anime legally.” -Stephanie Sheh

“I get where the actors are coming from. There are no residuals. It’s mostly non-union work. There’s just nothing on the back end. I find more and more of my peers are charging, especially since there’s always fresh blood coming in.” -Stephanie Sheh

There was a funny moment when Stephanie was asked about her work in the Fate series:

The following question was about her current anime favorites:

“FLCL. Magical Circle Guru-Guru. It’s a spoof of the classic RPGs. Night is short, Walk on Girl. Lu Over the Wall. Kodomo no Omocha. Aka-chan to Boku (Baby and Me). A little kid is forced to raise his little brother. Their mom died in a traffic accident saving the little brother. The older brother blames the little brother for their mom’s death.” -Stephanie Sheh (Editor’s note: The anime is available on Youtube. Be prepared for tears. Lots and lots of tears.)

The final question was about the casting for A Silent Voice:

“A Silent Voice was hard to cast. We were committed to finding a deaf actress. We auditioned five actresses. All of them said that this was what their childhood was like. There was a teenage deaf anime actress who was recommended to me, but she didn’t audition. Her mom didn’t want her to audition, because it was around the fifth anniversary of her brother’s death. He committed suicide due to bullying. He was also deaf. I’m now a lot more aware of how deaf anime fans are left out, when there is no closed captioning.” -Stephanie Sheh

Special thanks to Stephanie Sheh for speaking to us. Thanks to Anime Boston for making this interview possible.