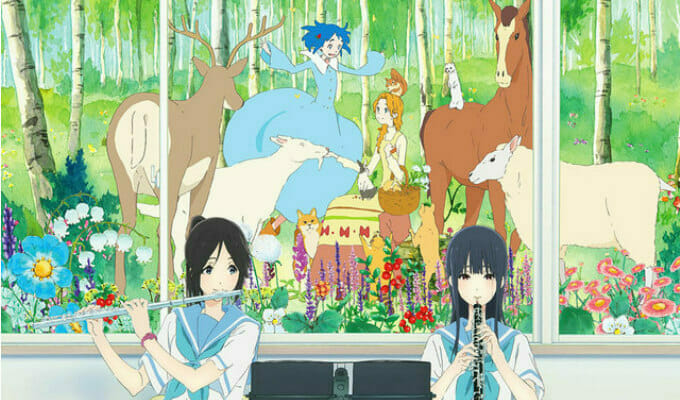 We were able to sit down for a brief conversation with Liz and the Blue Bird composer Kensuke Ushio.

While we talked, he shared his thoughts on:

“Normally I work as a solo artist. I work under the name ‘agraph’” -Kensuke Ushio

(Editor’s note: I’m sure most of you are familiar with his work on various anime soundtracks, but he’s put out three solo albums as ‘agraph’. He gave a great interview about his solo work here.)

Working on Liz and the Blue Bird:

“Once I find my groove, I roll. Here it took me a long time to find the theme.” -Kensuke Ushio

He added that the process was a bit different than it was when he worked on A Silent Voice with director Naoko Yamada. Previously, the two had worked on the music and the storyboards at the same time. For Liz and the Blue Bird, though, the storyboards had already been created, so he had a bit more to work with.

“I used to be a really big anime fan. Now I’m afraid of plagiarism.” -Kensuke Ushio

(Editor’s note: He took five years to come out with his most recent solo album because for the first few years he felt like he was plagiarizing himself.)

Joining Liz and the Blue Bird:

He added that he enjoyed working with her on A Silent Voice, and felt it was a good partnership.

Learning music from a young age:

“My family hosted the music lessons where I and others studied music.” -Kensuke Ushio

Working on the anime Ping Pong:

“The director (Masaaki Yuasa) was quite a bit older. I’d send in my work, he’d smash it back.” -Kensuke Ushio

I should add that they also worked together on Devilman Crybaby, so the process seems to work for them.

The concept of musical prodigies:

“Talent finds talent. Talent is a strong word though. I think of talent as the result of hard work.”

On his thoughts about Liz and the Blue Bird:

“It’s a very delicate film. I was worried about the Japanese reaction to it.” -Kensuke Ushio

Ushio discussed various concepts that he used when creating the music, such as coprime numbers, monotones, and decalcomania.

For decalcomania, it’s probably best to show you, as he did in this interview. It’s a slightly asymmetrical process that allows for high similarity without being identical.

Monotones are sounds with an unchanging pitch. While you generally see them in people who are uncomfortable with public speaking, in music you can use monotones to focus the listener for a short while.

The concept of coprimes is both simple and complex. The individual numbers don’t have to themselves be prime, but neither can share a common factor other than one. For example, twelve and twenty-five are coprime with each other. In terms of music, the concept allows for various pacing structures, which he used to differentiate the two female leads.

We actually talked about this for quite a while and I’ve struggled to find a way to articulate the issue. Just now it struck me: Mozart had the same issue. There are simply too many notes.

On working on Space Dandy:

Ushio has most recently been hanging out with Denki Groove. He’s played with them often enough that I kind of consider him an auxiliary member:

I should add that Ushio has gone on the record:

“Meeting Takkyu Ishino (composer and music producer, a member of Denki Groove) was the impetus for me to enter this line of work, but when I met him, I told him “I don’t want to work for you as an assistant or (music) engineer, I want to become a musician, an artiste, myself”. That’s something that’s I still remember very clearly.”

I linked to them earlier, but they are good enough that I want to mention them again. Ushio gave a pair of great interviews on agraph and Liz and the Blue Bird that I highly recommend you check out.

Thanks to Pony Canyon and Anime Expo for making this interview possible. Special thanks to Kensuke Ushio for talking with us.