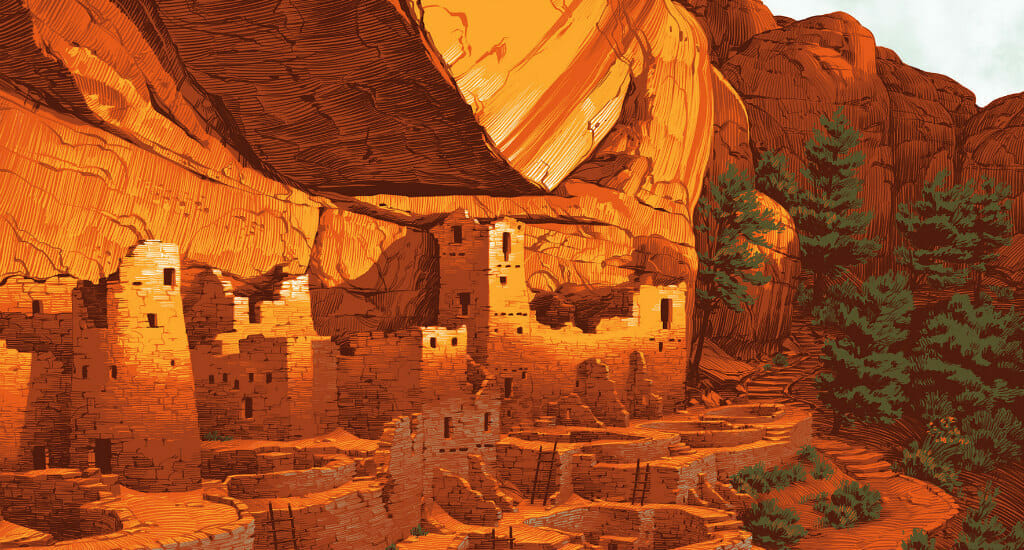 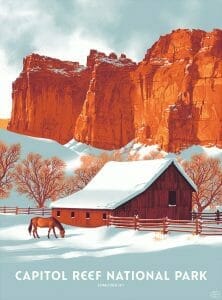 Anime Herald: How did you get involved with the parks project?

Claire Hummel: It’s the 59 Parks Project. They got a bunch of different artists to design screen print posters and donate part of the proceeds. I had been keeping up with it since a couple artists I followed starting doing prints for the project fairly early on. I got super excited because I love national parks. I reached out to J.P., the person in charge of the project, just out of the blue. I said I’d never done screen prints before but I think I’d be good at it and here’s some of my national parks art and here’s my Plein Air sketches I’ve done. I reached out and he was on board. Capital Reef (above) was one of the ones that was available so that was my first poster in the series. He keeps letting me come back to do more, which has been pretty great.

Anime Herald: What is your process to create them?

Claire Hummel: I’d never done screen prints before, I wanted to be very careful about my separations since it is only six colors. It’s pretty limited. I did color thumbnails initially to make sure the palettes worked, and then I treated them like me Plein Air sketches. I do them in ballpoint, it’s a lot of lines. I would block in the major shapes of color. For the major transitions I would go in and sketch it all in.

Anime Herald: What was your second piece for the project?

Claire Hummel: Mesa Verde, and the Bryce Canyon. Bryce Canyon was the one I asked to do, but it was taken originally, and then that person backed out so I got to do it. 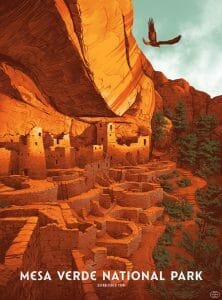 Claire Hummel: I was literally doing a talk with J.P. at Disney feature and I was sharing this story and as we were sitting there he goes “oh, by the way, Bryce Canyon is available again.”

Anime Herald: How about the Jurassic Park print?

Claire Hummel: After I did Capital Reef and Mesa Verde I got on Mondo’s radar to do posters for them. They reached out and gave me a list of franchises that I might want to work with. I saw Beetlejuice and thought “That’d be fun.” Then I saw Jurassic Park and thought “I have to do this.”

Anime Herald: You were already working on the national parks project. It fits.

Claire Hummel: Right, more parks. As someone who just loves dinosaurs, I mean, who didn’t grow up loving dinosaurs, it was just super fun to work on and a perfect match.

Anime Herald: Looking at some of your postcards, are these original works or are they from a story? 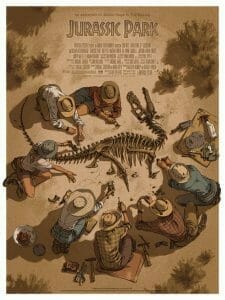 Claire Hummel: Valve, up in Seattle. I joined Campo Santo, the company that made Firewatch, and then we all joined Valve in the past year to make our game there.

Claire Hummel: Wouldn’t that be great? It’s very nice working there, just getting to page through all the folders on our fileshare. It’s full of Moby Francke’s concept art, it’s so good.

Anime Herald: What’s the story behind our dear Russian with the cerberus hat?

Claire Hummel: Her whole persona is hyper-Russian, so I decided I wanted to do a piece of propaganda art for her.

Anime Herald: This Stroika’s for you!

Anime Herald: When did you first realize you wanted to make a career in art?

Claire Hummel: I don’t think I can remember ever not wanting to make a career in art. I grew up with my dad, who was in animation when I was a kid. I visited the office and thought “This is what you do, you just get a job in animation.”

Anime Herald: How did you make that happen? What was your path?

Claire Hummel: Weirdly, my first job was working at Neopets. When I was fourteen I emailed them and told them my art was better than theirs and they should hire me, which I would never do nowadays.

Claire Hummel: Yeah! For seven years between high school and college that was my Summer job. It was a pretty great experience working at a studio, learning the ins and outs, and then Microsoft recruited me out of college, so I worked at Xbox and that got me into games.

Anime Herald: Do you have any advice for aspiring artists?

Claire Hummel: Some of my biggest advice, especially if you’re getting into concept art, but in any field, is that there are always going to be artists that are technically better than you. Better drawers, painters, whatever. What’s important to keep in mind is whatever makes your art specific to you. The reason I follow artists I love is because their passion and lived experience and the things that are particular to them as artists come through in their art regardless of the level of finish. When you’re trying to get jobs in this industry so much of what’s important is your personal voice and what you bring to the table. I think that’s something to keep in mind. I just had someone come up and say that I gave her advice five years ago when I was at CTN. She was worried she had to generify her portfolio and I told her to keep pursuing what she was good at and what she liked doing. She was like “That is what has gotten me jobs!” She was so excited, I got teary-eyed, just need to see that pay off.

Anime Herald: Finally, anything else you’d like to say to our readers?

You can find the prints from the 59 Parks Project here.

You can find Claire’s work here:

Thanks to Claire Hummel for talking with us. Thanks to Lightbox Expo for making this interview possible.