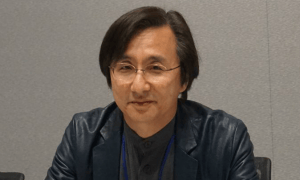 Through his career, Kaoru Wada has moved hearts and brought worlds to life. His scores, which have graced countless video games, anime titles, and films, have become an integral part of every work he’s touched upon. From `asha to D.Gray-man, Princess Tutu to Ninja Scroll, Wada’s compositions have found countless adoring fans.

And, if one were to meet Wada-san himself, they’d find a dedicated individual who devotes his all into each project he takes on, guided by the teachings of legendary composer Ifukibe Akira and a genuine love of his craft.

Many thanks to Wada-san and to the folks at Anime Boston for making this possible.

Yu (Anime Instrumentality): How do you approach arranging versus composing pieces?

Kaoru Wada: For example, one thing that I’ve arranged is Kingdom Hearts. And in the case of Kingdom Hearts, the person doing the composition was Yoko Shimomura, and I did the arrangement. In that case, Shimomura-san had instructions about this sort of worldview that she wanted for the music, and I made it in accordance with that, or arranged it. If you had to say, it would be something more like just working on the details, as opposed to really doing creative work.

Anime Herald (Seth): My first question is about your work on Godzilla. How did that come about?

So, probably, what you want to hear most about is the Cinema Concert I did for the film. So a Cinema Concert, as you might know, is you run the normal movie but have a live orchestra perform while it’s running. So, in fact, in 2014, he would [Ifukube Akira] would be turning a hundred years old. So, in sort of commemoration of his hundredth birthday, we decided to do the cinema concert.

So I agreed to this, of course. But at the time, that original score, we only had about half of it. And so we had to sort of recreate the original score. And because of that reason, I became involved.

Anime Herald (Samantha): What is the biggest difference between working on film, as opposed to an interactive medium such as video games?

Kaoru Wada: So I tend to handle three different types of mediums: TV, film, and game, and for each of them the approach is different. So in Japan, for a TV series, we tend to use the process of creating a lot of songs. So, for example, fifty songs at the very beginning.

And after that, either the sound director, or a role specialized for this called the Song Selector, picks out the songs for those scenes. So, my job is just composition and arrangement.

So in the case of films, you actually compose for each scene. So the score is already done, and there’s just a time block which you compose for. So I even go as far as thinking about the performance itself.

So in the case of video game, it’s different in that you need to think about multiple different patterns of song. So for example, to go to a single destination or goal in the game, there’s different paths you can go to it. So, in total, the approaches to these three different types of mediums are entirely different.

Yu (Anime Instrumentality): Have you ever mentored anyone, or what are your thoughts on teaching music?

Kaoru Wada: To be straight about it, I haven’t. I  haven’t taught in school or mentored anyone.

Kaoru Wada: So, as far as my own compositions go, they are sort of all my children, so I love them all, so it’s very difficult to pick a single one of them. (laughs)

Anime Herald (Samantha): Which project would you say has been the most challenging to work on during your career?

Kaoru Wada: So, for any project, there is always trouble. It’s always difficult. But going even way past the hardships is the joy of making it. So, in fact, something that’s really nice about getting involved in these works is the relationships you get to build with other staff, such as the directors and producers.

Yu (Anime Instrumentality): So I know that tomorrow, you’ll be performing or participating in a concert, and  you will also be going on a Kingdom Hearts orchestra tour in the future. I was wondering what are your thoughts on your experience working with foreign versus Japanese orchestras and musicians?

Kaoru Wada: Fundamentally, there’s not a huge difference between working with foreign [and Japanese groups], but there is sometimes the issue of the quality of a given orchestra. So, whether it be anime, or film, or games, or my own personal music, there’s always the question of how interested the orchestra is in the music itself.

Whether it be domestic or foreign, I sort of approach it the same way, and it’s always fine.

Anime Herald (Seth): When you first became involved in Kingdom Hearts, did you have any idea on how successful it was going to be?

Kaoru Wada: I had no idea! (laughs) So, of course, backing Kingdom Hearts were the massive companies Disney and Square-Enix, so I definitely felt the responsibility there.

Anime Herald (Samantha): Your previously mentioned that Ifukube Akira was your mentor since age seventeen. What would you say has been the greatest lesson that he taught you while you were still learning?

Kaoru Wada: So, there’s quite a few sort of key words come up when it comes to advice I’ve gotten especially when it comes to composing. He said that “true art crosses any ethnic boundaries.” My teacher has not only done film scores, but in fact did a lot of his own serious music.

So there’s another phrase that he often mentioned, which is actually something from China, which translates to something like “Always be kind or nice.” To explain it in more detai, it means something like “great music always is simple,” and those are very important words to me.

Yu (Anime Instrumentality): We know that you learned a lot from Ifukube, but do you have any contemporaries that you admire?”

Kaoru Wada: There are very many time periods to talk about here, but I like very many artists. For example, Stravinsky. And when it comes to American artists, Bernstein, Copeland.

Something that I value highly is the traditional Japanese sounds, and sort of combining that with western technology, and bringing the traditional and modern components together.

Anime Herald (Seth): Following up on that, what was the most recent concert you attended that impressed you, or knocked your socks off?

Kaoru Wada: Last year, for the Kingdom Hearts tour, in fact for the Japan portion, I was conducting it. So while it is a concert, it’s actually sort of more like a cinema concert, where there’s images on the screen, and we’re matching music to it.

In fact, I did the arrangement for that myself, but it was very difficult to arrange it such that it lined up with the images. But the concert, itself, managed to go quite well!

Anime Herald (Samantha): Given the opportunity, if you could work on any project, any potential medium, what would you say would be your dream project?

Kaoru Wada: It’s not quite a dream project, but there’s a couple of things that I’m currently doing. In April, there will be something new coming out, and in Fall, Ace Attorney, the new music will be coming out, and I’m also working on two films. This is how I work. There’s always a lot of work, and I try to do as best as I can with it.

Like I’m doing this time at Anime Boston, where I got to do my concert and show my music to people, that’s something I’d really like to be able to do more of.

Yu (Anime Instrumentality): Are you familiar with Seiji Ozawa? (Wada affirms) Do you have any thoughts or comments about him?

Kaoru Wada: It’s not just me, although I’m not that young, myself. A lot of, almost everyone has been influenced by him. When I was young, he was the person I respected the most, and wanted to be most. In Boston, he was very long a director and, as a Japanese person, that’s very awesome.

Anime Herald (Seth): Can you tell us more about the Ace Attorney project that you have coming out later this year?

Kaoru Wada: In fact, this project was sort of just greenlit, so there’s not much details I can talk about yet! You may know that one of the characters, Goto, he’s going to show up.

Anime Herald (Samantha): As someone whose compositions have been heard through a generation, be it through games, film, and TV, how does it feel to know you’ve had an impact on so many people across the world, and impacted so many lives?

Kaoru Wada: Let’s just say I’m very happy about it. I’m happy about the fact that I’m involved in all of these TV and film [projects], and people want me to get involved in the projects. And, of course, all the people listening to it, and being happy to hear the songs, that makes me very happy.