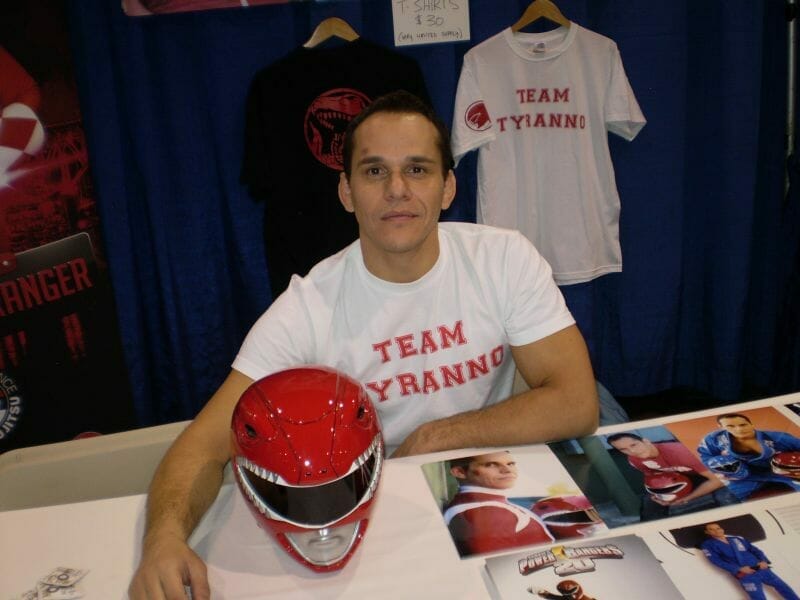 From the day they broke onto the scene in 1993, the Power Rangers have played a major role in the youth of America. Saban’s series about a super-powered team of teenagers with attitude dominated the airwaves, and shaped the childhoods of countless children. At the same time, it proved that the Super Sentai brand could be incredibly viable in the west, if handled correctly. Those that starred in the show were role models, and still enjoy a great deal of popularity today.

Over the weekend of Rhode Island Comic Con 2013, I was fortunate to have the opportunity to speak with Steve Cardenas, the second Red Ranger, about everything from Power Rangers, to how things progressed after his work on the show ended.

We’d like to thank Mr. Cardenas for taking the time to answer our questions. 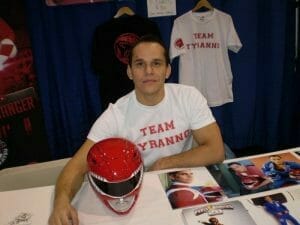 Anime Herald: Can you tell us a little bit about the audition process, and how you got the job as the Red Ranger?

Steve Cardenas: Sure! I was living in Texas, and a buddy of mine had heard about this audition for Power Rangers on the Radio. The show had already been on for a year. It was already pretty wildly popular, so I knew the show, but they told me I should go try out for it. And I just took a shot! Basically, I went to the audition, there was, like, 4,000 people there. I took a look at the crowd, and I was like “Oh my god, there’s no way I’m gonna get through this crowd of people! No way, I’m gonna make it past the first round.”

Anyway, surprisingly enough, I showed them my routine, and they called me back a couple of hours later. They were like “we want to have you come back and audition again.” And then, I went and auditioned for them again, and they said “Alright, well don’t call us, we’ll call you.” (laughs) And, sure enough, a couple of days later, they called me back. They were like, “We showed the video footage of your audition to the producers. We want to have you come out to California. We bought you a plane ticket. So come out, pack a bag for a couple of days, and come meet the producers. You’ve made it into the third round!” I’m like “Oh, sweet!”

So I went there, and I went and auditioned. I met Haim Saban. I auditioned for Haim Saban. And it was sort of like American Idol because Haim Saban was in the middle like Simon Cowell. And there was, like, the other producers, Shuki Levy and a couple of other people and the casting director. They were all sitting there like a row of judges.

Anime Herald: Absolutely! And how did it feel to take over such a well-known role, being pretty much one of the big guys?

And then, when I found out that I was actually going to be taking over for the Red Ranger, that the other Red Ranger was gone, I was like “ooh, man, that’s a pretty big role to fill!” So I was definitely concerned about that. And I was hoping that I could do it justice. And in the beginning, I felt like, they made me feel as comfortable as I could on the set and stuff like that. But I think I needed a lot of work, you know? (laughs) So anyway, I kind of got comfortable in the role later on, and stuff, so I was happy about that.

Anime Herald: And, from what I understand, Power Rangers has always been an adaptation of the Super Sentai series from Japan. So what was it like to go from fully acting out a certain scene as a character, to going to a recording booth to act out the fight scenes?

Steve Cardenas: That was an interesting process! The whole film process in general was new to me. but learning about ADR, Automated Dialogue Replacement, and learning just kind of like, learning how to do all of these grunts, and breaths, and stuff like that when we were doing the, ah, watching the fight scenes. So we’re sitting in a little room with a TV screen. We’re watching the guys do their action with no sound. And then we were kind of putting the sound in, going “Haah! Hah! Hyah! Oh!” And we’d fall over, and we’d go “aah!” and roll around on the ground, you know? So doing all of that kind of grunting noise, and stuff, and it was just kind of funny! So if people would still be looking at it from the outside, just watching me go “hah! hah! hah!” with the headphones on and stuff, it would’ve been funny. But I can imagine, so…

Anime Herald: And do you have an episode that stands out, one that was particularly fun to film, or one that you actually enjoy looking back and watching?

Anime Herald: I can imagine! I did some looking on sites like IMDB and Wikipedia, and it looks like, after Power Rangers, you kind of fell out of show business, it looks like?

Anime Herald: So what would you say is your current calling in life?

Steve Cardenas: I am a martial arts instructor. I own my own studio. It’s called Force Balance Brazilian Jiu Jitsu. You can check it out at www.forcebalancebjj.com, and that’s what I do full time now. If I’m not doing these conventions, I devote, I teach martial arts to everybody: adults, kids, everyone at my studio!

Anime Herald: And what inspired you get into martial arts to begin with?

Steve Cardenas: Karate Kid! It’s why I was so excited to meet Billy Zabka. I got my pictures with him, and stuff like that! I was like, “dude, you guys are the reason that I wanted to get into martial arts, man!”

Anime Herald: And how did you get involved in the convention circuit, out of curiosity?

Steve Cardenas: Well, the first convention I ever did was the PowerMorphacon. And I can’t remember who was the one that told me. I think that I ran into Paulie [Paul Schrier], or made connection with Paulie, and he was saying “Hey! I hear they’re doing a Power Rangers convention! People are going to go, the fans are going to come and meet the Power Rangers and stuff!” And I was, like “cool! I’d like to be a part of that!” And that’s kind of how it started.

And then, from there, it kicked off, and I met somebody that helped book me for a show here, and a show there. And I did a couple of shows a year, that was pretty much it. And when I opened up Force Balance Jiu Jitsu, I stopped doing shows altogether. Because I needed to devote the time to build that up. And so, from there, I heard from Jason Frank. Jason Frank called me, and he was like “dude. You’ve gotta come back onto the convention circuit. You’ve gotta start doing shows again. You’ve gotta take pictures with your fans, and do pictures in the suit, and all the stuff like that. It’ll be fun, man!” So I said “alright, cool!” And that’s how I got back into it!

Anime Herald: And as a final question, is there anything that you’d like to say to our readers?