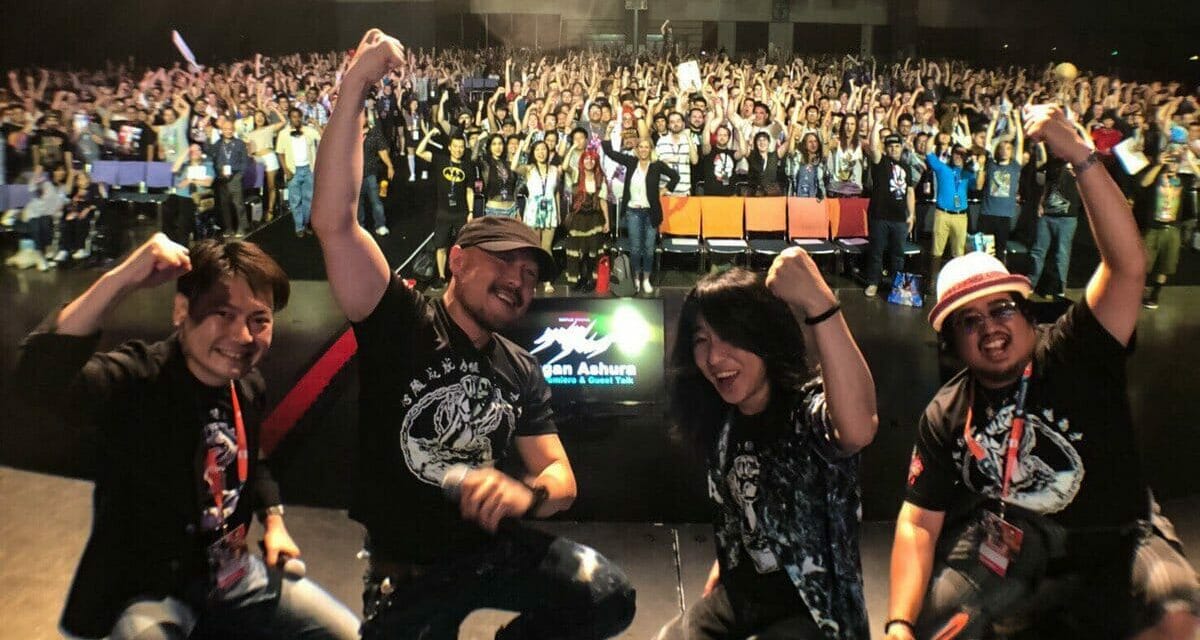 Arpeggio of Blue Steel is one of my favorite anime, so I was thrilled to be able to sit down and talk with director Seiji Kishi about his new project, Kengan Ashura. Since that conversation happened after the Kengan Ashura press conference, I’ll start with the press conference, and then move on to the interview.

The participants in the press conference were as follows:

Yuji Higa kicked us off:

“I came here last year (in support of Classroom of the Elite). There are a lot of anime fans at Anime Expo. This year we’re bringing an action packed title, with cool looking fighting.” -Yuji Higa

“For our animation style, we went with a realistic comic characters and a 3D animation cell look type. Fighting is the theme. Action! Fighting! Wrestling!” -Seiji Kishi

“It’s my first time in Los Angeles. It’s very hot. I’ve noticed that the titles that were popular here were a pleasant surprise.” -Makoto Uezu

(Editor’s note: It was indeed very hot. A certain anime legend may have said that it was so hot, it felt like his balls dropped a second time.)

“The heat is my fault. Places that I travel to become very hot.” -Yasuharu Takanashi

“I’ve been to Los Angeles for live music events before. Looking at all the cosplay for titles I’ve worked on is very fun.” -Yasuharu Takanashi

“LARX productions is handling the complete animation. We invited real fighters into the studio. We got people of similar size of the fighters in the story. We are not using motion capture because that would be realistic and boring. We just use the images of the moves, but it’s so hard on the staff, it’s like we get punched.” -Seiji Kishi

“Kengan Ashura is all about jacked up guys (Kishi flexed his bicep).” -Seiji Kishi

“Me and director Kishi have worked in anime together for ten years. We’ve done a lot, but never done something with serious fighting.” -Makoto Uezu

“We wanted to create an anime that boys would love.” -Seiji Kishi

“We really wanted to focus on that underground style of fighting. Anything goes, boxing, sumo wrestling. When we invited fighters in we told them not to show off their professional training.” -Makoto Uezu

“Or my Ju Jitsu.” -Yasuharu Takanashi

(Yasuharu Takanashi took off his shirt, revealing that he’s ripped.)

Back to Kengan Ashura:

“Big Japanese corporations have fighters that act as their champions. The original story takes place in the Japanese underground. These fighters battle each other to settle company differences.” -Seiji Kishi

There was a further discussion of how they were looking for a unique look and style. They were very careful to invite experienced martial artists into the studio, who matched the body types of the characters they were looking for. If the character was fat, so was the fighter they invited. Apart from that, the only instruction was to fight as they would if they were an underground fighter with no rules. The animation itself was a mix of hand drawn 2D and computer animated 3D. As we saw with the premier, it’s a unique look that will be easily recognizable. However, before we get to the premier, or the interview with Seiji Kishi, let’s do photo time:

That was courtesy of Yasuharu Takanashi.

From the première at Anime Expo.

Some comments from the event:

“The theme of the anime is the violence behind the Japanese economy.” -Yuji Higa

When asked what kind of music fans can expect from the soundtrack:

At this point, the premier began and we got to see the violence firsthand.

Now, it is time for the interview with Seiji Kishi:

“The first fight you see in the anime is the first fight we animated. When we brought in the fighter to play Lito (the first opponent in the anime), we told him ‘don’t use good form’. Lito is not using a martial arts style. He’s just naturally violent.” -Seiji Kishi

“Both the look and the story are very close to the manga. With only 20 minutes, we have have to focus on the story arrangement.” -Seiji Kishi

“We made a few slight changes. We’ve got to make it exciting.” -Seiji Kishi

“Hand drawn violence is quite difficult. We used a cell-look to make it possible. It’s very complicated. With the 3D animation, it’s a unique look.” -Seiji Kishi

“We can’t compete with Pixar by doing the same things they are doing. By going with a Japanese cell-look, we can be both 2D and 3D and have a chance to do something special.” -Seiji Kishi

I asked if there were any complications doing the adaptation:

“We were on the same page. We all wanted to make the same thing. We all liked the comic and wanted to bring that comic to life in an anime. There were a few cases where we had similar ideas, and had some small discussions to come up with the final concepts together.” -Seiji Kishi

We closed with a bit of discussion about what was popular in America. Sandrovich Yabako’s manga and Doromeon’s art-style are a great place to start. Like Kishi and Takanashi, Yabako is an experienced martial artist. I can’t do Kengan Ashura justice in describing just how aggressive and violent the anime is going to be. It’ll be available as a Netflix Original in 2019.

Thanks to Pony Canyon for making this interview possible. Thanks to Seiji Kishi for sitting down with us. Special thanks to Ms. Atsuko Kohata for translating.