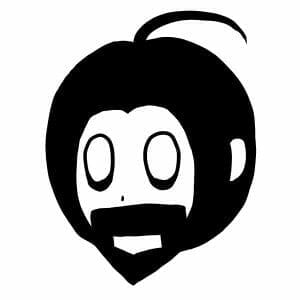 Anime Herald: Where did you first get the idea to create a manga about the violence behind the Japanese economy?

Yabako Sandrovich: Before I became a professional mangaka, I was thinking about creating martial arts comic books. Since there are too many martial arts comic books out there already, I wanted to do something new. I thought about making corporations fight each other. I had no plans to become a professional. I never thought I’d be able to show it to the public, but now that it’s been released, I’m very grateful.

Yabako Sandrovich: When I was thinking about getting a new job, an editor from Shogakukan, Mr. Kobayashi (present editor in charge) has contacted me after reading

my original manga on the web asking, “Won’t you try writing manga professionally?”

It was then after I made my storyboard (or ‘name’ in japanese) for “Kengan Ashura.”

I was introduced to sir Daromeon, who they told me was extraordinarily skilled in drawing.

Anime Herald: Something that differentiated Kengan Ashura from other similar manga was the sheer amount of violence. Was that always your intent?

Yabako Sandrovich:  Because I wanted to illustrate various martial arts, I’ve shown action scenes with mixed martial arts. I had to be careful not to make the battle too brutal, so I’ve had to hit the brakes a few times.

Anime Herald: What was your (Daromeon) initial reaction when you first read the story?

Daromeon: Me personally, I had zero knowledge of martial arts. I hadn’t read Baki. My initial reaction was “Oh, there’s another martial arts manga. I might be able to draw it because I do draw muscles and stuff, but I don’t know the proper stances or how to punch.” That was one of my concerns.

Anime Herald: Last year the production staff for the anime said they weren’t looking for professionally trained fighting. Was that your intent in the manga as well?

“We really wanted to focus on that underground style of fighting. Anything goes, boxing, sumo wrestling. When we invited fighters in we told them not to show off their professional training.” -Writer and story editor Makoto Uezu

Yabako Sandrovich: It depends on the character. Some characters have street fighter origins, while others have martial arts origins. I want to illustrate various styles colliding to show “Who is the strongest?”

Anime Herald: Did any characters become your favorites over time?

Yabako Sandrovich: When I get deeply interested in the story itself, I tend to focus on certain characters. I want to remain neutral between the characters, though. I don’t want it to become imbalanced. I don’t have one specific favorite. 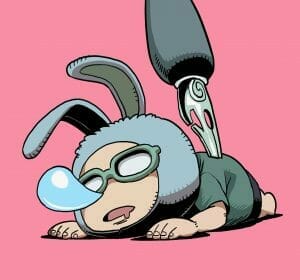 Anime Herald: Are there any characters you found particularly tough to draw?

Anime Herald: Kure Karla is quite unique. I’ve never seen another character like her. How did you create her?

Yabako Sandrovich: With her appearance, the main character showed a different side. Since she’s from an assassin family, she doesn’t have normal humanity. Confronting her, the main character, often having a cool attitude, shows some human feature, which is a contrast to his violent nature.

Anime Herald: I’ve referred to her as “Bloody Waifu”

Anime Herald: Kengan Ashura won the Ura Sunday competition to become an anime. Were you surprised at the victory?

Yabako Sandrovich: We didn’t predict that we would win, so there was surprise and

happiness. But then, we had to think about “what to do next?” 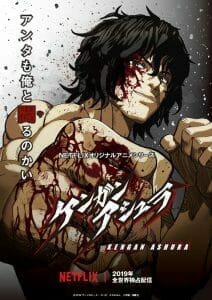 Anime Herald: Your past is shrouded in some mystery. Can you share how you became a mangaka?

Yabako Sandrovich: Before I became a mangaka, I was a regular business man. When I was twenty-four, my boss gave me an early release. I went back home and started drawing on my old computer. I wasn’t very good at using it, but I started drawing and entering the words, which little by little became a manga. Eventually, I uploaded the first episode (Gudo no Kobushi). The next day I uploaded the second episode, then the third. I uploaded manga everyday, which made many people to come and read it. One of the readers happened to be my present editor in charge, Mr. Kobayashi. His contact to me was my start to become a pro.

Anime Herald: What was it about?

Yabako Sandrovich: The plot was about a karate guy who was told by his master that he won’t get any better even if continues practicing. He decides to learn different kinds of martial arts and turn it into mixed-martial arts. He goes into a karate tournament, and that’s how the story moves on. There are some similarities to how the main character in Kengan Ashura develops.

Anime Herald: It looks like martial arts has been a passion for you ever since you were young. Is that the case?

Yabako Sandrovich: I started kendo in middle school. Then I moved onto Shorinji Kenpo. The longest martial art I studied was karate, becoming a black belt in four years. After that, I studied mixed martial arts, such as grappling. The reason I was so passionate about studying martial arts is that I wanted to become strong. I was intent on not being weak. That’s what drove me. I don’t practice martial arts anymore. Just weight training.

Anime Herald: What was the story with you almost becoming a commercial fisherman?

Yabako Sandrovich: I used to live near the port. When I quit my job as a salaryman, I went to a commercial fishing career fair. I was getting pulled by a lot of these companies because of my age, because I was one of the younger ones. However, at that time, I had already received an invitation to become a mangaka, so I had to turn them down.

Anime Herald: How closely are you working with the anime production team?

Yabako Sandrovich: I let the anime production team do their own thing. I trust them. I’m actually fairly close with director (Seiji) Kishi as sometimes we do weight training together.

Anime Herald: How about you [Daromeon], how closely are you working with the anime staff?

Daromeon: Even though most of the characters are in 3D, they did a drawing-based character design. There were some really small details that made the characters look different from the manga, so I made a few minor corrections.

Anime Herald: Were there any times you wanted to change a character for the animation to make them look different or better in motion than it would in the manga?

Daromeon: I guess there are times where I had that kind of thought. I thought that would be ignorant since I’m not a professional animator.

Anime Herald: Have you been surprised at the level of workload required to make an anime?

Daromeon: I used to make animations as an amateur so I have a good idea how hard it is, but commercially, I’m not a professional so… (smiles)

Anime Herald: The anime comes out in a few weeks on Netflix. How are you feeling? Are you excited, or nervous?

Daromeon: On YouTube, they have the trailers. On the comments on Youtube, half are “this is CGI rubbish.” and half are “I’m so hyped!”

I’m really curious if I search on Twitter how people will react to it.

Anime Herald: You’re gonna get a lot of good and bad reactions. I’ve read the manga, I know what’s coming. Are you ready for August 1st and the whole rush of comments?

Daromeon: I’m not expecting the whole rush of comments. They aren’t doing all of the episodes.

Anime Herald: Oh, they’re going to do the first cour and the second cour?

Anime Herald: What was your reaction when you realized it was Netflix who was going to be bringing it over.

Daromeon: I subscribed to Netflix the first day they came to Japan. I’m a big fan of Netflix. I was happy with that.

Anime Herald: Have you had a chance to check out any of the cool geek stores in Los Angeles?

Daromeon: Some were pretty far away. I’m really interested, but I don’t know if I’ll have the time.

I bought some goods at Anime Expo itself. I’d like to go to a bookstore and check out a grocery store to see what kind of vegetables they have.

Anime Herald: Is this your first Anime Expo?

Anime Herald: Do you go to the major expos in Japan?

Daromeon: Yes. I’ve been to Comiket.

Anime Herald: I’ve heard that as crowded as Anime Expo is, it’s a breeze compared to Comiket.

Daromeon: Yes it is. But, there is more cosplay here. Since Japan is so crowded, we limit the cosplays. The information walking around is bigger here than at Comiket.

Anime Herald: A lot of people are comparing Kengan Ashura to Baki. Are you thinking about that comparison at all?

Yabako Sandrovich: I’m actually a big fan of Baki. During my amateur years, I parodied Baki quite a bit. I’ve met with the creator Keisuke Itagaki

Anime Herald: What’s your creative process for coming up with all of this violence?

Yabako Sandrovich: Ideas come to me instinctively, all of a sudden. I can be talking to my family at dinner, or talking with friends and an idea will just come to me. Once that happens I just stop. I can’t multitask. I just think of that one idea in my mind and that’s when I begin the process of creating the manga.

The Kengan Ashura anime started streaming as a Netflix Original on July 31. The series is available now for subscribers worldwide.