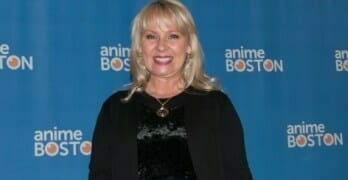 Anyone that’s watched anime over the years probably knows Wendee Lee in some form or another. Since the days of Streamline’s heyday, Lee has been a key player in the voice acting community. Her resume reads like a who’s who of anime characters, as it’s absolutely bursting with roles like Haruhi Suzumiya (The Melancholy of Haruhi Suzumiya), Sakura Shinguji (Sakura Wars), Yuri (Dirty Pair), and Faye Valentine (Cowboy Bebop). Her voice has welcomed viewers into the hobby for generations, and will continue to do so for many years to come.

At Anime Boston 2014, we were fortunate enough to sit with Ms. Lee for a round robin interview. The room was packed with eager fans, and industry watchers alike. Outside, the voices of over 25,000 fans could be heard as a constant murmur, as excitement buzzed through the pack of reporters. Lee was a warm, friendly person who seemed to enjoy just sitting and talking with each and every one of us. The session was a light, fun experience as we traded jokes, and laughter seemed to ring through the room. Though our conversation was short, Lee’s insights and anecdotes were truly incredible to hear.

I would like to thank Ms. Lee for taking the time to speak with us. I’d also like to thank Jamison and the rest of the Anime Boston Staff for helping to make this happen. 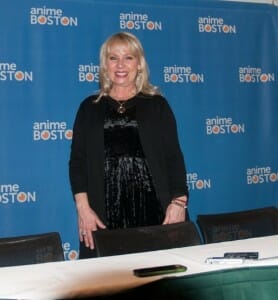 Anime Herald: You’re one of the longest-running actresses in the industry today, who’s been around since the days of, like, Harmony Gold and Streamline, even. So you’ve definitely seen a lot happen to the industry as a whole. How would you say that the anime world has changed since you’ve started acting, and what would you say is the most positive, most surprising change that has come out in your career?

Wendee Lee: I’ll start with the latter part of your question. The best thing that’s happened is that it’s blown up, and that it’s permanent! When we first started, people thought of anime as sort of a cult. Like, you know, an offshoot of the industry of entertainment proper. And clearly it’s a fan-driven art form, and it’s here to stay. I mean, after all the downturns, ups and downs in anime doing well, anime being terminated, Toonami being closed, Toonami coming back… it’s clearly because the fans keep it alive, and the loyalty.

And the fact that we have contact with fans. When I first started, I had no idea where any of the work we were doing was going to end up! We used to laugh and say “Well! Here’s one for, ah, the guys on the submarines!” Or, you know, “Here’s one for, you know, the guys in prison!” I mean, we just didn’t know where… (laughs) where any of our content was going! There were no TV channels until Robotech got picked up in syndication. That was pretty cool.

And just to see the evolution, and to be a part of that, and to maybe be a part of opening up the door for other women in animation is a huge honor. And I take that responsibility very seriously, and I’d like to think that I’ve kicked in another crack or two in the glass ceiling of women being directors and writers, and being able to be taken very seriously as far as being able to play all genres. So that’s really exciting!

When I started, everything was analogue. The technological aspect of recording was reel-to-reel, big giant half-inch reel-to-reel tapes, and they had to run past the tape heads, and then that had to be locked with the picture. And sometimes, you’d get a great take of something that you’ve recorded and the machines didn’t lock up, and you didn’t catch it. So you’d have to it again and again until things were all jiving. It was a really, really different way of working. Now, it’s super efficient. We’re almost paperless in the studio. ALmost all of our scripts are on ah, either a monitor or an iPad. And it’s more efficient, and that helps keep costs down, and I think that also has lent itself to being a more affordable art form, to have more projects greenlit.

But there’s been a huge evolution in animation proper, and certainly in anime. And to be a part of the very beginning is, you know, it’s pretty incredible when I think back on it now. And to have been so close to Carl Macek, who was so critical and instrumental in bringing anime from Japan, like meeting with folks from Japan and bringing it here and having that vision. And I just found out recently that Carl and Kevin [Seymore] worked together, and knew each other very well! So those two people catapulted my career. They picked me out of the chorus, and put me in lead roles. And I could, I’m eternally grateful. I feel so blessed!

Anime Herald: As you’ve mentioned several times, you’ve voiced over 300 characters. You’ve been in so many pivotal roles throughout the years, from Dragon Ball

Wendee Lee: Oh, that’s so great! THank you for saying that! You know, really. How many times have you heard me say how honored I am? I mean, I really… I feel like I was given an incredible opportunity at the right time. And it’s so interesting, because I remember being in junior high school, and having a Civics teacher, of all people, actually make us contemplate where our lives were going. And we had to draw out an outline for where we would be in the next five years, the next ten years, and the next fifteen years. And it’s really interesting, because I remember writing… we had to describe what kind of car we would be driving, where we would be going to school, what kind of work we would do. And I remember writing this essay, basically about where I saw myself professionally. And I was dead serious about being an actor.

And I was very shy about letting people know about it, because I wanted to be taken seriously. And I didn’t feel like people would take me seriously until I actually had working actor credits. Yeah, I starred in our high school shows, our junior high school musicals… I got Best Actor awards then, and all that. But that was a little tiny pool, where I could be a big fish. So I just, I didn’t know if people would take me seriously as pursuing it for life, but I knew that’s where my life was going some way, somehow. And I remember describing this strange place that I would be in the entertainment industry. It’s almost like I had a psychic hit about it. Because I remember saying it wouldn’t be your average kind of acting job. It would be something unusual, involved in post-production. And that I somehow would be a working actor. I would be very busy, but I would have many other things that I would be doing in my industry and hopefully directing. And I included that I would be a choreographer, and that I would be singing, and that I really wanted as many job opportunities as I could in the entertainment industry. And boy, if that didn’t happen! I should have been more specific and said I wanted to be a rock star! A star of films! (laughs)

But I’ve come to terms with that. And people in animation tend to have egos a little more in check, because we don’t have to be in the front, in te limelight, the star of the show. We’re pretty cool being behind the scenes and, you know, laughing in the studio, and having fun creating clever outtakes. (laughs)

Wendee Lee: Yeah, right? (laughs) Oh my god! I mean, just one of those and you’d never work again! I mean, you just, there’s too many other people that want to take your job at any given moment, you know? So yeah, I feel like, I don’t even know how it all really happened. I can deconstruct it on some level, but the truth is I feel very guided. I feel like something much bigger at play in my destiny brought me to where I am, and I take it seriously. And I’m so grateful I can help other women achieve even better goals than mine, or more! And I’m seeing them come up now! I mean, like, they’re starting to come up the ranks, they’re catching up to my credit list and oh, look at that! Pretty soon, I’m be going “go!” (laughs)