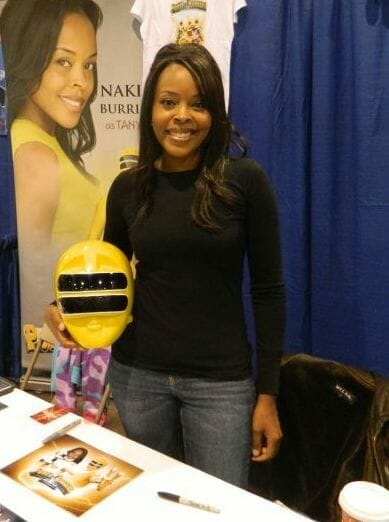 For many kids (and kids at heart), the Mighty Morphin’ Power Rangers was a staple of growing up. The exploits of costumed crusaders fueled imaginations, and created lasting memories for countless fans. At the same time, the series was a phenomenon that launched careers and dominated the airwaves through much of the ’90s. Even today, the franchise enjoys a dedicated fanbase.

Over the weekend of Rhode Island Comic Con 2013, I was fortunate to have the opportunity to speak with Nakia Burrise, who kick-started her acting career as she kicked butt as Yellow Ranger Tanya on Power Rangers Zeo.

We’d like to thank Ms. Burrise for taking the time to answer our questions.

Anime Herald: Can you tell us a little about the audition process , and how you got the job?

Nakia Burrise: When I auditioned for Power Rangers, I was a junior in college at UCLA. Got the call from my manager. Went to the initial audition, there was probably, I don’t know, a couple of hundred girls auditioning. And we got a callback, and it went down to about forty. Then after forty, it went down to about seven, then it went down to three. I had five auditions for it, and then a screen test. It was three of us screen testing, and then it came down to two of us. And then God blessed me with the role!

Anime Herald: Very cool! And to my understanding, Power Rangers is basically an adaptation of the Japanese Super Sentai series.

Anime Herald: So what was it like to go from fully acting out a role, to going into the recording booth and just recording your lines?

Nakia Burrise: Well you know, it was a new experience for me, because I was going to school studying this! So Power Rangers was my first major role, series, and so forth. So it was a learning experience, for sure!

Anime Herald: And do you have an episode that really stands out? Something that you either really liked performing in, or something you like looking back and watching?

Nakia Burrise: You know, there were three. Three episodes, one of them was the baseball episode, when I played baseball. I think that was probably my second or third episode on Power Rangers. They found out that I played baseball, so they decided to make an episode about that.

Another one was, ah, I got a recording contract. They heard me singing in my dressing room, so they made an episode about that. And the last one was, that I can think of, was when Jason David Frank and I, we couldn’t speak. We could only sing, so everything was opera, every line! And then, (laughs) the funny thing was even when the cameras were off, we were still singing, so it was fun!

Anime Herald: And out of curiosity, did you have to learn a form of martial arts for the show?

Nakia Burrise: Yes, well, you know, we learned different fighting techniques. Especially for the movie, the Turbo movie. So we did training for that for a few weeks. But yeah, all of 0the guys are martial artists, and Katherine and I came in as dancers, and had to learn martial arts for it.

Anime Herald: I did some looking into your IMDB and Wikipedia pages. It looks like you’ve gone on to have a pretty well-rounded acting career. Is there a particular role that you really enjoyed doing outside of Power Rangers, and why would that be?

Nakia Burrise: Oh, that’s interesting! I do the voice-over for Barbie: Life in the Dream House, the character Nikki. I do enjoy that. That’s been great, I’ve been doing that for two years. I just started a role on Hart of Dixie and it’s… she’s so character-y! I really love comedy, so, I play, the episode hasn’t aired yet, but I play Patty Pritchett, and she’s just funny! She’s such a character, so I really enjoy doing that!

Anime Herald: Great to hear! Now, total bucket list time, if there was one role you could have, any in the world, any time in history, what would it be and why?

Nakia Burrise: Ooh! An existing one, or that would be made up?

Anime Herald: Either or.

Anime Herald: And out of curiosity, how did you get involved in the convention circuit?

Nakia Burrise: A friend asked me, and I started in 2009. I was introduced because I didn’t know about conventions before then, so got introduced then. And I’ve been doing a few a year now, so it’s been cool!

Anime Herald: And just one more question: Do you have anything that you’d like to say to our readers?

Nakia Burrise: Whatever God has put in your heart to do in the future, and you know that it’s there, you need to just strive. Because you’re gonna hit obstacles – I’ve hit many, many obstacles. But if it’s something that you really really want, you have to go for it!