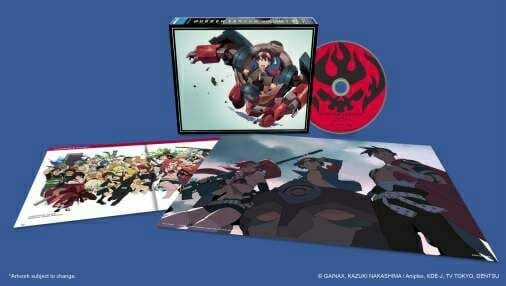 Aniplex of America announced that they will release Gurren Lagann on domestic DVD. The series will be released across five volumes, each priced at $59.98.

The first volume, which includes five episodes, will be released on November 11, 2014. It will include a double-sided poster, clean openings and closings, a preview for Episode 5, and a 16-page companion booklet.

The second volume, which also contains five episodes, will include a double-sided poster and companion booklet, as well as clean openings and the broadcast version of Episode 6. Volume 2 will hit stores on December 9, 2014.

Gurren Lagann was originally released in the west by Bandai Entertainment. The entire series can be had for about $45 on DVD via Amazon, as of press time.

Each Gurren Lagann Blu-ray Volume will feature 5 episodes in both the original Japanese and English audios with English subtitles. The bonus features for the first two volumes will include a double sided poster and a 16 page booklet featuring interviews with the creators and an illustration gallery. The first volume blu-ray will also include the textless opening and ending and the OA version of the Episode 5 preview.

The Gurren Lagann Blu-rays will be available for sale in the U.S. and Canada while supplies last.Gurren Lagann is also available in a complete DVD Box Set and can also be seen on Adult Swim’s TOONAMI™ Saturday line-up at 2:00AM EST.

Both Gurren Lagann Blu-ray Vol. 1 and Vol. 2 can be pre-ordered and purchased at:

For complete detailed information on the Gurren Lagann Blu-ray Vol. 1 and Vol. 2 visit:AniplexUSA.com/gurrenlagannbd

This is the story of a man who has yet to realize what destiny holds in store for him….

In the distant future, mankind has lived quietly and restlessly underground for hundreds of years, subject to earthquakes and cave-ins. Living in one such village are 2 young men: one named Simon who is shy and naïve, and the other named Kamina who believes in the existence of a “surface” world above their heads. The destiny of these two starts moving drastically when the ceiling of their village falls in, and a gigantic “Gunmen” and a beautiful girl named Yoko, wielding a superconductive rifle, come from the surface. Together, Kamina, Simon and Yoko ride the mecha “Lagann” that Simon digs out of the ground, and fly up to the surface!