Aniplex of America announced that they acquired the domestic rights for WWW.Wagnaria!! (WWW.Working!!). The company plans to stream the show as part of its Fall 2016 simulcast lineup.

WWW.Wagnaria!! will hit Crunchyroll on October 1, 2016 at 9:00AM Pacific (noon eastern), one hour after the Japanese broadcast. Daisuki will also stream the series, though it will receive episodes one week after broadcast.

Aniplex of America Acquires WWW.WAGNARIA!! for their Fall Lineup 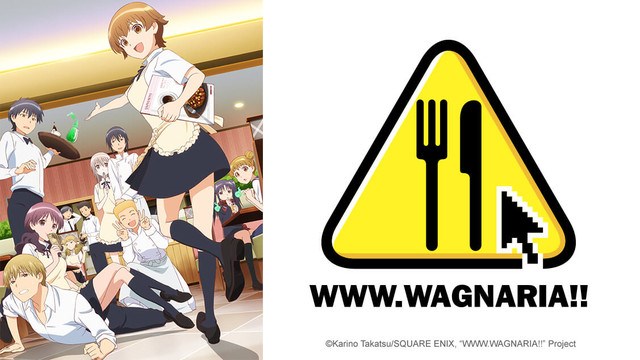 SANTA MONICA, CA (September 29, 2016) – Aniplex of America Inc. announced today that they have acquired WWW.WAGNARIA!! for their upcoming fall season lineup. WWW.WAGNARIA!! will be simulcast on Crunchyroll (www.Crunchyroll.com) starting on October 1, 2016 at 9:00AM PDT – one hour after the broadcast in Japan. It will also be streamed on DAISUKI (Daisuki.net) one week after the original broadcast.

WWW.WAGNARIA!! has been adapted from the widely popular webcomic “Web-ban Working!!” by Karino Takatsu, the original creator of WAGNARIA!!. The setting for the new series is a sister restaurant to the one featured in WAGNARIA!!, featuring new characters with even quirkier personalities. The series features an all-star cast including Yuuichi Nakamura (The irregular at magic high school, DURARARA!!, Oreimo) as Daisuke Higashida, Haruka Tomatsu (Sword Art Online, Anohana, MAGI) as Hana Miyakoshi, Kouki Uchiyama (NISEKOI, Charlotte, The Anthem of the Heart) as Masahiro Adachi, and Sora Amamiya (ALDNOAH.ZERO, The Anthem of the Heart, Plastic Memories) as Shiho Kamakura.

Daisuke Higashida starts working part-time at a family restaurant due to financial difficulties at home. However, between a shift manager who is hopeless when it comes to cooking, and the wait staff’s reliance on the power of money, it seems this restaurant doesn’t have a single normal person working there!