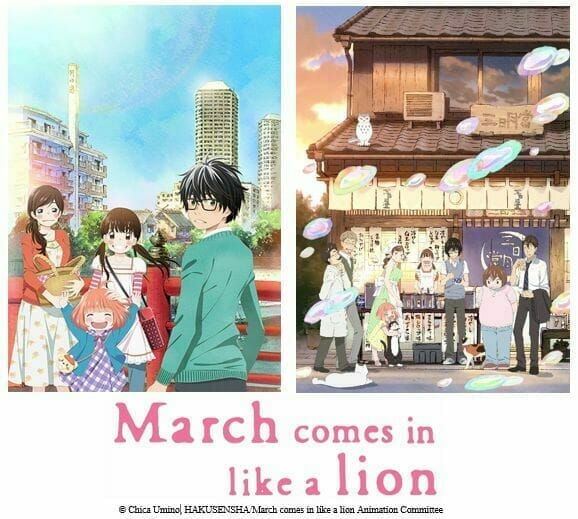 Aniplex of America announced that they acquired the domestic rights to the second season of March Comes in Like a Lion. They will stream the series as a simulcast starting October 14 on Crunchyroll.

Moreover, the company outlined their upcoming Blu-releases for the show’s first season. March Comes in Like a Lion will be released across two sets, both of which will retail for $159.98. The release schedule is as follows:

SANTA MONICA, CA (October 1, 2017) – At their industry panel at Anime Weekend Atlanta (Atlanta, GA), Aniplex of America announced the release of March comes in like a lion season 1 on Blu-ray and the acquisition of season 2. The Volume 1 and 2 Blu-ray Box Sets will feature the highly anticipated English dub with two of the episodes adapted and voice directed by seasoned veteran, Wendee Lee (Blue Exorcist, Your lie in April). The heartfelt series is based on an award winning manga by Chica Umino, who is best known as the creator of Honey and Clover. Produced by studio SHAFT (Puella Magi Madoka Magica, KIZUMONOGATARI), March comes in like a lion is helmed by a well-respected creative team including Director Akiyuki Shimbou (Puella Magi Madoka Magica,, Monogatari series) and Character Designer Nobuhiro Sugiyama (NISEKOI, BAKEMONOGATARI). Preorders begin October 2nd for both Volume 1 and 2 of the Blu-ray Box Sets with Volume 1 available on December 19th and Volume 2 on April 10th in 2018. Season 2 of the series is scheduled to begin streaming on October 14th on Crunchyroll.

The long-awaited English dub of March comes in like a lion will also be included in the Blu-ray Box Sets with an all-star English dub cast featuring Khoi Dao (Magi: The Kingdom of Magic, Sword Art Online the Movie -Ordinal Scale-) as main character Rei Kiriyama, Laura Post (The Asterisk War, KILL la KILL) as Akari Kawamoto, Kayli Mills (Occultic;Nine, Sword Art Online the Movie -Ordinal Scale-) as Hinata Kawamoto, and Xanthe Hunyh (anohana – The Flower We Saw That Day – TV Series, Puella Magi Madoka Magica the Movie –Rebellion-) as Momo Kawamoto. Back in May, Aniplex of America and Bang Zoom! Entertainment teamed up to host the Open Auditions at Anime Central (Rosemont, IL) for a once in a lifetime opportunity to be featured in the series. Bang Zoom! Entertainment announced on May 26th the Grand Prize winner, Kirsten Pingelly, who participated in the English dub recording of March comes in like lion.

March comes in like a lion Blu-ray Volume 1 incudes:

March comes in like a lion Blu-ray Volume 2 includes:

Rei Kiriyama is a seventeen year old professional shogi player.  Among the youngest in history to go pro, he has many expectations for the future, yet his recent separation from his foster family has left him conflicted and his career has stagnated.  However, after meeting a family of three sisters, color slowly returns to his life…

For details on March comes in like a lion, please visit: http://www.3lion-usa.com/

Produced by March comes in like a lion Animation Committee