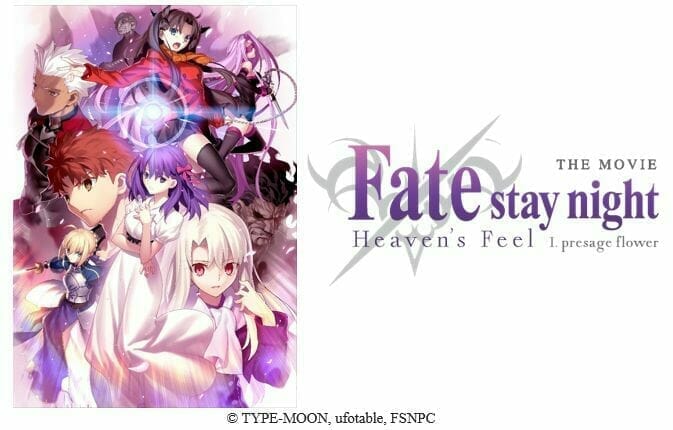 Aniplex of America announced that they will host a premiere event for Fate/stay night [Heaven’s Feel] THE MOVIE I. presage flower. Tickets for the event, which will be held on November 3, are available via AXS.

The premiere will be held at Los Angeles’ “The Theatre at Ace Hotel”, on South Broadway. Doors will open at 5:00PM Pacific.

“What shall come true… is one person’s simple wish.”

SANTA MONICA, CA (October 1, 2017) – Aniplex of America Inc. announced today at their industry panel at Anime Weekend Atlanta (Atlanta, GA) that the highly-anticipated film Fate/stay night [Heaven’s Feel] THE MOVIE I. presage flower will make its U.S. premiere at The Theater At Ace Hotel in Los Angeles, California on November 3rd. This movie will be the first feature film from the Fate series to receive a U.S. theatrical release and kick starts the new film trilogy based on the visual novel Fate/stay night. Tickets to the Los Angeles premiere event goes on sale today, with the promise of a nationwide theatrical release details to be announced at a later date.

Fate/stay night [Heaven’s Feel] THE MOVIE I. presage flower is the latest installment of the beloved Fate series by TYPE-MOON, and will be featured as an epic film trilogy that will finally unveil all of the mystery and bloodshed behind the high-stakes Holy Grail War. Based on the wildly popular Fate franchise that gave anime fansFate/stay night [Unlimited Blade Works], Fate/Zero, and the hit mobile game Fate/Grand Order, the first film in this movie trilogy explodes with epic action and heart-wrenching drama, tied together by original author Kinoko Nasu’s unique storytelling and otherworldly cast of characters. Fate/stay night [Heaven’s Feel] THE MOVIE I. presage flower prominently features the tragic heroine of Fate/stay night, Sakura Matou, as she desperately tries to hold on to the happiness she had at the Emiya household prior to the Holy Grail War. Movie-goers will experience the despair, romance, and terrifying secrets of the Holy Grail War with protagonist Shirou Emiya in the first chapter of this high-stakes trilogy.

Details regarding special programming and giveaways for the theatrical premiere will be announced as the premiere date approaches.

Tickets are available at: http://axs.com/events/343826/fate-stay-night-heaven-s-feel-north-american-premiere-tickets?skin=acehotel

About Fate/stay night [Heaven’s Feel] THE MOVIE I. presage flower:

“If I became a bad person, would you be able to forgive me?”

The boy wished to protect the girl. That was his thought.

10 years after the Holy Grail War—a battle waged by Masters and Servants over the wish-granter, the Holy Grail—another war breaks out in Fuyuki City.

There’s a young girl by Shirou’s side who’s in love with him—Sakura Matou.

Every morning, she goes to Shirou’s house to make breakfast and dinner for him, bringing kindness into the life of a boy utterly alone in the world.

But once the Holy Grail War starts, there’s a change in the air in Fuyuki City.

Murders abound across the city, and the atmosphere grows ominous.

Shirou decides to shelter Sakura in his home.

Along with Saber, the Servant he summons, Shirou allies himself with the mage Rin Tohsaka and takes part in the Holy Grail War.

But the battle starts to go awry as secret maneuvers by unseen forces are put into play.

Distributed by: Aniplex
Theme song: “Hana no Uta” by Aimer