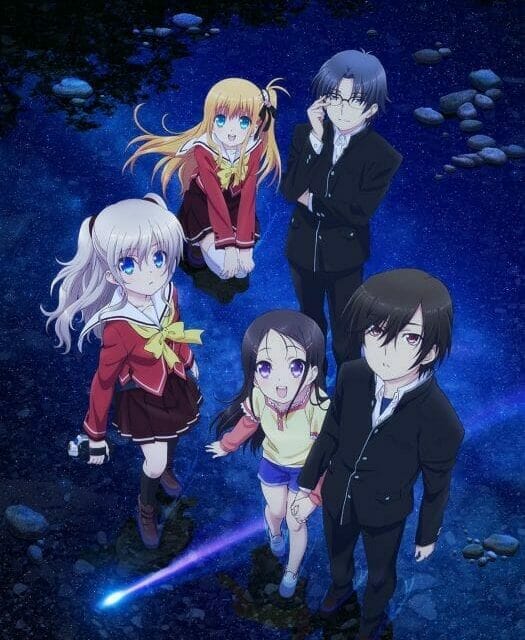 Aniplex of America announced that they acquired the domestic rights to Charlotte, Classroom Crisis, God Eater, and Wagnaria!! 3. The company plans to stream all four shows as simulcasts.

The premiere dates for each series is as follows:

SANTA MONICA, CA (June 24, 2015) –Aniplex of America Inc. announced today that they have acquired a total of four new anime titles to be joining their upcoming summer season lineup. These titles are Charlotte, Classroom Crisis, GOD EATER and WAGNARIA!!3. All of these titles along with the second arc of DURARARA!!×2 will be simulcast through streaming services such as the Aniplex Channel (AniplexChannel.com), Hulu (Hulu.com), Crunchyroll (Crunchyroll.com), DAISUKI (Daisuki.net), and Viewster (viewster.com).

Below are the details of each title’s simulcast schedule (specific times will be announced at a later date):

Very few adolescent boys and girls have an onset of special abilities. Yu Otosaka is one such man who uses his ability unbeknownst to others in order to lead a satisfying school life. Then one day, a girl named Nao Tomori suddenly appears before him. Their encounter reveals the destiny for wielders of special abilities.

This is a story written by Jun Maeda (Angel Beats!, Clannad, Kanon) of those gifted youth and how they spend their days of adolescence…

Fourth Tokyo–one of Japan’s new prefectures on Mars. Kirishina City, Fourth Tokyo’s special economic zone, is home to the Kirishina Corporation, an elite corporation renowned for its aerospace business. The company has been expanding its market share in various industries, while also running a private school, the Kirishina Science and Technology Academy High School. That alone would make it unique, but there’s also a high-profile class on campus.

Devoting themselves to their studies during the day, they then report to the company after school to take part in a crucial project, the development of prototype variants for rockets.

The story begins with the arrival of a transfer student to A-TEC.

The A-TEC members are ready to welcome their new classmate, but the student in question is kidnapped en route to Mars. Determining that they themselves will have to be the ones to overcome this crisis, Kaito and the A-TEC students embark on an unprecedented rescue mission.

Based on the hit videogame series by Bandai Namco Entertainment, the anime adaptation of GOD EATER will be produced by the renowned studio ufotable (the Garden of sinners, Fate/stay night [Unlimited Blade Works]) and directed by Takayuki Hirao (the Garden of sinners Chapter 5: Paradox Paradigm, Magical Sisters Yoyo & Nene).

Here is the domain of the mad gods.

In the early 2050s, unknown life forms called “Oracle Cell” begin their uncontrolled consumption of all life on Earth. Their ravenous appetite and remarkable adaptability earn them first dread, then awe, and finally the name “Aragami”. In the face of an enemy completely immune to conventional weapons, urban civilization collapses, and each day humanity is driven further and further toward extinction.

One single ray of hope remains for humanity.

Following the development of “God Arcs”—living weapons which incorporate Oracle cells—theirwielders are organized into an elite force.

For details on GOD EATER, please visit: GodEaterUSA.com or anime.godeater.jp

The story takes place in a certain family restaurant located in Hokkaido prefecture of Japan called WAGNARIA. Sota Takanashi is a high school student who ended up working part-time at this restaurant through strange circumstances along with his co-workers who are all more than a little eccentric.