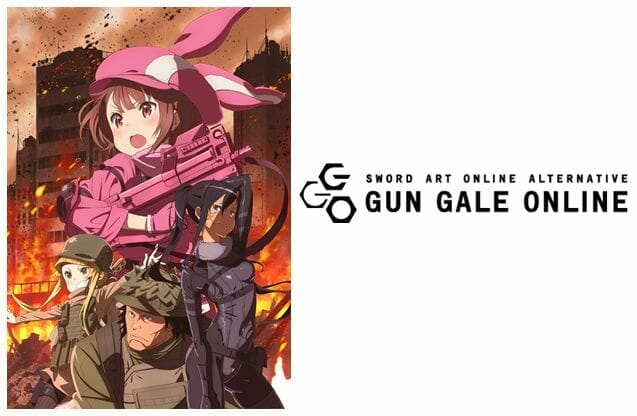 Aniplex of America announced that Sword Art Online Alternative: Gun Gale Online will receive an English dub, which will stream on Netflix and Hulu. The adaptation will star the following:

Alex von David is writing and directing the adaptation.

Enter the world of guns and steel with the Pink Devil  on Hulu and Netflix!

SANTA MONICA, CA (November 16, 2018) –Aniplex of America has revealed the English dub cast of the smash hit newcomer to Reki Kawahara’s Sword Art Online universe, Sword Art Online Alternative: Gun Gale Online. The announcement at the Aniplex of America industry panel included news that both the subtitled and English dub version of the show will be available on Hulu and Netflix. Based on the original work by self-proclaimed military and gun fanatic Keiichi Sigsawa, author of Kino’s Journey and gun consultant for Sword Art Online II, the series, hereafter referred to as GGO, premiered in April of 2018 with Japanese voice cast members Tomori Kusunoki (Slow Start, Marchen Madchen), Yoko Hikasa (The irregular at magic high school THE MOVIE –The Girl Who Summons the Stars-, WAGNARIA!!), Kazuyuki

GGO follows the tale of college student Karen Kohiruimaki, a devoted solo player who goes by the alias LLENN in the virtual shooting game, Gun Gale Online. Quickly gaining notoriety as the “Pink Devil” for her signature pink get-up and vicious agility, LLENN joins a battle royal style group combat, known as the Squad Jam, at the urging of a mysterious and beautiful woman named Pitohui. In an interview with Crunchyroll News at Anime Expo 2018, creator Keiichi Sigsawa describes the story as consisting of two pillars, “one is the game world that I wanted to depict: a world where people could engage in gun fights but no one had to die. The other would actually be the relationship between the two personas, Karen and LLENN; and the juxtaposition of an individual with a height complex playing a petite character online.”

Since premiering in April, GGO has received much acclaim from both fans and critics alike, attributing the series’ strong female characters and theme of escapism as a big draw in an article titled, “The Internet Still Can’t Believe How Good ‘Gun Gale Online’ Is” by Comicbook.com. In a piece featured on Polygon, Alyse Stanley writes, “the series posits, through gunplay action, that media featuring strong women doesn’t have to be beholden to a particular theme or look, that this entertainment should be as varied as the women watching it.” GGO has won numerous online fan polls including Anime Trending’s favorite action/adventure anime, top ending theme song, and best female character of the spring 2018 anime season. The series was also featured in Thrillist’s “The Best Anime of 2018” list noting that “while we still have a protagonist pulling off the impossible to succeed, [LLENN’s] wild pirouettes and ridiculous strategies are thrilling to experience on a moment-to-moment basis.”

In the world of guns and steel that is Gun Gale Online, LLENN has been a devoted, female solo player. She is obsessed with two things: donning herself entirely in pink and honing her skills with consistent game play. She soon discovers her love for hunting other players (a.k.a. PK), and begins to be known as the “Pink Devil.”

One day, LLENN meets a beautiful yet mysterious player, Pitohui, and the two click right away. Doing as she is told by Pitohui, LLENN enters the Squad Jam group battle.

Ending Theme: “To see the future” by LLENN (Tomori Kusunoki)

That Day-, NISEKOI, the OREIMO series, DURARARA!!×2, Magi series, Expelled From Paradise, The irregular at magic high school, and ALDNOAH.ZERO. The company’s ever-growing line-up of shows include: March comes in like a lion, Blue Exorcist: Kyoto Saga,

Work!, Rascal Does Not Dream of Bunny Girl Senpai, DAKAICHI –I’m being harassed by the sexiest man of the year-, and Sword Art Online Alicization. In June 2017, the company launched the English version of the popular mobile game, Fate/Grand Order, which has exceeded four million downloads.