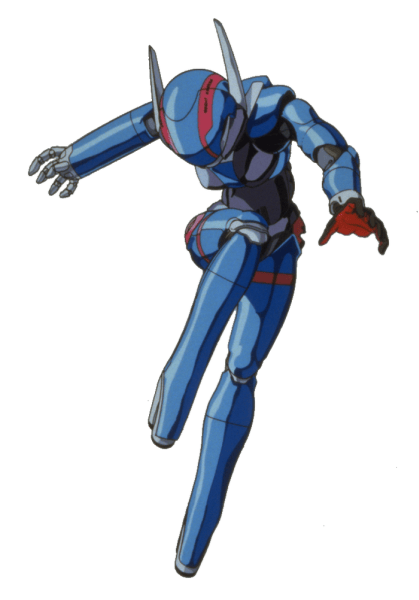 AnimEigo announced that their Bubblegum Crisis Kickstarter campaign reached its $75,000 goal in under 96 hours. The campaign is approaching the $100,000 mark as of press time.

The company originally launched the campaign for the Bubblegum Crisis Ultimate Edition Blu-Ray Set. The set would be a special limited edition of the series, released on two BD50 discs. It will contain the full eight episode run, both in English and Japanese, with English and French subtitles. In addition, the set will include the Hurricane Live! music videos, and the Holiday in Bali special. Confirmed extra features include:

The set will be produced by a method that AnimEigo CEO Robert Woodhead calls "CrowdProduction." Fifty percent of the amount raised goes into the production budget, and backers will be able to propose ways to use the budget to enhance the set further. The set is tentatively scheduled to ship in August, 2014.

Bubblegum Crisis Ultimate Edition Blu-Ray Set KickStarter reaches goal less than 4 days
AnimEigo is pleased to announce that the Bubblegum Crisis Ultimate Edition Blu-Ray Set KickStarter campaign reached its $75,000 goal in less than 96 hours, and is now approaching the $100k mark.
The Kickstarter funds a special limited-edition 2 BD50 set of the classic Japanese Anime Sci-Fi miniseries, which will contain all 8 episodes, in English and Japanese with English and French Subtitles. Also included are all the animated and live-action music videos, an online data archive of production notes, interviews, and high-resolution graphics, a custom challenge coin, and postcards — all for $50.
Unlike most KickStarters, this one has no stretch goals. Instead, AnimEigo is experimenting with “CrowdProduction” — a full 50% of the amount raised goes into the production budget, and the backers themselves will be able to propose ways to use the excess budget to improve the set. AnimEigo will cost out the proposals, and the backers will vote to decide what gets included!
The set will not be region-coded, and is available to backers world-wide (except Japan, China and Taiwan). Estimated shipment date is August 2014. The KickStarter campaign ends on Sunday, November 24th.
For more information, check out the KickStarter at: http://www.kickstarter.com/projects/madoverlord/bubblegum-crisis-ultimate-edition-blu-ray-set
About Bubblegum Crisis:
Bubblegum Crisis was one of the first titles AnimEigo released over 20 years ago. This classic 8-episode OVA series was created by a who’s-who of the Anime world, featuring character designs by Kenichi Sonoda (Riding Bean, Gunsmith Cats, Gall Force), production design by Shinji Aramaki (Appleseed, Full Metal Alchemist, Space Pirate Captain Harlock (2013)), direction by Katsuhito Akiyama (Armitage III), Masami Oobari (Detonator Orgun), Fumihiko Takayama (Patlabor III), Jun Okada, Hiroaki Gooda (Oh My Goddess!), music by Kooji Makaino (Oh My Goddess!), and mechanical designs by Sonoda, Aramaki and Hideki Kakinuma (Detonator Orgun).
About AnimEigo:
Established in 1989, AnimEigo, Inc. is not only one of the first companies to release Anime in the United States and Canada, but also one of the first companies to release significant numbers of high-quality Japanese live-action films. Over the last quarter-century, we have consistently broadened the market for Japanese films by finding audiences for entire new genres of films.
Renowned for the quality of our translations, subtitles, and dubbing, we have released many classic anime titles, including “Bubblegum Crisis”, “Urusei Yatsura”, “Kimagure Orange Road”, “Macross” and “Oh My Goddess!”.
AnimEigo is a private company located at Wilmington, North Carolina, USA.
Media Inquiries: contact [email protected]
Bubblegum Crisis Media Resources:
HD Music Video: https://vimeo.com/77863257
Color Artwork: http://www.animeigo.com/BGCUE/Color.html
Settei (Line Art): http://www.animeigo.com/BGCUE/Settei.html