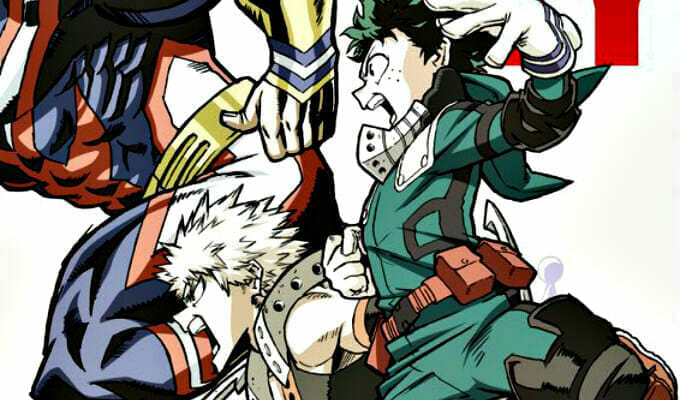 Funimation announced that they will stream the English first six dubbed episodes ofMy Hero Academia‘s third season day-and-date with the Japanese broadcast. The series kicks off on April 7. Crunchyroll and Hulu will both stream the show’s subtitled simulcast.

FLOWER MOUND, TEXAS – March 5, 2018. Classes are back in session and anime’s favorite super heroes in training have returned to U.A. High School for another exciting season of “My Hero Academia.” Funimation® revealed today that Season 3 of the top-rated series will premiere on Saturday, April 7, 2018. As with last season, the first six episodes of “My Hero Academia” will simultaneously stream on the same day and date as the Japanese TV broadcast – in SimulDub™ on FunimationNow in the U.S., Canada, U.K., Ireland, New Zealand and Australia and in subtitled simulcast on Hulu and Crunchyroll. All 25 episodes of “My Hero Academia” Season 3 will stream in SimulDub on FunimationNow and in subtitled simulcast on both Hulu and Crunchyroll.

“From rankings to polls to awards, ‘My Hero Academia’ was without a doubt, universally recognized – by both fans and media alike – as the best in anime in 2017. The series truly resonates with the superhero lore and pop culture representations that North American audiences grew up with and continue to gravitate to,” said Gen Fukunaga, CEO and founder of Funimation. “We’re excited to be premiering Season 3 on April 7 and to be able to once again simultaneously stream the first six episodes of ‘My Hero Academia’ in SimulDub on the same day and date as the Japanese broadcast.”

Ahead of the Season 3 premiere, Funimation will be releasing “My Hero Academia” Season 2 Part 1 on home video on Tuesday, April 3. Season 2 Part 1 will be available as a Blu-ray/DVD combo or a Blu-ray, DVD & Digital Limited Edition in a special chipboard box along with an assortment of collectible souvenirs including a 40-page art book and set of ten holographic trading cards. Also on this date, the English dub of Season 2 Part 1 (episodes 14-25) will become available to stream exclusively on Hulu.

“My Hero Academia” received countless awards and accolades for its second season from both fans and media alike – so much so that it won both IGN’s “Best of 2017 – Anime of the Year” and their “2017 People’s Choice – Anime of the Year” awards for Season 2.  Fans voted it #1 on Anime News Network’s “Best of 2017 Mega Poll.” Fandom selected it as one of “The 15 Best Anime of 2017.” Tor.com named it one of the “Ten Best Shows of 2017.” Gamespot.com ranked it #1 on its “Top Ten Anime of 2017.” Nerdist dubbed it the “Perfect Anime for American Comic Book Fans” and ComicBook.com awarded it the “2017 Golden Issue Award for Best Shonen Series.”

For more about “My Hero Academia” Season 3, including character information and how to “join the Academy” to receive exclusive news and information, visit funimation.com/myheroclass.

To watch new and past English dub episodes of “My Hero Academia” or purchase home videos and licensed merchandise, go to funimation.com/myheroacademia.

Past seasons of “My Hero Academia” are also available to watch on both Hulu and Crunchyroll.

About FunimationFunimation, a subsidiary of Sony Pictures Television, is the go-to destination for extraordinary anime.  By combining its integrated in-house studios along with its technology and distribution partnerships, Funimation leads the industry with its omnichannel approach to offering anime to fans – from streaming and home entertainment, to theatrical distribution and broadcast television. The company’s next generation streaming service, FunimationNow, provides subscribers with instant access to their favorite sub and dub shows in ad-free HD on the widest array of devices and platforms—from smartphones and tablets to TVs and gaming consoles. For more information about Funimation, visit funimation.com.