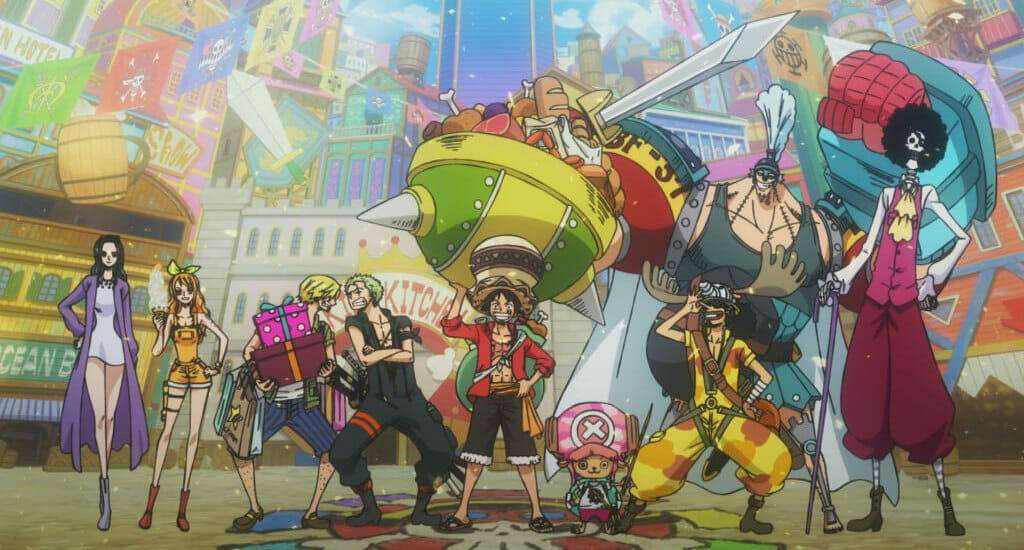 Funimation announced the main English voice cast for One Piece: Stampede, as well as the date of the film’s ticket presale date. Ticket sales open on 9/27/2019

Film Opens October 24 and Will Screen in Over 500 Theaters Across the U.S. and Canada During Theatrical Run

FLOWER MOUND, TEXAS – September 26, 2019. Ahead of tomorrow’s launch of “One Piece: Stampede” ticket sales, Funimation Films, the theatrical division of Sony Pictures Television’s Funimation, revealed today the English dub cast for the 20th anniversary One Piece movie. As first announced two weeks ago, the film will screen in both subtitled and English dub during its North American theatrical run which commences on October 24. Advance tickets for “One Piece: Stampede” will be available for purchase starting September 27, on the official movie website.

“One Piece: Stampede” is a stand-alone film and celebration of the anime series’ 20th anniversary that takes place outside the current “One Piece” storyline – so the movie can be enjoyed equally by both longstanding fans of the series and new anime lovers alike. Under the creative supervision of original creator Eiichiro Oda, “One Piece: Stampede” is directed by Takashi Otsuka and features character designs by Masayuki Sato.

Monkey D. Luffy and his Straw Hat pirate crew are invited to a massive Pirate Festival that brings many of the most iconic characters from throughout the franchise to participate in competition with the Straw Hats to find Roger’s treasure. It also pits the Straw Hats against a new enemy named Bullet, a former member of Roger’s crew.

For more information, visit the official movie website at funimationfilms.com/onepiecestampede

Funimation, a subsidiary of Sony Pictures Television, is a global leader in the world of anime.  A fully integrated, next-generation entertainment studio, the company’s fan-first philosophy is anchored in its omnichannel approach to its immersive offerings. From streaming and home entertainment to theatrical distribution and broadcast, Funimation’s commitment to character-driven storytelling, combined with tech innovation and key distribution partnerships, provides audiences with multiple and meaningful touchpoints to connect with this immersive world. FunimationNow, a next generation streaming service, provides subscribers with instant access to their favorite sub and dub shows in ad-free HD on the widest array of platforms – including smartphones, tablets, TVs and gaming consoles.  Funimation Films, the theatrical division of Funimation, acquires and distributes both anime and live action movies from prominent international filmmakers that appeal to the interests and passion of all types of fans. For more information about Funimation, visit funimation.com.