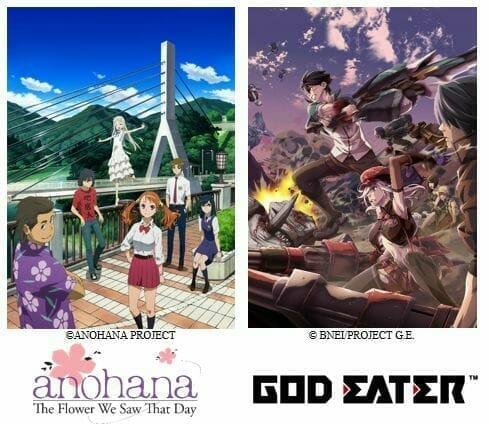 Aniplex of America announced that they will offer the English dubs for anohana – The Flower We Saw That Day and God Eater exclusively on Verizon’s go90 digital platform. Both dubs will be offered for free on the platform later this month.

Watch your favorite anime from Aniplex of America for free on go90!

SANTA MONICA, CA (September 30, 2017) – Aniplex of America announced at their industry panel at Anime Weekend Atlanta (Atlanta, GA) that they will begin exclusively streaming the English dub for anohana-The Flower We Saw That Day- and God Eater on Verizon Media’s go90 beginning October. This endeavour is exciting news for anime fans on a tight budget, as go90 does not require fees to stream their content. Some other titles expected to be available on go90 include Full Metal Alchemist: Brotherhood, Puella Magi Madoka Magica, Sword Art Online, Gurren Lagann, and Fate/Zero.

“We are very excited to be partnering with go90 – part of Verizon’s digital media network – to provide more opportunities for anime fans to stream their favorite shows,” says Aniplex of America President Shu Nishimoto. “Since anime is a relatively new venture for go90, we hope this partnership will be a perfect opportunity for more people to become anime fans.”

“We had the opportunity to screen the first episode of the Anohana dub at Anime Expo this year, and it was such a pleasant surprise to see how many folks in the audience were coming at the show totally fresh—they hadn’t watched it subbed, and didn’t know what it was about,” says Seitz. “It’s really encouraging to know that Anohana will have another chance to shine, and be important to a whole new group of viewers.”

“Some anime based on video games fail to recreate the original’s graphic quality,” writes Lauren Orsini from Anime News Network in a 2015 review. “God Eater is the opposite. After getting a chance to view some of the source gameplay, it seems apparent to me that God Eater has visually leveled up in anime form.”

About anohana -The Flower We Saw That Day- :

Jinta Yadomi and his group of childhood friends had become estranged after a tragic incident split them apart. Now in their high school years, an unexpected surprise forces each of them to confront their guilt over what happened that day. They must overcome the burdens of their past, and come to terms with years of shame, hard feelings, and heartaches.

In the early 2050s, unknown life forms called “Oracle Cells” began their uncontrolled consumption of all life on Earth. Their ravenous appetite and remarkable adaptability earned them first dread, then awe, and finally the name Aragami, the “Mad Gods.”

In the face of an enemy completely immune to conventional weapons, urban civilization collapsed, and each day humanity was driven further and further toward extinction.

The year is now 2071… the domain of the mad gods lies here in the Far East.

One single ray of hope remains for humanity. Following the development of “God Arcs”—living weapons which incorporate Oracle Cells—their wielders are organized into an elite force.

Verizon Media’s go90 is a streaming video service bringing you the best in live sports and originals. go90 is part of Verizon’s digital media network of video content and platforms, which includes AOL, HuffPost, Yahoo View, Yahoo Sports – and Complex Networks and more. go90 features 1,400 hours of originals from sought-after creators and talent and 25,000 hours of live sports and TV. go90 content can be viewed free from the app on iOS, Android or at go90.com.