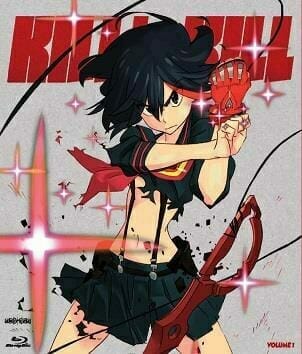 Aniplex of America announced that they will release Kill la Kill on DVD & Blu-Ray. The show will be released across five volumes, with the first containing the show’s first four episodes.

The first volume of Kill la Kill will be released in three versions on July 15, 2014:

Extra features on all three volumes include the textless opening, as well as Web Versions previews. The Limited Edition will contain a “Rearrange & Remix Soundtrack” CD by Hiroyuki Sawano, a postcard set, and a double-sided poster.

In addition to release information, the show’s dub cast was announced. The roles will be filled as follows in the English adaptation: 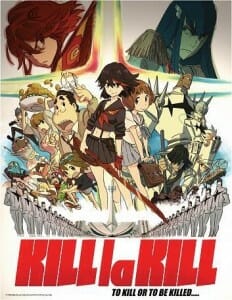 From the Creators of “Gurren Lagann” comes a Smash Hit Series Packed with Action, Comedy, Drama, and Even Nudists!

SANTA MONICA, CA (May 28, 2014) –Anime fans can look forward to a very hot summer this year as Aniplex of America announced today on their “Aniplex Live Show” the English voice cast and the physical release details of the hit animated series KILL la KILL. Aniplex of America has confirmed that they will release KILL la KILL on both Blu-ray and DVD in a total of 5 volumes with the first volume set for release on July 15th. The first volume will be featured in a Limited Edition (Blu-ray, DVD & Soundtrack CD Combo Set), Standard Edition Blu-ray, and Standard Edition DVD. Pre-orders for all SKUs will begin this Thursday on May 29th and will be available for sale in the U.S., Canada, Central and South Americas. Release dates for the other volumes will be announced at a later date on the KILL la KILL official U.S. homepage (www.KilllaKill.com).

All editions of KILL la KILL’s volume 1 will feature the first 4 episodes in both the original Japanese and English audios with English and Spanish subtitles. The bonus contents will include the textless opening sequences and the web version of the episode previews. The Limited Edition will also include the “Rearrange & Remix Soundtrack” CD by Hiroyuki Sawano, a set of 6 exclusive postcards, and a double-sided poster.

KILL la KILL is an original anime series from Director Hiroyuki Imaishi and writer KazukiNakashima, who collaborated previously to bring the equally popular Gurren Lagann series. Along with the magnificently bold techniques of studio TRIGGER, comes an anime series that Anime News Network describes as being “unstoppable, uncontrollable, and completely unhinged; about as fun as a show can be.” Since its simulcast began in October of 2013, KILL la KILL has grabbed the attention of anime fans with its unique story and characters that are in aclass by itself. OTAKU USA Magazine writes that KILL la KILL is an anime series that “will remind you why you became a fan of anime in the first place,” while Fandom Post describes it as “epic, spectacular, and exhilarating.”

The KILL la KILL Limited Edition will be distributed in limited quantities and will be sold only while supplies last.

All editions of KILL la KILL Volume 1 can be pre-ordered and purchased at:

Honnouji Academy — where the school is ruled by students clad in special outfits called Goku Uniforms. Deriding the student body as “pigs in human clothing,” Student Council President Satsuki Kiryuin, along with her loyal underlings, the Elite Four, has the academy under their absolute control. One day, a vagrant school girl named Ryuko Matoi appears and tries to get Satsuki, who recognizes her Scissor Blade, to talk. Was their encounter a mere coincidence or fate? The clash between the two will soon consume the whole academy!

For details on the series, please visit: www.KilllaKill.com