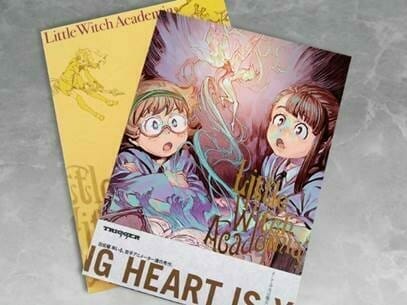 LOS ANGELES, CA., August 12, 2013 – acttil is excited to announce, on behalf of the animation studio TRIGGER, that preorders for the Collectible Edition of Little Witch Academia will begin today for fans worldwide at T R IGGE R ’ s Glo bal Online Sto re . The Collector’s Edition of Little Witch Academia will be shipped from Japan in September to international customers.

The Collector’s Edition will come with 1 Blu-ray disc that includes the 26-minute episode of Little Witch Academia and the never-before-seen 66-minute making-of video “How the Magic was Born.” This release will also come with an original soundtrack disc and an incredible 112-page art book. The inspirational making-of video follows the struggles and breakthroughs of the young animation team at TRIGGER, and the meticulous process they went through to create this anime. Not only will fans of Little Witch Academia enjoy the making-of video, but anyone pursuing a career in the animation field will find something to take to heart.

Story
Akko Kagari is an ordinary girl who joins the renowned witch academy for witch girls, Luna Nova Academy.
When she was younger, she went to Magical Festa, a magic show hosted by a witch named Shiny Chariot.
Akko was so mesmerized and inspired by Shiny Chariot’s performance that she dreamed to someday be a
“cool” witch like her. This young and impressionable Akko takes Shiny Chariot’s words as her own motto:
“Never forget, a believing heart is your magic.“ As part of a class, Akko and her classmates go into a
labyrinth under the Tower of Luna Nova. There, a sealed ancient dragon was unleashed by one of her
classmates. Akko tries to stop the dragon, but…

Get a sneak peek at the making-of video “How the Magic was Born” at www.littlewitchacademia.com!

PR/Marketing
acttil, LLC. was founded in Los Angeles, CA. in May 2013. Its main focus is to expand the network of people, products and services inorder to create new experiences and bring value to its audience. acttil is a videogame publisher, but also a curious entity that will take on any project the members of acttil think is interesting and valuable to audiences and customers.

Anime Production, Publisher
TRIGGER, Inc., is an animation studio founded by former GAINAX employees Masahiko Otsuka and Hiroyuki Imaishi in August of 2011. “If an anime title is like a bullet, we would like to be the trigger that helps propel that bullet forward,” said the founders of TRIGGER. They are best known for Inferno Cop, Little Witch Academia, and are now working on KILL la KILL, their first anime series for television.

Good Smile Company, Inc. is the global leader in Japanese hobby products and services, most famous for their unbeatable, high-quality character figurines and their involvement in a wide variety of products, including animation and video games.