Road to Ninja – Naruto the Movie To Get Theatrical Release 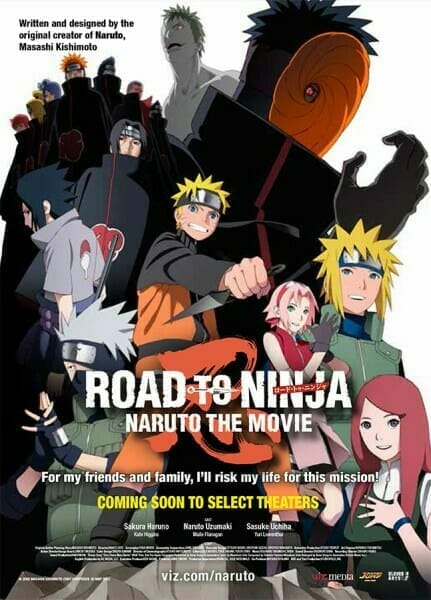 Viz Media announced that Road to Ninja – Naruto The Movie will receive a theatrical release. The film will be distributed to theaters in 45 cities across North America via a partnership with Eleven Arts.

The new film, which is the sixth in the massively popular NARURTO SHIPPUDEN feature film series, will premiere in more than 45 cities throughout the U.S. including New York, Chicago, Los Angeles, Houston, Seattle and other major locations. Tickets will go on sale starting Friday, July 11th. Additional ticket information and a complete list of theatre locations are available at:

In the latest NARUTO SHIPPUDEN feature film, long ago, a mysterious masked shinobi unleashed the Nine-Tailed Fox onto the Village Hidden in the Leaves to spread chaos and destruction. But the Fourth Hokage, Minato Namikaze, and his wife Kushina Uzumaki sealed the Tailed Beast into their newborn son, Naruto, to save the village, foiling the shinobi’s plan.

Years later, Naruto and his friends succeed in driving away the infamous Akatsuki, who have mysteriously returned from the dead. Upon returning to the village, the young shinobi are praised by their families for completing a dangerous mission. Reminded of how alone he is, Naruto begins to wonder what it’s like to have parents, when a strange masked figure appears before him – the same masked shinobi responsible for the death of his parents!

“ROAD TO NINJA – NARUTO THE MOVIE dives into the past and takes viewers on a fateful adventure depicting how Naruto and Sakura prevent one of their mortal enemies from stealing the Nine-tailed Fox Demon sealed inside the young ninja and fans will not want to miss this special opportunity to catch all the action in this special multi-city theatrical premiere,” says Charlene Ingram, VIZ Media Senior Marketing Manager, Animation.