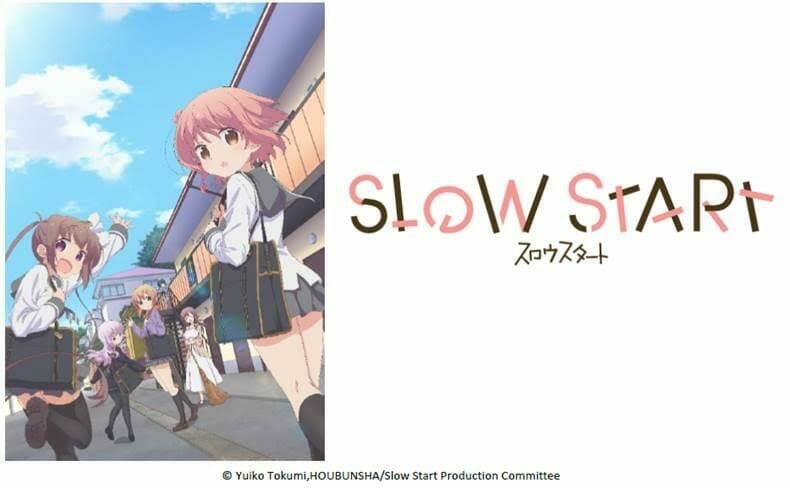 Aniplex of America announced that they will stream Slow Start on Crunchyroll as a simulcast. The series will launch on January 6, 2018 at noon Eastern (9:00AM Pacific).

Aniplex of America to Stream New Slice of Life Comedy, Slow Start, on Crunchyroll in January 2018

SANTA MONICA, CA (December 12, 2017) – Aniplex of America announced today that they will begin streaming the brand new anime series, Slow Start, on Crunchyroll beginning January 6, 2018 at 9 am PST. Animated by A-1 Pictures (Sword Art Online, Blue Exorcist) and directed by Hiroyuki Hashimoto (Magical Girl Raising Project, Is the Order a Rabbit?), the series is based on a popular 4-panel manga by Yuiko Tokumi in Manga Time Kirara, a seinen manga magazine from renowned publisher Houbunsha. In addition to being the first ever in Japan to put out a 4-panel manga magazine, Houbunsha is the publisher for another popular 4-panel manga series, BLEND-S, which served the basis for the smash hit anime by the same name in fall of 2017. Masato Anno (Eromanga Sensei, Saekano: How to Raise a Boring Girlfriend) is in charge of character design with music by Yoshiaki Fujisawa (Love Live! School idol project, No Game, No Life Zero).

“When I was first approached by the team at Kirara regarding a new series, I really wanted to create a cute and charming story that didn’t take itself too seriously,” says Series Creator, Yuiko Tokumi. “But when my editor suggested to make the series about ‘reaching for a goal like trying to win a tournament,’ I began incorporating that notion into the story.”

The series addresses an interesting stigma relatively unique to the Japanese culture known as being a r­onin­­­­­­­­­­­. The term, which is often associated in the U.S. as a term for vagabond samurai, refers to a person who has failed to get in to a school or company and must wait a year to try again. While the concept of a “gap year” is not foreign to the U.S., the Japanese education and hiring system, which only accepts new students or new employees during a limited time once a year, results in many young people being forced into an involuntary gap year. The main character is no stranger to this dilemma, as she finds herself a year late starting high school. Unable to bear the shame of being a year behind her classmates, she moves away to start a new life at a new school.

“Slow Start isn’t just a cute and fun story, it’s about the importance of emotional connections,” says Director Hashimoto in an interview about the series.

Thanks to her new friends and new acquaintances, the series explores many different forms of “slow starts.” The title, Slow Start, refers to not only the main character’s delayed start to high school but a larger theme of taking one’s time to grow up.

A kind-hearted girl, sensitive to others’ needs, but somewhat of a crybaby. For reasons yet unknown, she lives on her own in Temari Heights, which is an apartment building managed by her cousin, Shion. She is very gullible.

Always energetic, and she does everything at her own pace. Friendly to everyone. She is an otaku, being an avid bishoujo gamer and even attending the events as well. Also, talented in cooking! Her comments are oftentimes arbitrary.

“Hey, it might be a little out of the way but do you want to walk to the station with me?”

With excellent communication skills, she seems very mature. Being popular among her female classmates, her schedule may rather be jam-packed? She has met Kamuri once before, back in elementary school. Tends to say arbitrary things from time to time.

“My development is slower than others because I’m a late-bloomer, that’s all.”

She may be small in stature, but she loves to eat. Shy by nature, and is unable to speak articulately around strangers. Loves Eiko, and is extremely attached to her. Surprisingly, tends to say arbitrary things.

About Slow Start:
Hana Ichinose is a very shy and introverted girl about to start high school in the spring.

Information on Slow Start is available at: http://slowstart-usa.com or follow the official Slow Start USA Facebook page at facebook.com/SlowStartUSA.