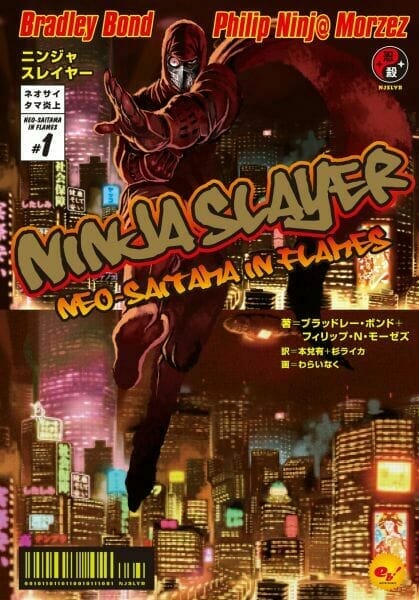 Starchild announced that they will create an animated adaptation of Ninja Slayer. The series, which was originally created by a pair of American authors, was translated into Japanese and uploaded to Twitter in 2010, where it garnered popularity with Japanese fans.

The title will be produced Kill la Kill creators Studio Trigger. More information and the first promotional trailer will be revealed at the Ninja Slayer & Studio Trigger panel at Anime Expo, which will be held on July 3, 2014 at 6:00PM.

LOS ANGELES, CA., June 20, 2014 – Leading anime voiceover and music company STARCHILD is thrilled to announce that NINJA SLAYER, a graphic novel that originated via Twitter and sold over 300,000 units (published by KADOKAWA Enterbrain), will be brought to life in animated form by the renowned animation company Studio Trigger. NINJA SLAYER was originally written by a pair of American authors and was translated into Japanese and uploaded onto Twitter in 2010. The subtle yet ridiculous ninja story soon became an underground hit, leading to the publication of the graphic novel in 2012.

The NINJA SLAYER anime will be produced by the incredibly talented, critically acclaimed, and ever-popular Studio Trigger, the same studio that created the anime series KILL la KILL. The world premiere of the promotional trailer will be shown at anime’s biggest convention, Anime Expo 2014 in Los Angeles, CA, during a NINJA SLAYER & Studio Trigger panel discussion on July 3rd at 6:00 p.m.

Anime Expo attendees will be able to catch a sneak peak of two never-before-seen NINJA SLAYER posters, as well as a chance to receive a “Menpo” (Ninja Slayer’s mask) and a samplebooklet containing the original NINJA SLAYER novel and a Comptiq* comic book from the GOOD SMILE COMPANY booth at Anime Expo 2014 (supplies limited). Attendees will also be able to purchase additional NINJA SLAYER goodies at the booth, a list of which appears below. Another big surprise awaits fans at the GOOD SMILE COMPANY booth! *Comptiq is a videogame/anime

Getting to know the creators of NINJA SLAYER

The original authors and creators of NINJA SLAYER, Bradley Bond and Philip [email protected] Morzez, will be featured interviewees on Tokyo

Otaku Mode on June 20th. Addition to the authors’ Q & A, the first 4 pages of the comic book will be revealed on June 27th to fulfill the anticipation of the series’ fans.

Kenji Fujikido is a salaryman whose wife and child were killed in a ninja turf war. In a brush with his own death, Fujikido is possessed by an enigmatic ninja soul known as Naraku Ninja. Fujikido cheats death and becomes “Ninja Slayer” – a Grim Reaper destined to kill evil ninja, committed to a personal war of vengeance. Set in the dystopian underworld of Neo-Saitama, Ninja Slayer takes on Soukai Syndicate ninja in mortal combat.

NINJA SLAYER was written by Bradley Bond and Philp [email protected] Morzez and translated by Yu Honda and Raika Sugi.

More anime info will be coming to the NINJA SLAYER anime site:  http://www.ninjaslayer-animation.com/

STARCHILD is a leading music label of King Records for animation, movies, voiceovers, and live action movies, and it is one of the mostrenowned and trusted label amongst anime fans in Japan. Their work can be found in Neon Genesis EVANGELION, Love Hina, and Toradora!