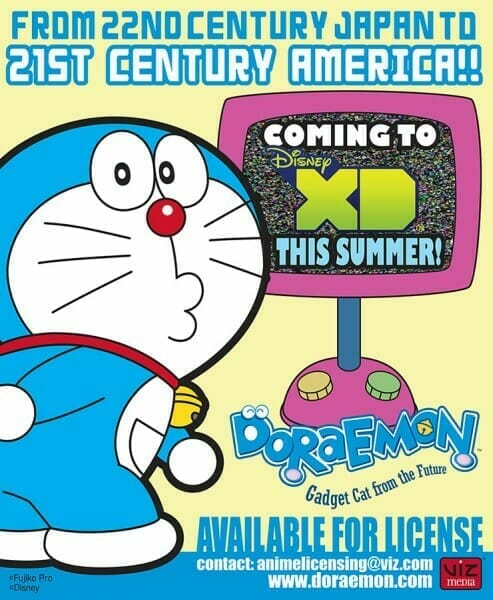 Shogakukan-Shueisha Productions (ShoPro) announced that Viz Media acquired the master merchandise license for Doraemon. The company will be able to offer Doraemon products in North and Latin Americas. Both Viz and ShoPro will highlight the series at the Licensing Expo, which takes place from June 17-19 in Las Vegas.

Doraemon is slated to hit North American airwaves this summer on Disney XD.

Tokyo, Japan, May 28, 2014 – Shogakukan-Shueisha Productions Co., Ltd. (ShoPro) has announced an agreement with their subsidiary, VIZ Media, LLC (VIZ Media), the largest publisher, distributor and licensor of manga and anime in North America, for DORAEMON merchandise rights for the Americas. VIZ Media will become the North & Latin American master merchandise licensee for the celebrated anime property, overseeing the licensing and development of a range of new products in all categories.

Both ShoPro and VIZ Media will be highlighting DORAEMON at the upcoming Licensing Expo, taking place June 17th-19th at the Mandalay Bay Convention Center in Las Vegas, Nevada, in the United States. Please visit them on the show floor at the DORAEMON booth, #P200.

Currently, DORAEMON may be found in North America through digital manga via Amazon Kindle, as well as game apps for mobile devices. A MEET! DORAEMON exhibit was also held earlier this year at the Bernice Pauhi Bishop Museum in Honolulu, HI.

The DORAEMON anime series is set to premiere in English this summer on the Disney XD channel. Dubbed English episodes will be seen for the first time in North America.

DORAEMON will be among the titles showcased at the 2014 Licensing Expo and available to potential product partners. For over 30 years, Licensing Expo has connected the worlds’ most influential entertainment, character, fashion, art and corporate brand owners with consumer goods manufacturers, licensees and retailers. The annual event is the premiere meeting place for the global licensing industry.

DORAEMON is one of the most beloved character properties worldwide and started as a manga (graphic novel) series created by Fujiko F. Fujio in 1970. It later became a popular anime series in Japan and product franchise that continues to be smash hit worldwide, especially in Asia. The comedy series depicts the adventures of Doraemon, a blue cat-type robot from the 22nd century traveling back in time to help a boy named Noby using various secret gadgets that comes from his Four-Dimensional Pocket. Episodes often offer simple lessons to young viewers about honesty, cooperation, courage, and respect.

DORAEMON marks its 45th Anniversary in 2015 and continues to be a major worldwide franchise with over $500 million in annual global retail sales and over 600 active licensees. Over 140 million copies of the manga have been published, and DORAEMON also holds the largest box office attendance record in Japan of any movie franchise, toppling Godzilla, with 34 feature films released to-date and over 100 million tickets sold last year alone. The property’s first 3D feature film, Stand By Me Doraemon, is set for release in Japan in August. The Doraemon character is also Tokyo’s bid to act as its Special Ambassador for the 2020 Olympic and Paralympic Games.

Additional information on DORAEMON and other titles and properties available can be found here: http://www.viz.com/.

ShoPro is a subsidiary of Japan’s largest publishing houses: Shogakukan Inc., Shueisha Inc. and Hakusensha Inc. Together, they distribute the majority share of the most popular magazines and comic books in Japan. ShoPro was founded in 1967 for the purpose of licensing and merchandising the properties owned by Shogakukan Inc. ShoPro has since experienced steady growth and expanded into two main sectors: the Media sector and the Educational Development sector. They represent some of the world’s most popular entertainment brands for the Japanese market. By maximizing the advantages of close relations to all Shogakukan group companies, ShoPro provides Shogakukan and Shueisha properties, as well as client companies overseas, with powerful licensing and merchandising programs supported by a comprehensive blend of selected media.