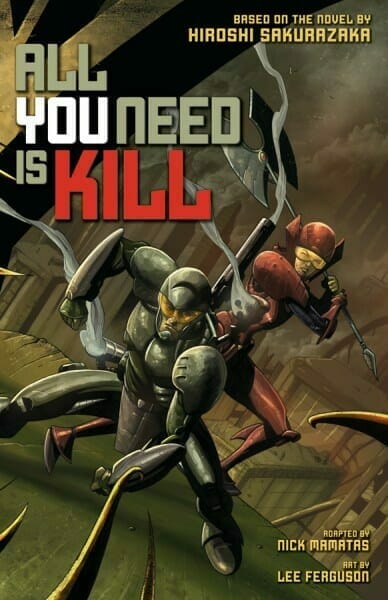 Viz Media announced their digital manga release calendar for May 2014. Highlighted titles include the following:

Full-Color Graphic Novel ALL YOU NEED IS KILL, Digital First Debut Of FOOD WARS! Vol. 2, The Return Of FATE/STAY NIGHT And FUTURE DIARY, Plus More! 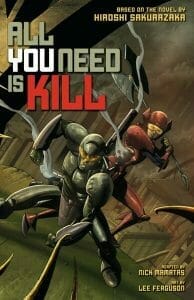 VIZ Media continues the push into spring as it announces its latest digital update, featuring the exclusive digital-first release of Vol. 2 of the hit culinary battle comedy, FOOD WARS!: SHOKUGEKI NO SOMA on May 20th, as well as the debut of an original, full-color, official graphic novel adaption of ALL YOU NEED IS KILL, the sci-fi action novel that inspired the forthcoming summer blockbuster Edge of Tomorrow starring Tom Cruise and Emily Blunt.

Notable additions also include the release today of PHANTOM THIEF JEANNE, Vol. 2 along with the final volumes for PSYREN (Vol. 16), STROBE EDGE (Vol. 10) and OTOMEN (Vol. 18). May 20th will see the release of the final volumes for BOYS OVER FLOWERS (Vol. 36) and KNIGHTS OF THE ZODIAC (Vol. 28). The climactic conclusions for Osamu Tezuka’s masterpiece, PHOENIX (vol. 12), along with the finale of the soccer drama, WHISTLE! (Vol. 12), are scheduled for May 27th.

Readers are also invited to catch the digital launch of FATE/STAY NIGHT and FUTURE DIARY. Both series were previously released in North America, and will be available once again beginning May 20th in a digital exclusive at an MSRP of only $4.99 each (U.S. / CAN).

Readers can enjoy these and many other new May manga updates available on VIZManga.com and the VIZ MANGA App for the iPad®, iPhone® and iPod® touch, Android-powered smart phones and 7” tablets, These titles may also be purchased through the Nook, Kindle, Kobo, iBooks and GooglePlay stores. These dynamic platforms offer fans the opportunity to explore and enjoy a massive catalog of new and classic manga titles that spans more than 2,000 volumes across nearly 200 different series.

When the alien Mimics invade, soldier Keiji Kiriya is killed, on the battlefield. But he wakes up the previous morning as if nothing happened and must fight the battle again…and again… and again. Teamed up with the mysterious female fighter known as the Full Metal Bitch, Keiji must figure out how to stop the cycle—and what role his new and deadly ally plays in the fight to save Earth.

New Title Available Later in May

Soma Yukihira’s old man runs a small family restaurant in the less savory end of town. Aiming to one day surpass his father’s culinary prowess, Soma hones his skills day in and day out until one day, out of the blue, his father decides to enroll Soma in a classy culinary school! Can Soma really cut it in a place that prides itself on a 10 percent graduation rate? And can he convince the beautiful, domineering heiress of the school that he belongs there at all?! Leaving home for the first time in his young life, Soma moves into the  Polaris Dormitory—a place run by an old crone and filled with crazy and eccentric students! Barely settled in, Soma quickly finds himself in one of Tohzuki’s legendary cooking duels—a shokugeki! Who will his very first opponent be?

The manga addition to the super-popular multimedia franchise has finally arrived! When he was little, high school student and amateur mechanic Shirou Emiya was adopted by a magus man.  Now he wants nothing more than to follow in his stepfather’s footsteps and become a hero of justice.  Little does he know that a war is waging among the Magi and that he is about to become its focal point. Vol. 2 debuts on May 27th.

Sakae Esuno’s chilling manga masterpiece is a relentless adventure that will have readers questioning the boundaries of time and space – and wishing for the slightest glimmer of hope in a dark, desolate world that may look surprisingly familiar. Yukiteru is a lonely student whose only hobby is the daily diary he keeps on his cell phone.  But Yukiteru has a secret that nobody knows about…his cellphone can tell the future! Now, a vicious game of survival is about to begin among twelve future diary holders – with the winner crowned god of the new world!Sakae Esuno’s chilling shonen masterpiece should not be missed!

The free VIZ Manga App continues to be the top application for reading digital manga and features a massive library of the most popular series in the world. Through the innovative VIZ Manga digital platform registered users are able to use one account to view their purchased manga across more devices than ever. New series and volumes are added every Tuesday. Fans can also find these titles and more for the NOOK, Kindle Fire, and Kobo ereaders, as well as in the iBooks and GooglePlay Stores.