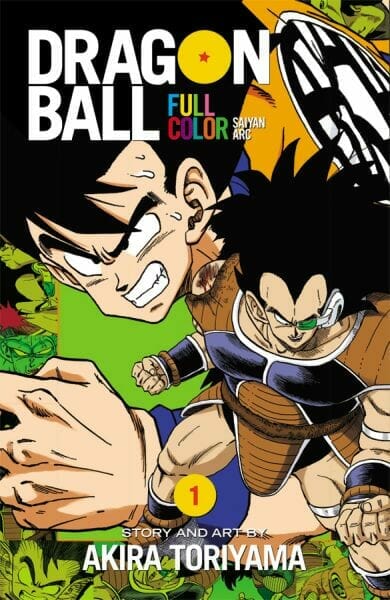 Viz Media announced that they will begin re-releasing Akira Toriyama's Dragon Ball manga in full color editions. The volumes, which will be priced at $19.99 per volume, will be presented in a larger 6 5/8" x 10 ¼” size. The first volume is slated to hit stores on February 4, 2014. 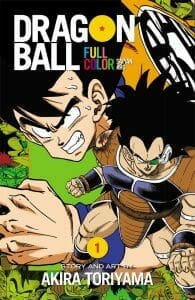 DRAGON BALL FULL COLOR Vol. 1 also will be available for digital download for $12.99 (USD/CAN) from VIZManga.com and the VIZ MANGA App for the Apple iPad®, iPhone® and iPod® touch, Android-powered smart phones, as well as through the Nook, Kobo, Kindle, iBooks and GooglePlay stores.

In the series, Son Goku is the greatest hero on Earth. Five years after defeating the demon king Piccolo, he’s grown up and has a family. But what is the real reason for Goku’s incredible strength? A visitor from outer space arrives bearing terrible news – Goku is an alien, and the visitor, Raditz, is Goku’s brother! When Raditz turns out to be a ruthless killer, Goku must fight his incredibly strong brother to save his family and the entire human race. A surprising alliance may be Earth’s last hope: Goku will team up with his old enemy Piccolo to save the world!

“Akira Toriyama’s bestselling manga series has thrilled generations of readers, and this new release lets fans revisit his groundbreaking martial arts action adventure in vivid full color,” says Mike Montesa, Editor. “Goku has become a skilled fighter, but new foes threaten his family and the Earth, and he must form new alliances in order to win the day. Fans current and new won’t want to miss the gorgeous new release of this classic series!”

Renowned worldwide for his playful, innovative storytelling and humorous, distinctive art style, Akira Toriyama burst onto the manga scene in 1980 with the wildly popular DR. SLUMP. His hit series Dragon Ball (published in the U.S. as DRAGON BALL and DRAGON BALL Z; both published by VIZ Media) ran from 1984 to 1995 in Shueisha’s Weekly Shonen Jump magazine. He is also known for his influential design work on video games such as Dragon Quest, Chrono Trigger, Tobal No. 1, and Blue Dragon. His other manga works include COWA! (also published by VIZ Media), Kajika, Sand Land, Neko Majin, a children’s book Toccio the Angel, and his newest series, Jaco the Galactic Patrolman.