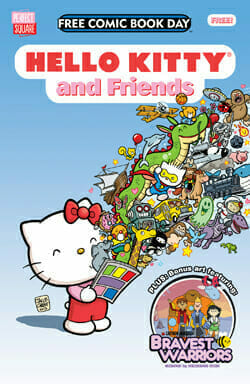 Viz Media announced that they will give away two titles on Free Comic Book Day. The company will offer a pair of samplers, one aimed as younger audiences, the other toward teens and adults.

The all-ages sampler will include a pair of stories from Hello Kitty: Just Imagine… a preview of Hello Kitty, Hello 40: A Celebration in 40 Stories, and select pages from Bravest Warriors: The Search for Catbug. All three titles are part of the company’s Perfect Square imprint.

The “teens and adults” sampler contains the first chapter of All You need Is Kill, as well as a preview for Terra Formars.

Visit And Support Local Comics Retailers On May 3rd To Receive 2 FREE Samplers Featuring HELLO KITTY®, BRAVEST WARRIORS, ALL YOU NEED IS KILL, And TERRA FORMARS!

VIZ Media is proud to be a supporter and sponsor of 2014 Free Comic Book Day, and participates this year with a pair of special FREE manga and full-color original graphic novel samplers from the all-ages Perfect Square imprint, as well as out-of-this world previews from its first Haikasoru original graphic novel and VIZ Signature.

Scheduled for Saturday, May 3th at thousands of locations nationwide, Free Comic Book Day is an annual promotional campaign in the North American comic book industry to help bring new readers of all ages and interests into independent comic book stores. Free Comic Book Day began in 2002 and is coordinated by the industry’s single largest distributor, Diamond Comic Distributors. Readers should visit freecomicbookday.com to find a local participating retailer in their area. 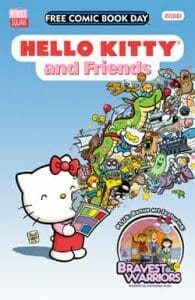 Readers of all ages can join in the fun with Hello Kitty and her friends in all-new full-color adventures! This time they’re letting their imaginations run wild in two stories from the upcoming HELLO KITTY: JUST IMAGINE…, scheduled for August 2014 (MSRP: $7.99 U.S. / $9.99 CAN). Plus don’t miss a special sneak peek of Perfect Square’s upcoming tribute book, HELLO KITTY, HELLO 40: A CELEBRATION IN 40 STORIES, celebrating Hello Kitty’s 40th anniversary and iconic cultural impact. Scheduled for Fall release (MSRP: $29.99 U.S. / $34.99 CAN).

A special Perfect Square trailer for Free Comic Book Day may be viewed at http://www.youtube.com/watch?v=jE-4DlsiWMc&authuser=0.

The VIZ Media 2014 Free Comic Book Day VIZ Signature manga sampler is aimed at older teen and adult readers and will offer excerpts from the new ALL YOU NEED IS KILL official graphic novel adaptation and the forthcoming manga series, TERRA FORMARS. 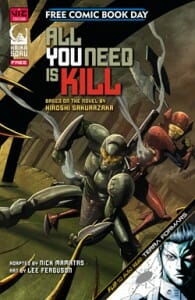 ALL YOU NEED IS KILL, AND TERRA FORMARS SNEAK PREVIEW!

Live…Die…Repeat… The mantra continues in exciting new graphic novel form and sci-fi and action fans are invited to preview an entire chapter from the new ALL YOU NEED IS KILL official graphic novel adaptation (May 6th debut, MSRP: $14.99 U.S. / $17.99 CAN). The gripping release from the Haikasoru imprint offers a single-volume retelling of the acclaimed ALL YOU NEED IS KILL novel, and is written by Haikasoru editor and noted sci-fi author, Nick Mamatas featuring full-color artwork by popular comic book artist Lee Ferguson (Green Arrow, Miranda Mercury).When the alien Mimics invade, Keiji Kiriya is one of many recruits shoved into battle armor Jackets and sent out to kill. Keiji dies on the battlefield, only to be reborn to fight and die again and again. He receives a message from a mysterious ally – is she the key to Keiji’s escape or his final death? The full ALL YOU NEED IS KILL graphic novel carries an MSRP of $14.99 U.S. / $17.99 CAN.

Manga fans can also catch an early peek of TERRA FORMARS, the tense sci-fi horror series created by Yu Sasuga and illustrated by Kenichi Tachibana that has become a bestseller in Japan (MSRP: $12.99 U.S. / $14.99 CAN). InTERRA FORMARS, the colonization of Mars is an epoch-making event, but an unintended side effect of the terra-forming process unleashes a monstrous horror that no one could ever have imagined… Look for its serialized debut this July in print and digital formats from the VIZ Signature imprint and VIZManga.com.

For information on other all-ages titles available from the Perfect Square imprint, please visit:www.perfectsquare.com.