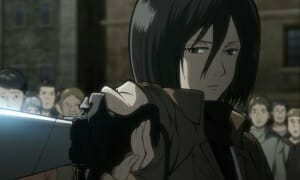 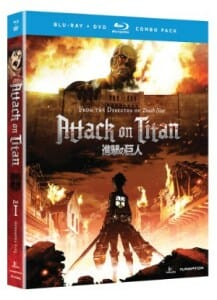 With the appearance of giant creatures known at Titans, humanity was all but wiped out. As a result, mankind’s last survivors retreated behind three walls, as a way to protect themselves from the monstrous Titans. After a hundred years of peace, the outermost of these walls, Wall Maria, is destroyed. The Colossal Titan crashed through the walls as if they were nothing, leading to the destruction of Eren Yeager’s hometown. Countless perished, and Eren was forced to watch his mother as she was devoured by the horrific Smiling Titan. It’s this turn of events that leads Eren, along with his adopted sister Mikasa and best friend Armin, to seek revenge on the Titans.

At its core, Attack on Titan is a simple “man vs monsters” story. With that in mind, though, this is not a show where viewers can just turn their brains off and enjoy.

While the premise has been done before,  Attack on Titan stands out through the strength of its writing and execution of its plot. The show does an excellent job of showing just how bad the world of the characters can be. It shows that, while people may live in relative safety from the Titans, they are not always living happy lives. The government restricts information about the world outside the walls, and technology either regressed back to, or hasn’t yet reached pre-Industrial times.

The strongest part of the writing lies with the large cast of characters that are introduced through the first half of the series. The cast is composed of archetypes that we have seen plenty of times in all forms of entertainment. While the characters may not rise above these set templates, the way the cast is written helps to humanize the cast members. They suddenly seem more like real people than balls of tropes and traits. Their reactions to the situations around them simply feels natural. 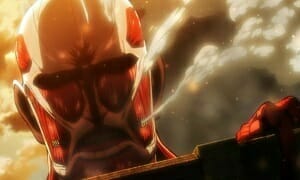 The writing also does a great job of setting up how humanity’s grown lax in the hundred years of peace. Soldiers are shown to be overconfident about the Titans’ inability to break the walls. The citizens, as a result, start to wonder why they still have a military force, if they are unable to complete missions outside the walls. They openly question whether the military are anything more than a waste of money and resources.

For all the areas where the writing and execution excel in the first half of Attack on Titan, the show drops the ball on pacing. The series has numerous pacing issues, which become especially apparent in the nine-part Struggle for Trost. There are periods where the action slows to a crawl, and the narrative is consumed  long-winded speeches that aren’t unlike those found in typical shonen shows.

Even when action scenes do occur, there are parts that are strung over multiple episodes, which could have been tightened up and greatly shortened. Flashbacks are also used several times through this first half, with the worst offender being a flashback in episode 6 that details Mikasa and Eren’s backstory.

Produced by Wit Studio, Attack on Titan has a strong European art style that pervades both its character designs and background art. The characters resemble those commonly found in Western cartoons. The backgrounds are detailed, especially with the buildings in cities, which have a historical European feel. 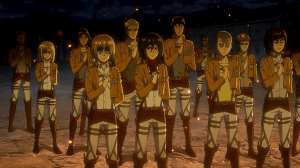 On top of this, the series does an excellent job of showing just how terrifying the Titans are. The horror they bring is not just for cheap shock value or schlocky scares. Rather, they deliver true terror. Their grotesque appearances dive headfirst into the uncanny valley, whether it’s the standard Titans or the Colossal and Armored Titans. Even the named Titans, though, while visually distinct from the rest of the pack, bring a similar amount of that unsettling “Titan” feeling when they are onscreen.

Animation, on the other hand, is mixed at best. The animation shines during the battles with the Titans, as they are fluid and well animated. Unfortunately, there are many times where stills and other forms of shortcuts are used in place of actual animation.

The music for the first half of the series is excellent, with the grandiose opening Guren no Yumiya and the subdued ending Utsukushiki Zankoku na Sekai. The background music is fitting for the setting of the series, and generally has solid composition.

The strongest aspect of the audio, though, has to be Funimation’s dub, which is easily one of their best. Director Mike McFarland brings out the best of each voice actor in the roles, and the dub as a whole is in on par with, if not superior, to the Japanese dub. Bryce Papenbrook, who voices Eren, offers one of the strongest performances in the dub. I’d like to argue that he is on par with Yuki Kaji, who voiced Eren in the Japanese version of the show. The other two main characters, Mikasa (voiced by Trina Nishimura) and Armin (voiced by Josh Grelle) are also on par with Japanese counterparts Yui Ishikawa and Marina Inoue, respectively. The only minor strike against the dub is the fact that the main characters sound too old in the first two episodes. At this point, the characters are still preteens. Still, even this knock against the dub doesn’t take away from the overall performance.

The first half of the series is packed with lots of on disc extras. The laundry list of features include audio commentaries for episodes 3 and 13, clean Opening and Ending, the Chibi Theater: Fly, Cadets, Fly! shorts, an eyecatch gallery, and trailers.

The longest of the on-disc extras is the nearly hour long “Making of Attack on Titan” featurette.   This is a slight misnomer, as it is doesn’t detail how the show was created in Japan, but rather how the dub was created. It covers a lot of different aspects of the localization process, and what goes into getting a show ready for release in North America. This covers the licensing of the show, picking the dub cast, and the creation of the dub scripts. The feature gives some attention to aspects of the production that tend to be overlooked in the average release. It should be noted that the “Making of Attack on Titan” does contain spoilers for the first part, as does the episode 3 commentary which contains spoilers for up to episode 9.