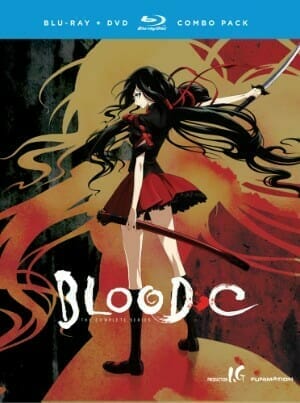 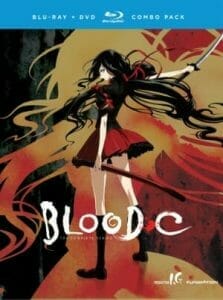 Blood: The Last Vampire is an interesting franchise. Since its creation in 2000, the property has undergone no fewer than five incarnations, in just as many formats. From the original film, to Blood+, to the 2009 live action film, fans have seen talented minds put their own touch on the universe of Saya and the world she inhabits. With Blood-C, manga legends CLAMP were given the honor of making Saya their own. Many feared that CLAMP’s creation wouldn’t have the same impact as its forebears, or that they would run in a direction that didn’t fit the rest of the franchise. These fears can safely be lain to rest as, while Blood-C does have many of CLAMP’s signature elements, the title can easily stand with the rest as an equal, and as a truly impressive anime series.

The series revolves around Saya Kisaragi, a young shrine maiden with a song in her heart and a fondness for a great cup of coffee. Like most girls, she attends the local high school, hangs out with her friends, and goes gaga over the village’s bad-boy heartthrob. She’s a friend to all and gives everything her all, even if she’s a bit clumsy.

Once night falls on the village, though, the world seems to change. Fierce demons known as Elder Bairns prey on the town’s inhabitants with impunity. They maim the weak and prey upon the innocent. As maiden of the shrine, it falls upon Saya to dispatch them with extreme prejudice. The normally sweet rose of the village bears her thorns to hunt these beasts with extreme prejudice. As she hunts, though, the Elder Bairns begin delivering a mysterious message to Saya: “Honor the covenant.” With nobody to turn to for answers, though, Saya must take it upon herself to discover what the covenant is, and how she is involved before the entire village goes to hell.

In its early episodes, Blood-C seems to battle between two 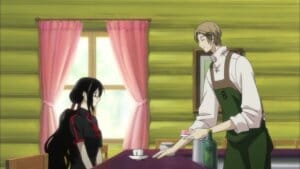 genres. The daytime segments of the show are presented as a slice-of-life comedy. They’re generally light in nature, and revolve more about building Saya and the cast, while advancing the core plot. Evening segments, on the other hand, are pure action.  The night-time is reserved for flashy, gory battles between Saya and the Elder Bairn of the week. These segments are fast, they’re flashy, and they’re incredibly satisfying. There’s a clean divide between the two and, early in the series, it seems as if the two will never meet.

Midway through the series, though, events take a particularly grim and unexpected turn, as the once-safe environments of the school and the shrine are turned into brutal battlefields where nobody is safe. The cheerful, laid-back segments in the early half of the series become little more than a faint memory, as Saya is drawn into increasingly dark and twisted turns of events. Bodies pile up by the half-dozen, and the battles become increasingly more brutal with each passing episode. Answers to questions create more questions, and the stakes in battle continue to escalate, until the series reaches a climax that few will see coming. 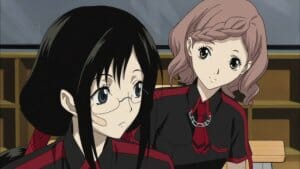 Much like the series itself, Blood-C’s visual style seems to trap itself between the two world of comedy and action. The daytime sequences tend to fall into the common slice-of-life trappings. The camera tends to focus on key shots or they’ll rest on character faces. Occasionally, this is broken by a trackign shot of one of the more impressive backgrounds. Animation in these scenes tends to be repetitive, be it a standard walk cycle or minor gestures during a conversation.  Once the action scene begin, though, this logic falls by the wayside. The battles between Saya and the various beasties that plague the village are slick, they’re stylish, and they’re oh-so-gory. These segments are impressively choreographed, as fights never place either party as “overpowered”,  and the outcome always feels as if it could swing either way. Like a gory ballet, these segments play out like a visceral, bloody dance that one can’t help but admire.

The visual style falls flat, unfortunately, once one begins to examine the characters themselves. Saya herself is a striking figure, her giant braids and glasses being distinctive and immediately recognizable against the striking black school uniform. The rest of the cast, though, is fairly bland. The cast, as a whole doesn’t stand out, and seems to fade into the background on most occasions. Their names are never important, and their roles in the show don’t progress beyond the generic labels of “friend,” “teacher,” or “family member” until absolutely necessary. The landscapes, on the other hand, exhibit a fantastic degree of personality. The scenic vistas of the village, moody interiors of the shrine, and even the simple décor of the Guimauve café all have a wonderful “lived-in” feeling to them. They do a fantastic job of both setting the mood for the series, and giving an identity to the nameless little town in which the show is set. 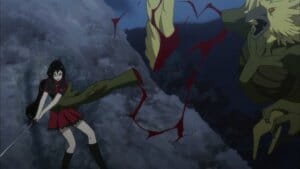 It would be a sin to discuss the series without giving a few nods to the musical presentation for the show. Music plays a vital role in setting the mood through the series, from heavy, string-laden themes in darker moments, to lighter themes during more comedic bits. Even moments of quiet travel tend to have a song that echoes through, as Saya will begin singing little nonsense songs to herself. The various musical themes are memorable, and do a good job of associating themselves with the show. The show’s opener, Spiral by Dustz, is a fast-paced rocking theme laden with humorous Engrish. While it is catchy, the song doesn’t fit the overall theme of the show itself. The closer, Junketsu Paradox by Nana Mizuki, is a far better match, with heavy string accompaniment and a moody vocal theme contrasting with the guitar riffs.

Despite a few minor issues, Blood-C proves to be a fantastic experience. The setting and the premise are fantastic, and the general pace is perfect for a series of its type. It’s a title that really shows CLAMP’s incredible talent, and should be a welcome addition to anybody’s collection.