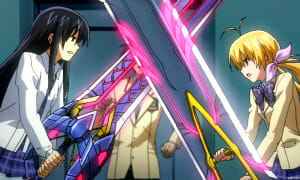 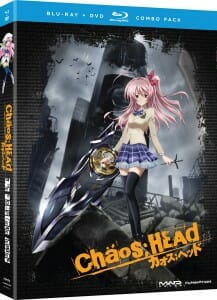 Alright well, hello there. I’m MJ Warren (aka TheEclecticDude if you follow me on Twitter), and I have recently been brought in as a monthly reviewer for Anime Herald. I take on my first assignment for the site with eagerness and interest…

Now don’t get me wrong, I don’t hate Chaos; Head. It is a show that I heard of, but hadn’t gotten around to. In that light, I appreciate the opportunity to take a look at it Still,I can’t help but feel a bit jibbed. I find Chaos; Head to be an interesting failure. It’s a show that, while flawed, drops the ball in an interesting way.

Chaos; Head tells the tale of Takumi Nishijo, a young high school student who, surprise, is a reclusive shut in and otaku. The isolation caused by these anti-social tendencies have left Takumi delusional. At his most extreme, the lad sees his favorite anime character, Sera, come to life. 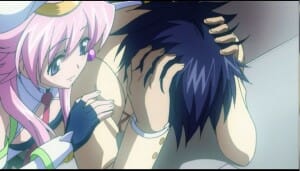 His already-loose grip on reality begins to slip further away one day, when he opens a link on a message board that leads to a grisly murder. The gruesome scene shows a pink-haired girl known as Rimi carrying out the deed as part of a phenomenon known only as “New Generation.” As fate would have it, Rimi transfers into Takumi’s school shortly afterwards, though she has no recollection of the horrid events that apparently unfolded. Little by little, it becomes evident that Takumi’s world might not be as it seems on the surface. But who can Takumi trust, and who can he trust to lead him from the garden of madness?

The core of Chaos;Head is an intriguing mystery story, which explores the very essence of Takumi Nishijo. Many of the ideas presented, which include precognition, psychoanalytical studies, and alternate realities are genuinely fascinating. Unfortunately, the series falls apart under the weight of countless questionable decisions. Unnecessary exposition of minor issues and an insistence on meaningless repetition grind the pace to a halt, while eating into the precious little time available. Many of the most promising elements are left to fall by the wayside, leading to an unsatisfying product of compromise. 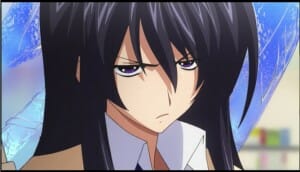 The show’s cast proves to be similarly problematic. I’ll be blunt, in saying that I dislike much of Chaos;Head’s characters. Takumi is an unlikeable person who somehow manages to be an arrogant jerk while constantly whining about his situation *despite* the fact that he can easily escape. The majority of secondary players prove to be little more than a collection of female archetypes, who have all the depth of a piece of cardboard. Nobody is portrayed as relatable, or even reliable throughout the series.

Mind you, an unreliable player can work in a limited sense. When the viewer is led to question the motivations of *everyone* in the series, though, it’s clear that something is very wrong. Of the entire cast, only Rimi and the mysterious General who apparently have the patience of saints to suffer through the show’s nonsense. 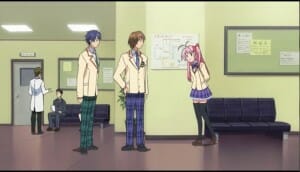 Thankfully, all is not lost. Madhouse was able to create a generally stellar visual presentation, which brings a delightfully unsettling atmosphere to the series. The action sequences are beautifully presented, with slick choreography and stunning animation. Though there are a number of wonky stills and repeated frames, these are easily overlooked.

The soundtrack is equally lovely, particularly in the show’s more tense moments. I particularly enjoyed Find The Blue, a rocking guitar theme that is the very embodiment of excitement. The English track dubs several songs to decent success. I have to give particular props to Stephanie Sheh, who steals the show with a lovely singing voice.

Likewise, Chaos;Head’s English dub proves to be a bright spot in an otherwise underwhelming experience. The cast delivers a strong performance, thanks to deft direction by Caitlin Glass and a competent script. 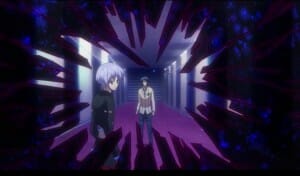 Carrie Savage’s performance as Rimi is, without a doubt, the strongest of the lot. Savage’s portrayal of the character plays up the innate creepiness, while also offering an underlying sincerity and innocence. I also like what Todd Haberkorn was able to do with Takumi. Though I dislike the character, Haberkorn fits the character well, maybe a bit too well at points.

Ultimately, Chaos;Head is an interesting failure. While the production values are strong, and the English dub elevates the work, these superficial elements can only take a work so far. While I personally didn’t enjoy the series, those who aren’t bothered by the topics I raised may find some enjoyment.