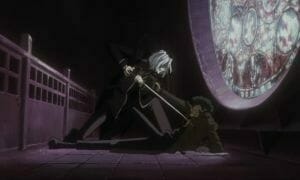 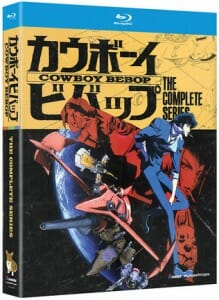 After several years off the market, Cowboy Bebop is finally back on store shelves. The series, which was a long-time jewel in Bandai Entertainment’s crown, all but disappeared when the company folded in 2012. FUNimation scooped the series up in August 2013, though few specifics about the release were given at the time the company’s big reveal.

Still, it goes without saying that people were excited as details began to trickle through the news sources.

Covering a show of this magnitude, of this degree of fame and reverence, though, presents a number of unique challenges. Those problems, though, can be distilled into one simple question:

How the hell do I review this?

What more can a person really say about Cowboy Bebop that hasn’t been stated thousands of times before? This is a series that defined a generation of anime fans. It’s a rare gem that went beyond the typical anime watcher, and pulled in audiences that normally wouldn’t be caught dead watching a cartoon, let alone one that’s from Japan. This was a series that controlled the narrative, and really grabbed mainstream audiences by the throat.

Back in the day, Cowboy Bebop was the subject of a lot of well-deserved praise. Fans and critics alike raved, as the show bubbled between the whimsical and the tragic without skipping a beat. Fans grinned as Spike faced off against the mysterious monstrosity from the fridge, or the Bebop Crew experimented with hallucinogenic mushrooms. They sat on the edge of their seats, as the crew squared off against eco-terrorists, and felt their hearts grow heavy as tragic bits of the crews lives came to light.

Reviewers gushed over the lovable main cast, and lively side characters. They commended the coherent, and impeccably executed visual style. Settings made wonderful use of color and props to frame the action, while creating a cohesive, appealing visual language that helped to give each area a distinct “lived-in” feeling.

The soundtrack, a collaboration between Yoko Kanno and Seatbelts, was heaped with utter adoration. Critics praised the jazzy tunes and gorgeous vocal pieces, which gave a distinct flavor to the universe. Even today, opening theme Tank! stands as a shining example of a lead-in, with its catchy melody and a brassy delivery that just begs to be remembered.

Then there’s the dub.

Cowboy Bebop‘s English dub was, and still is, seen as a high water mark for anime dubs. The stellar performances of Steve Blum, Wendee Lee, Beau Billingslea, and Melissa Fahn led critics and viewers alike to boldly proclaim that the dub had the potential to unseat even the original Japanese audio in quality.

It was, for a lot of people, a rare “perfect” anime series.

Even today, the show is a staple for anime fans. Those who haven’t seen it are few and far between, and those who have tend to bug the hell out of their friends that haven’t. Unlike a number of shows of its era, Bebop aged like fine wine. Every single iota of praise that Cowboy Bebop received in its initial release is just as relevant today.

When faced with a show of this stature, where everybody has seen it, and everyone adores it, the very prospect of reviewing the show as a whole seems like a fool’s errand. Any judgment on the show itself would just restate the obvious.

The FUNimation exclusive includes a package reminiscent of an old vinyl record, and comes bundled with a display easel and a series of art cards.

The Amazon exclusive is a bit more meaty, overall. The show is bundled in a clamshell case with a pair of artbooks. One book is a 140-page black & white collection of concept art and design sketches. The other is a 48-page color collection of key art and production artwork. 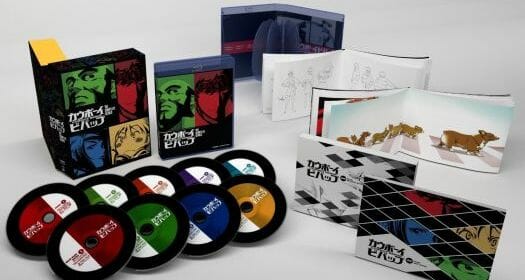 On-disc extras include audio commentaries, clean openings and closings, a pair of full-length renditions of Tank!, and the Ein’s Summer Vacation short.

In addition to this, though, the Blu-Ray release includes two documentaries that were filmed specifically for the new set.

The first of these features, Dinner Aboard the Bebop, is an hour-long reunion of the dub cast. It gives viewers a fly on the wall perspective, as the key cast members catch up on old times, talk about their favorite moments from the series, as well as how each of their careers began, and progressed post-Bebop. The tone is light, and the candid tone of the conversations really make the feature an enjoyable watch.

The feature ends with an eight-minute reading of a scene from episode 11, Toys in the Attic, which is just a fabulous way to see the cast off as it’s a fan-favorite episode, that really allows the cast to let loose and have fun.

The real highlight though, comes from Memo from Bebop: The Dub Sessions Remembered: a 95-minute film that traces the dubbing process of the series. New interviews and commentaries were filmed for the feature, which could easily have been offered as a new product on its own. The actors’ commentary is genuinely interesting, and the general presentation is simply impeccable.

That’s nice, but how does it look and sound?

The video was fully remastered, cleaning up the dirt and dingier imperfections found in Bandai’s release. This allows the show to shine once more, with vibrant colors that just pop, and a level of sheen that has the show looking as good as anything that’s been released in the past couple of years.

The audio uses a Dolby 5.1 mix in both the English dub and original Japanese. In both cases, the sound is mixed well, and uses the surround environment incredibly well. The audio is clear, with no audible distortion, crackling, or warping.

So… what’s the verdict?

Long story short, this is a series that can easily be recommended to anybody. Cowboy Bebop is still an utterly sublime experience, that belongs in every fan’s collection. At the same time, though, the enhancements and new content included in this release will make it well worth a double-dip for those who’ve purchased the series in the past.

There’s little more that can be said, save that Cowboy Bebop is a truly special experience, that really deserves a look, whether it’s for the first time or the hundredth time.