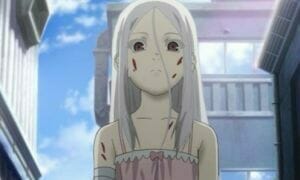 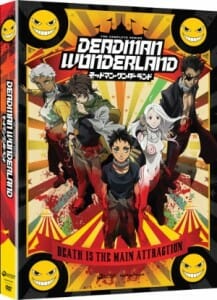 Before I begin the review itself, let me start by saying this is a very tricky review to write. I want to preserve your ability to enjoy the anime as much as possible, and as such I want to avoid spoilers to the best of my ability. However, to discuss Deadman Wonderland, I must review certain plot elements. In fact, I believe the solution is to write not one, but two reviews. The first will be entirely spoiler free. I simply discuss how I felt watching Deadman Wonderland and why you might wish to watch it. The second, will discuss the plot itself and reveal certain story elements.

By its nature, fiction requires a “buy-in”. It sets its internal rules and then sets the characters free to experience and react to them. As the viewer, we get to see them and judge the authenticity. When a character acts in a way contrary to his/her nature, it rings false. At its worst, you get “idiot plots” where characters act like idiots because the plot requires it. Deadman Wonderland dodges those traps. It is exceptionally well written (so much so that it was tremendously difficult to translate, leading to some amusing contradictions between the dubbing and the subtitles). All the characters ring true, and the more you learn about them, the more you understand why they are in the situation they’re in. Full credit to Jinsei Kataoka. More on this in a bit. Were I to give a rating purely to the writing, it would be a nine.

The next point is the animation itself. It’s gorgeous. I reviewed a standard DVD, so I’d have to presume the Blu-ray is magnificent. Kōichirō Hatsumi and the staff at Manglobe did an excellent job bringing the characters to life. The colors and technical details reminded me of Paprika. There is an issue that certain scenes take places in areas of poor lighting, so I’d recommend watching in as dark a room as possible. As with the writing, I’d give the animation a nine, and might have given it a ten if not for the technical limitations of DVDs.

Poor writing or animation can ruin an anime, but you still need a quality story. That’s the rub with Deadman Wonderland. It’s dark. Very dark. We’re talking 99% dark chocolate dark. If that sounds bitter to you, then you understand what I’m trying to convey.

Beyond merely being dark, though, there is an issue that Deadman Wonderland doesn’t complete the story. There is room for a full second season, perhaps more depending on the pacing. There are multiple elements from the manga that are only hinted at in the anime. If I hadn’t been aware of those elements, I’d probably be quite disappointed in the climax. As is, I still can only give the story an eight due to the number of key plot points that remained unresolved at the end of the season. Now, time for a more in depth review.

Or, maybe, Deadman Wonderland is just a sick and twisted game. The truth is, Deadman Wonderland is all of the above. It executes 29 schoolchildren in its third minute, and the killing doesn’t stop there. As Deadman Wonderland says: “Death is the main attraction.” The Deadmen themselves are a special group infected with a virus that grants them the power to control their blood and use it as a weapon. The virus itself was the result of a series of experiments that led to the destruction of Tokyo in the Great Tokyo Earthquake (also known as the Red Hole Incident).

If you want to watch the anime, be prepared to read the manga. There are numerous instances where the animators had to rush over characters or scenes that had relevance to the plot. Also, pay close attention to the pictures in the closing credits. All of them have relevance to the story and, if you want to unravel the mystery, they are quite helpful.

The characters themselves are quite engaging. Makina (the warden) in particular is remarkably straightforward. The first moment of levity in the series involves her reaction to an impertinent question from a prisoner. Jinsei Kataoka clearly had a lot of fun writing her. Speaking of the prisoners, they never have longer than 72 hours to live. They have a collar that will kill them if they don’t eat a foul tasting antidote, known simply as “candy”. Deadman Wonderland has its own currency, known as cast points (CP), and candy costs 100,000CP. If you pay close attention to the economics of Deadman Wonderland you’ll realize that it doesn’t really work unless “candy” is available via other means. It’s not a huge issue, though, as the plot has much deeper concerns.

The prison is not actually run by warden Makina. Deadman Wonderland is run by the director, Tsunenaga Tamaki. He’s a sadistic bastard, although remarkably childlike. There is another childlike character, Shiro, who is one of Ganta’s few friends in prison. She’s a unique character, though I can’t go into any further detail without massive spoilers. The anime only scratches the surface, so again, I must recommend the manga after watching.

As much as it pains me to reveal a major spoiler, I need to talk about the Carnival Corpse. The Carnival Corpse is quite literally a bloodsport, pitting two deadmen against each other for the amusement of online spectators who gamble on the matches. As bad as that sounds, there is a more nefarious purpose to the matches, but I’ll let you discover that on your own. The fights aren’t necessarily to the death, but the loser suffers serious consequences. Again, I’ll let you discover those on your own.

In the end, I give Deadman Wonderland an eight out of ten. It was only the second anime to convince me to read its source manga, the first being Arpeggio of Blue Steel. If you count the story as a whole (manga + anime), I’d give it a nine as the once you have a full perspective it is fantastic.

P.S. I watched the OVA, but I am not reviewing or grading it. It isn’t on the same level as the rest of the anime. Also, while I said Deadman Wonderland is free of “idiot plots”, there is a scene where we have information not available to the characters, and it makes the rest of the episode somewhat awkward. Finally, the extras aren’t particularly meaty. There are a few episode commentaries, but not from the key people involved in the series. I did enjoy the clean opening and closings though.