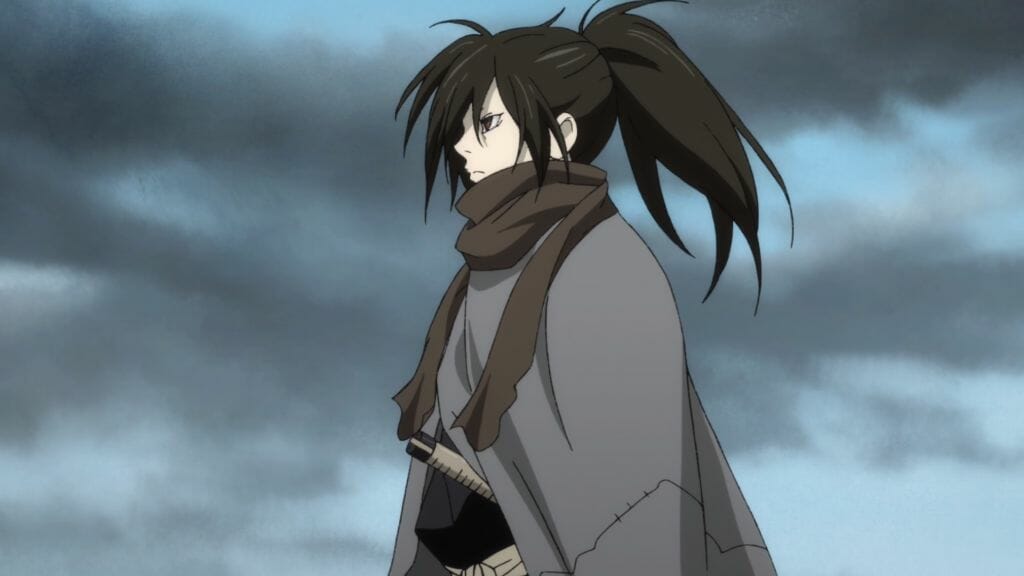 US Distributor: Amazon
Production Studio: MAPPA
Was this provided by the publisher? No
More Info: Anime Planet

Dororo begins on a dark and stormy night in feudal Japan.  A deal is stuck between daimyō (and candidate for worst father ever) Daigō Kagemitsu  and forty-eight sealed demons.  In exchange for money, power and prosperity of his kingdom, Kagemitsu makes the fiends an offer they cannot refuse. Each hellion is offered their choice of body part from the noble’s unborn child, of which they greedily partake. The baby’s hands, his feet, his eyes and even his tongue are snatched away one by one, until just a limbless husk is born from his mother’s womb.

The boy’s handmaiden sets the poor child adrift in a nearby river, allowing the currents to take him, Deep down, the woman wishes that he’ll find a better life somewhere, far away from the clutches of his heartless father. 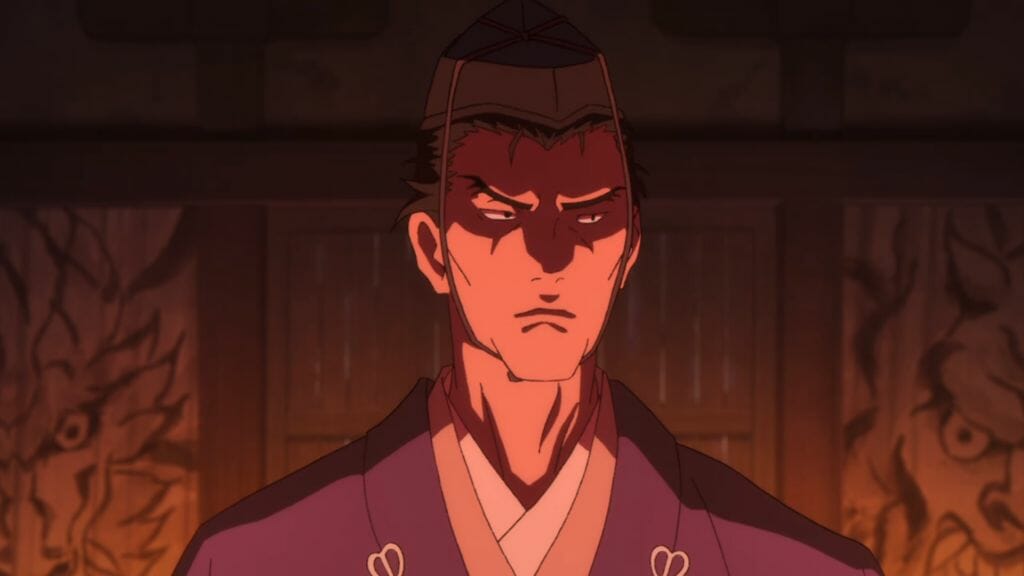 This was a single selfless wish that the fates took favor upon, as the unfortunate lad is found by a mysterious medicine man and possible mage known as Jukai. The man sets to work, replacing the boy’s lost limbs and organs with advanced prosthetics. As he raises the boy, Jukai also trains him in the ways of the blade. With a new lease on life and a firm grasp of mortal combat, the boy sets out to destroy those who stole his very being away, he’s given the name “Hyakkimaru” and departs to reclaim himself.

Along the way, Hyakkimaru encounters an impish orphan thief known only as “Dororo.” Be it divine will or some other force, the two find their paths converging, as they become fast travel companions in this macabre tale.

On the surface, Dororo is a supernatural horror story set in Japan’s Warring States period. The series is  packed with intense fight scenes, and battles bring forth buckets of blood without fail. A constant, unyielding war serves as a backdrop, and violence is as common place to the cast as breathing, at points. 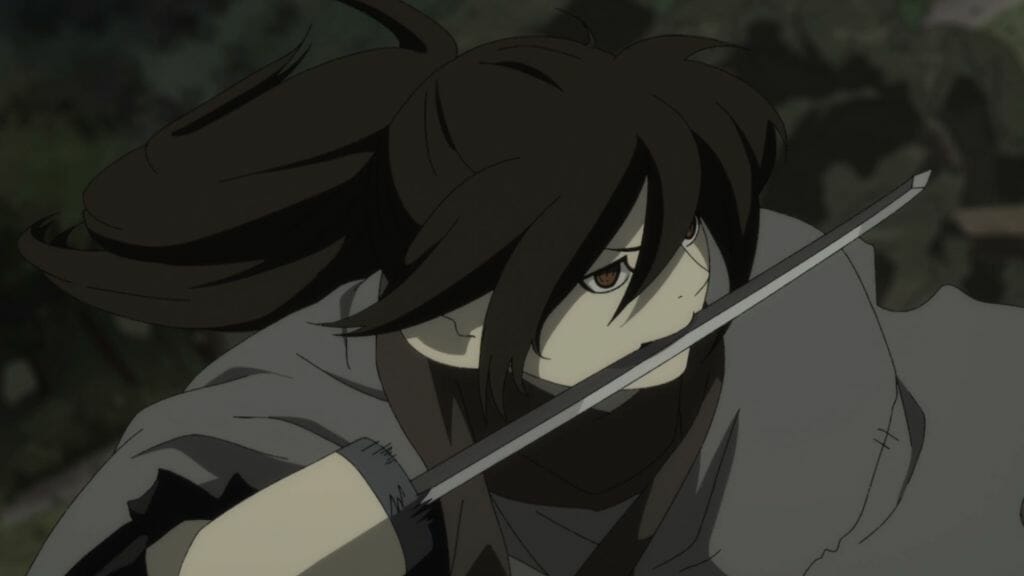 At its core, though, the series tells a tale far more layered tale. It’s a story about holding onto what we have left in the face of adversity, and finding the strength to put ourselves back together. The hard truths of humanity, from mankind’s insatiable lust for power, to their endless capacity for malice when desperation sets in, are laid bare.

Amid it all, though, Dororo reminds viewers to explore the world around us, be it by putting our feet into the fire, or by simply headbutting a mysterious stranger.

It’s these two realities, both the brutal and the beautiful, that create a truly compelling experience. Dororo’s most powerful moments come about when the series stops to depict normal people trying to survive. Whether it’s family members doing their utmost to find lost loved ones, or people willing to sell their bodies to make ends meet, it’s these moments that tell the real story of Dororo: war and greed bring suffering, which spreads like a virus without fail. 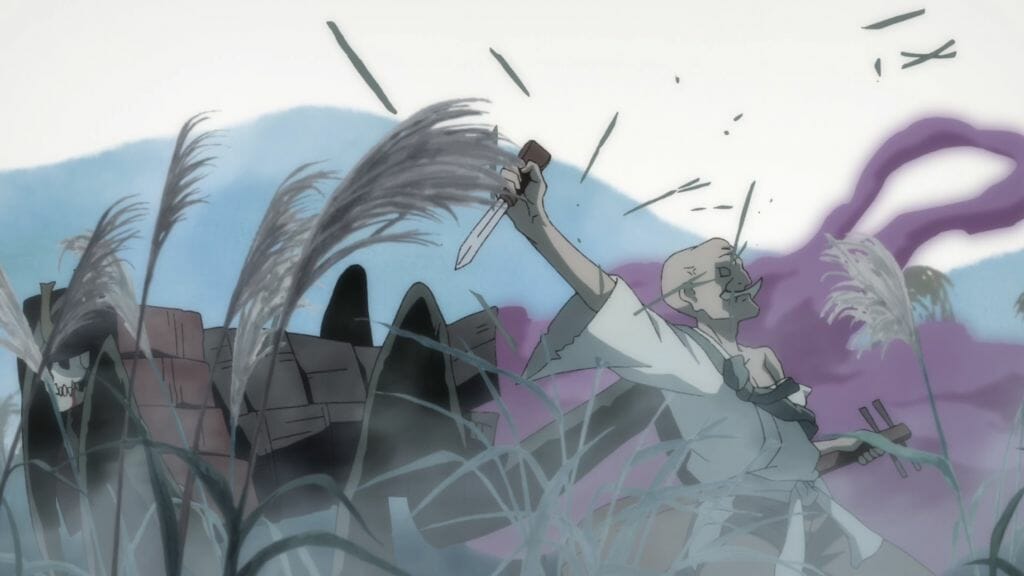 It’s this world where the two travelers navigate the boundaries of man and demon alike. Hyakkimaru is the perfect foil for his sprightly counterpart, serving both as a comedic straight man and a silent slayer of demons when needed. Dororo, meanwhile,  is a kind child at heart who is forced to do what she must to survive. There’s a certain chemistry and warmth between the two characters, which can be  felt their interactions, as well as seen through visual cues in Hyakkimaru’s sense of perception.

On a visual level, the team at MAPPA succeeded in crafting a gorgeous art style that draws viewers in, while remaining faithful to Osamu Tezuka’s original work. It’s a darker tone than previous adaptations, which uses a muted palette and watercolor backgrounds to create a stylish aesthetic that is as attractive as it is foreboding.

Sadly, like a forgetful storyteller, Dororo does stumble at points. While much of the show is presented and told beautifully, there are episodes that suffer from poor pacing, or from lackluster animation. This was especially apparent in the show’s finale. Much of the episode is beautifully presented, with a level of polish that exceeds the entire show leading up to it. This is all tossed to waste as the climactic final moments are portrayed by what is basically a massive, boring fire. In this scene, badass  Junkai appeared robotic, wearing an expression that read like he was ready to check out on a typical Tuesday while he was literally on fire. 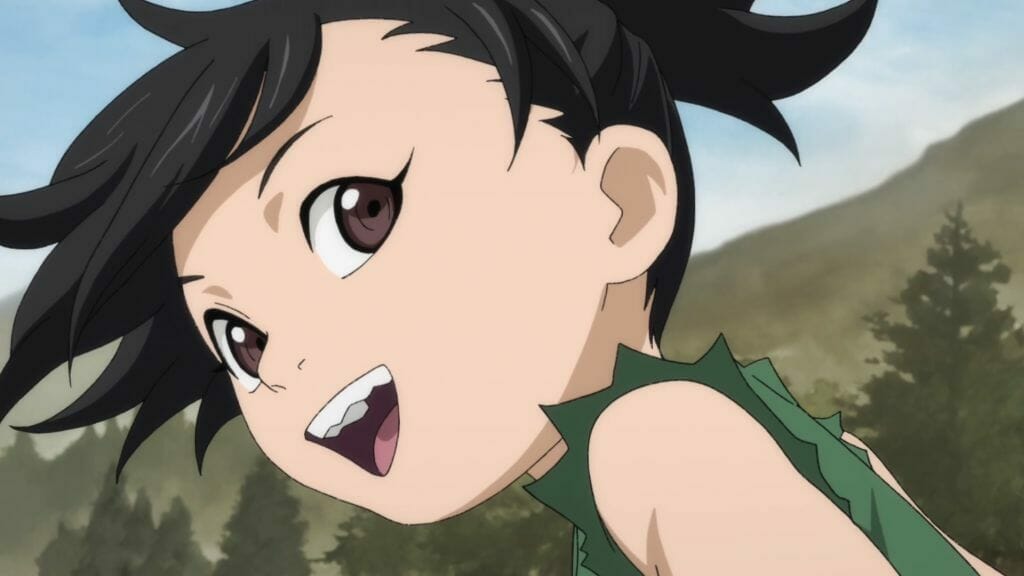 If anyone has seen the Mushi Pro’s 1969 Dororo anime, they’d certainly have some familiarity with the show’s iconic theme song Dororo no Uta. This plucky piece by Tomita Isao is warmly remembered, with its jaunty melody and a general tone that focuses on the war that rages throughout the story. The new series diverts from tradition, opting to use Kaen by QUEEN BEE, instead. This new intro is far less playful, and instead focuses on the major players. For fans of the original, this is a bit of a disappointment as QUEEN BEE’s theme doesn’t exactly “mesh” with the tone of the show. Still, it does grow on you.

That said, the show’s second ending, Yamiyo by Eve, was a far superior selection that stands out as the top track of the show. Take this with a grain of salt, though, as this I’m a pretty huge Eve fan, as it is.

While the show has its faults, it’s easy to overlook them against the the show’s many finer points. The show’s combination of the philosophical and the visceral, its willingness to ask difficult, human questions between bouts of demon slaying, proves to be more than enough to keep viewers hooked from beginning to end, That’s to say nothing of the sheer inspiration that comes from watching Dororo pull themselves up in the world. It’s a series that’s perfect for those who like being delightfully uncomfortable with humanity, while splattered in a crimson streak that is hard to resist.