Note: This review may contain spoilers. Reader discretion is advised.

In the year UC0088, Judau Ashta lives a peaceful life. He’s a junk dealer in Side 1’s Shangri-La colony . To Judau, sending his sister Lenia to a good school is all that really matters. Outside of Shangri-La, things haven’t been quite as  peaceful.

While the Gryps Conflict ended with the AEUG victorious over the Titans, their win was little more than a  Pyrrhic victory. Kamille Bidan was mentally crippled after the final battle, the majority of the AEUG’s military forces were destroyed, and  Char Aznable is missing in action, The power chasm from the Titans’ defeat allowed Axis, which now refer to themselves as “Neo Zeon,” to begin their conquest of the Earth Sphere. Judau and his friends lives are changed forever, when the Argarma docks at Shangri-La, and eventually joins the AEUG in stopping Neo Zeon from controlling the Earth Sphere. 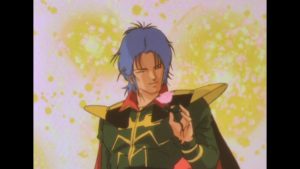 With Zeta Gundam being a massive hit with the fandom, it only made sense to continue the story of the Universal Century. Sunrise struck lighting with Zeta Gundam, as it was a sequel that made  massive improvements over the original story. Was Sunrise able to conjure that electricity a second time with  Double Zeta Gundam? Not exactly.

Well, at least not at the beginning.

Double Zeta Gundam has a reputation among the fanbase for its massive tonal shift from Zeta Gundam. For its entire run, Zeta Gundam was incredibly dark, unflinchingly showing the horrors of war and its effects on those involved in it. Double Zeta Gundam, on the other hand, takes a more comedic tone in the early parts of the show. This would not be as much of an issue if the show was a standalone series, rather than a part of the UC continuity. The fact that is part of the UC line, though, makes the change in tone a much greater problem. 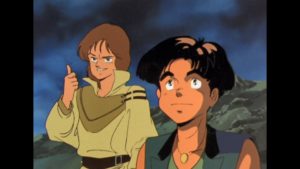 Notably, the tonal shift gives a first impression that the series cares more about wacky hijinks than the atrocities of war. That isn’t to say that there aren’t serious moments in the early episodes. Judau meeting a comatose Kamille in episode 2 and Ple killing of civilians in episode 19 are among  the more serious moments of this early arc.

Speaking of episode 19, this episode is a major turning point for Double Zeta Gundam. It’s the point where the show starts to take a more decidedly darker, more serious tone. To be honest, it’s a welcome change. 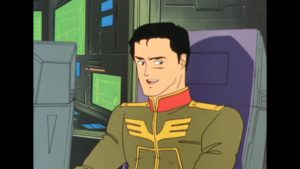 Not only does the shift give the show the gravitas it should have had from the beginning, but it also marks a sharp increase in the overall quality of the storytelling. The Africa arc, which covers episode 24 to 32, is a strong example of the improved writing in the later parts of the show. Not only does it does it display the effects that the Zabi family still has on people years after the One Year War is over, it also touches upon a topic that the Gundam franchise does not touch upon too often: race relations. In the two part episode “Blue Team,” we see the African Liberation Front, who want to free Africa from the control of the Europeans (read: white people). It’s a topic that fits beautifully in the context of a war show. Though this particular topic is only covered for two episodes, it really feels as if it should have gotten more attention throughout the entirety of the Africa arc. 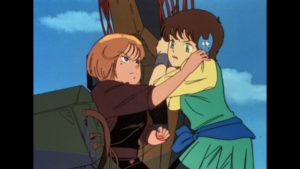 The show stumbles with its new main cast of characters. While Judau might get some sympathy for doing what he does for his sister, the fact that he’s willing to throw his friends/business partners/crew members under the bus for his own gain makes it hard to find him likable. This is also true for a majority of Judau’s friends who join the Argama. They, like Judau, will throw their friends under the bus for their own selfish reasons.

That is not say that the main cast doesn’t become likable as the show progresses, mind you. Judau starts to change for the better after Leina’a death in episode 28. The rest of the Judau’s friends start to grow around episode 38, once they  start controlling the Nahel Argama. 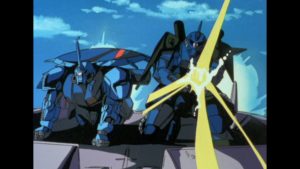 The characters’ issues aren’t just relegated to the AEUG’s side, of course. There are plenty of issues with some of the new characters from the Neo Zeon front. The biggest offender early on is Mashymre who, when we first meet him, is simultaneously driven to defeat the AEUG forces and obsessing over a rose given to him by Haman Kahn. Rather than stand as a menacing enemy for the AEUG, he comes across as a love-sick fool driven by his adoration of Haman. Thankfully, Mashmyre changes for the better at around episode 37, and begins to fill the shoes of the enemy he should be. It’s at this point that we find out he was responsible for the colony drop on Dublin.

Though there are issues with the new cast, the small amount of returning cast members make up for their issues. Granted, most of the returning players don’t develop more from their personalities in Zeta Gundam, the one returning cast member who we do get to see more of is Haman Kahn. Through Double Zeta Gundam, we learn that , while she wants power at any cost (to the point that she’ll use anybody to get it), we also see that she wasn’t very different from Judau in her teenage years.

Though it aired just a few days after Zeta Gundam finished its run, Double Zeta Gundam are a stark improvement in production values from its predecessor. Character designs, mobile suit designs, and the overall animation quality all look better than Zeta Gundam.

Granted, the 80’s clothing looks dated by today’s standards, but the overall style of the show allows Double Zeta Gundam to still look great in 2018. Though the scale of the battles is smaller than its predecessors, or even the titles in the franchise to come, the combat we see is still enjoyable today.

Is Double Zeta Gundam a bad TV series? Far from it. Still, it’s also not the UC storyline at its finest. While the series makes clear improvements once it starts to get away from its comedic start, it takes too long for this shift to happen. To see things finally get serious near the halfway point feels like a waste of  the potential it had to build upon at the end of Zeta Gundam. The case isn’t really helped by the generally  unlikable cast of characters. That said, should you check Double Zeta Gundam? I’d still say “yes, with a but.” Be prepared to  slog through tedious comedy to see the diamond in the rough that this series really is.