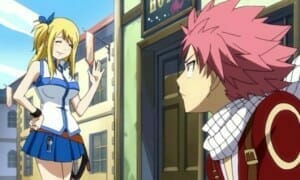 US Distributor: FUNimation
Production Studio: A-1 Pictures
Was this provided by the publisher? No
More Info: Anime News Network 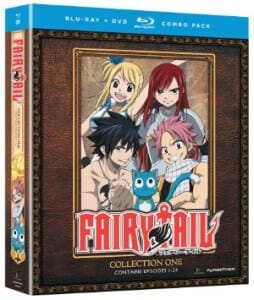 As I looked into the abyss of the Herald’s comment section, I couldn’t help but notice a question in one of our podcast posts. “Why do we dog out so much anime,” the reader asked. Mike replied, commenting that we see so many bad titles, that it’s easier to recall the bad shows than the good at times. The commenter asked about Fairy Tail, to which Mike noted that the show has strong characters. It made me curious. As the show was on Netflix, I figured I’d watch and see how it was for myself.

I’m actually glad I did.

The series follows Lucy, a wizard and huge fan of the Fairy Tail wizard guild. During her journeys, she’s tricked into believing a con man named Salamander is a member of Fairy Tail. As it turns out, though, Salamander is actually a member of a slavery ring, and he intends to sell Lucy (and many other women) as part of his organization’s wares. She is saved at the last minute by a mysterious lad named Natsu, who informs Lucy that he can take her to the real Fairy Tail guild. What follows is one journey after another with Lucy, Gray, Natsu, and Erza as they explore the all they can, from the epic sights of the world, to the depths of their own lives. 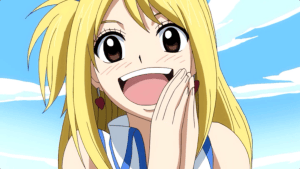 On a visual level, Fairy Tail is a typical shonen show. The man all sport six-packs and the women are busty, skinny and generally gorgeous. As one would expect, the cast itself tends to be visually uninteresting, outside of a few stand-out villains and side characters. There are a few interesting touches here and there,  but the overall style tends to be fairly same-y.

Coming into the series, I thought the animation was going to be “okay.” You know, stiff movements and  a few cheap tricks to save on costs, since the show runs for over a hundred episodes. And, while this is indeed present to a degree, the animation tends to be more than tolerable during fight scenes. A number of fights surpass even this, and present themselves as quite attractive.

The characters themselves tend to provide some of the brighter aspects of the show. The major players start out as fairly generic archetypes. As the series progresses, though, they begin to grow into strong, charming individuals. Gray, for example, starts out as the token “handsome male.” Natus is the strong, yet dimwitted guy. Lucy is the  smart girl who lacks the brawn of her male counterparts,  Erza is the super tough girl.

As the show continues, these characters begin to show some depth. Layers and motivations are revealed to viewers as the story digs up the past of the major cast members.  Through these early episodes, Gray, Lucy, and Erza get the most development, mostly in the form of flashbacks. Here’s the kicker, though: the flashbacks are done well! Unlike other shows in the genre, like Bleach or Naruto, Fairy Tail tends to work these segments deftly into the main narrative. 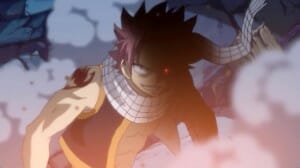 Most of the show’s story arcs in these first 48 episodes were relatively short. They tended to clock in between 4 and 9 episodes in length, which is refreshing when coming off of Bleach or Naruto, whose major story segments run for far longer. If there were any complaint that could be made, it would be that the writers, for some reason, start setting up the next major plot arc too early. Plot points and foreshadowing tend to be dropped midway through the current arc, which tends to kill the tension of some of the higher-stakes battles.

Fairy Tail seems to have its heart in the right place, though the show tends to be light-hearted to a fault. There’s hardly any weight when trouble arises. Characters proclaim that a certain thing, be it an object or some other MacGuffin, could destroy the world (or at least kill thousands of people), but it’s just not really felt half the time.

Overall, though, Fairy Tail has many of the same trappings and tropes as so many of its shonen brethren. What sets it apart is its ability to cut down on the groan factor associated with it. The show usually sits on the south end of the “wow” spectrum, but interesting characters and plot arcs more than make up for this. Fans of shows like Naruto, One Piece, or Dragon Ball Z will find much to enjoy in Fairy Tail, though others may be better off skipping this one.