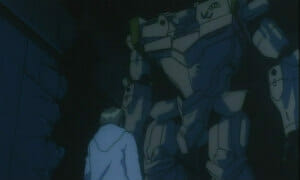 Of course, Japan is the first country to create bipedal armored vehicles for military use, a.k.a. mechs. In Gasaraki, they’re called Tactical Armor (“TA” for short). TAs are superior to tanks in both speed and maneuverability, but most soldiers don’t have the endurance to pilot them. Luckily, Yushiro, the youngest son of the powerful Gowa family behind the development of TAs, shows promise as a TA pilot despite being only a civilian.

Naturally, like every well-established Japanese family in anime, the Gowas have a secret. After running into Miharu, a mysterious green-haired girl and fellow pilot, Yushiro uncovers the past of the Gowa family, and learns what TAs have to do with the ancient power of Gasaraki.

It’s difficult to discuss this series without bringing up comparisons to Neon Genesis Evangelion. When it comes to the nature of the TAs and Yushiro’s identity, as well as the trippy mind dive in the final episode, it’s clear where Gasaraki was drawing inspiration from. With that in mind, Gasaraki does manage to differentiate itself from anime that came before it in the way it delivers its narrative.

Between various military personal shouting vital signs reports, Gasaraki’s storyline is delivered through news broadcasters and men in suits having meetings in dark rooms. It’s fair to pin Yushiro as the protagonist of the story since he’s on the DVD cover, but he doesn’t even speak for the first few episodes. Characters and their development are not a concern in this series. The characters are just there to populate the intricate setting of Gasaraki. It takes at least five episodes to discern which characters are the important players, and which are just talking heads. Because of this, Gasaraki quickly becomes one big monotone info dump, where who is talking isn’t as important as what’s being said.

This series is an alternative history imagined through the lens of Japanese nationalism, where Noh theater has the power to warp dimensions and human experimentation is just another part of the mech arms race. Despite those aspects of the series sounding intriguing, though, they are not the focus. Inflation and immigration, among other factors of economic strategy, are at the heart of Gasaraki’s plot. So, if the world politics of grain prices doesn’t sound entertaining, then this probably isn’t the show for you.

Gasaraki’s visual style is incredibly drab. Most of the series takes place at night or in poorly lit rooms. This is clearly done on purpose and not just for the sake of a melancholy mood. The relationship between dark and light ties into the series’ themes of Japanese nationalism and Gasaraki’s muddy color palette manages to illustrate to great effect. This isn’t the only aspect of Gasaraki’s visual appeal.

There are a few prerequisites needed to enjoy Gasaraki. You need enough interest in world history to know that Belgistan isn’t a real country. Then you need to have enough interest in Belgistan to distract from the fact that Yushiro has the personality of a doorknob. A fondness for military green and the sound of panting in cockpits is not required, but preferred.

I didn’t find myself bored during the show, just utterly indifferent. Its issue with telling, rather than showing, had me thinking the story might work better as a fictional newscast over the radio, than as a full anime. Gasaraki gives you no reason to care about its characters, on purpose. Whether or not its version of history and take on politics can make up for that choice is highly dependent on how much you care about those things in the first place.